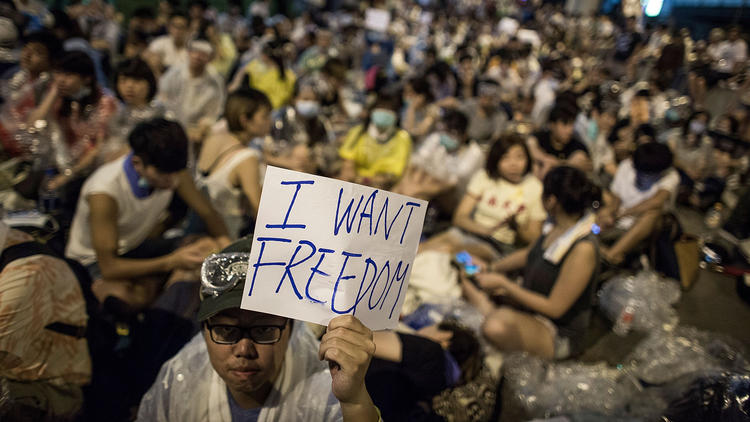 Calls for democracy amidst a tightening of Communist control create uncertainty for China’s political future.

Since Xi Jinping became President of China in 2012, China’s political landscape has changed dramatically. The Chinese government has increased censorship and assailed Western ideals in education. Meanwhile, university students in Hong Kong have staged mass protests to demand democratic elections. It is indisputable that China is in a state of transition.

I spoke with Dr. Hsiao-ting Lin of Stanford’s Hoover Institute to talk about China and its political future. Dr. Lin is a research fellow and curator of the East Asia Collection at the Hoover Institution. He received his PhD in Oriental studies from the University of Oxford and his academic interests focus on Chinese ethnopolitics, border strategies and defenses, US-Taiwan relations during the Cold War, and the political institutions of the Chinese National Party. Below is a lightly edited transcript of our conversation.

How would you describe Xi Jinping’s leadership style? Some compare his leadership to a return of Mao’s tactics and ideas; is this comparison accurate?

“Many people like to compare Xi Jinping to Mao Zedong thinking that both leaders are powerful and authoritative, and are able to control everything in China, but I don’t think this is a very accurate comparison. It is now the 21st century; I don’t think there is such an environment for China to produce a leader like Mao Zedong, not anymore. I would say that 21st century is different from China in the 60s and 70s when you had the cold war and the polarization of world politics. It allowed Mao Zedong to manipulate China’s internal and external surroundings to help him create this image of a supreme dictator of China. During this time, the government could blame things on the Americans or the imperialists and the people would truly believe this rhetoric. I don’t think it’s accurate to depict Xi Jinping like Mao Zedong, although he is more similar than his predecessors like Hu Jintao. I think he [Xi Jinping] is more in control, because of his background. His father used to be a very famous prominent leader in the Communist Party, so he had a very close relations with the military. This background helped him facilitate his consolidation of power within a relatively short time.”

Do you think the censorship and government control of the press has increased in the last few years? What evidence have you seen of this?

“Yes, not just in mass media, like the internet, newspapers, and magazines, but also in scholarly publications. I myself strongly feel that tendency in the past few years. For example, during Hu Jintao’s period [the previous leader of China] there was still relative freedom for scholars to publish whatever they thought as long as they have strong solid scholarly foundation. If you have solid evidence to prove that you are correct, you are able to publish it in academic journals. Not anymore – even if your research is based on solid evidence, it will often be censored. After Xi Jinping took power, all censorship in the mass media, on the Internet, and in scholarly publications has been tightened up. The government is cracking down on VPNs, software that enables people to access banned sites like Facebook, in an attempt to control the information that its people are exposed to.”

Why do you think the government has tightened its control on mass media and publications?

“There are two possible interpretations: one is that the government under Xi Jinping is more confident in themselves, so they think they are in the stronger position to control the people. However, people alternatively interpret that the new leadership is very insecure about their position. This is especially relevant at the moment when they are fighting with their enemies, like Bo Xilai, under the justification of the anti-corruption campaign. Everyone in China knows that officials are corrupt, more or less. So why is the Chinese government targeting those specific group of people? I would argue that Xi Jinping is trying to fight with his enemies under the guise of anti-corruption. It is still much more about power politics, not the pure anti-corruption movement.”

What is the significance of the calls from China’s minister of education Yuan Guiren to ban textbooks containing harmful Western values when a few years ago, he claimed there was nothing to fear from Western values? Will his efforts to limit Western information be successful?

“I think the government, no doubt about it, is tightening up its control over ideology. Such a move is ridiculous. There is no way to avoid that [teaching Western values]. Even Xi Jinping and other officials frequently talk about western ideas. How can you genuinely 100% distinguish western philosophy from the general common sense? It’s ridiculous. But we also have to be careful about this. There is a huge gap between political propaganda and the reality. So maybe the government officials announce this as a gesture of showing their confidence, but whether this kind of policy can really be implemented down to the college level is still doubtful. You cannot spy on each lecturer in a university to see what they talk about, what they teach. It’s more about propaganda, the government wants to be assertive.”

Would you say that the party’s approach is outdated? Are the Chinese people ready for more freedoms and will they be satisfied with the limits the government is placing on them?

“Because people in China are getting richer and richer, living conditions have improved. So people in China don’t want to be restrained anymore. They want to be more assertive and want to have their ideas expressed. The Chinese government wants the people to have a better life, no doubt of it. However, there’s a red line they don’t want the people to cross and that line is politics. That is the strategy that Beijing is applying: never cross that political boundary. People are smart, they know that the communist party will never tolerate these kind of political issues – Falun Gong, human rights, democracy – so people learn to be skillful on how to deal with the government. They protest, but never under the banner of anti-communism. They fight with the local government to win their rights but under the banner of anti-corruption, or something similar. I think the ordinary people understand that. They are skillful, they are smart.”

Do you think that people will start to cross this “red line”, or political boundary, naturally or there will there have to be a direct confrontation?

“I think in the long run, gradually over decades, when more and more of the Chinese enter the middle class, they will not be satisfied by the status quo and they will want to cross the boundary and win more democratic and political rights. This is in the long run; I don’t foresee it happening soon though. As long as the government can manage the economy well, people have work to do, there is a low employment rate and people are happy with their lives, I don’t think people will cross the political boundary soon.”

Where do you see the pro-democracy demonstrations in Hong Kong which started last year heading?

“Much like students here at Stanford protest over what they find unjust, college students are leading these protests in Hong Kong. Students are angry because the Chinese government is picking the candidates for the elections for Chief Executive, and not allowing true democracy. But behind this, there is a deeper psychological anxiety about a growing, stronger Chinese influence over a neighboring region or state. This is not just in Hong Kong. In Taiwan there is the Sunflower Movement, in which the younger generation is fighting the signing of an economic trade agreement with China. There’s a fear that closer economic ties across the Taiwan Strait will eventually lead to the political absorption of Taiwan into the greater China. If you look at the greater Asian region, I think every country – the Philippines, Vietnam, Japan – is fearful about a stronger, increasing Chinese influence in the region. Maybe the issues are different in each country, but innately the nature of these disputes are the same: how neighboring countries react to a growing Chinese influence.”

Do you think these countries’ worries are justified?

“I think they do have something to fear, but there is no way to stop a country like China from projecting its power externally, projecting its power to the rest of East Asia. I think everyone knows this reality. It’s just how you can cope with China without entering a larger conflict. You cannot avoid China from rising, but how do you deal with that without further military conflict?”

Hong Kong leader C.Y. Leung spoke to the public a few days ago: “Last year was no easy ride for Hong Kong…In the coming year, I hope that all people in Hong Kong will take inspiration from the sheep’s character and pull together in an accommodating manner to work for Hong Kong’s future.” Do people support the demonstrators’ actions or do they agree with Leung that they need to be more “mild and gentle”?

“Even in Hong Kong itself, there is split opinion: those against China’s policy and those who think China is being reasonable in handling this issue. In China itself, there are also people who sympathize with Hong Kong and people who think China should have a say in Hong Kong’s future leader. I have many friends from Hong Kong who emigrated here and their attitudes are always split. Hong Kong is such a tiny place where tourists and commercial activities are crucial to economic survival, and this protest movement has negatively affected Hong Kong’s tourist business.”

Thank you so much for speaking with me. I think people here at Stanford need to be more aware of current political trends in China which is why I am writing this article.

“I think everyone in this world should be very, very careful of China’s future. China is such a growing power; I don’t think people should ignore that.”