On October 29, White Plaza was a sight to see. Standing in the middle of the crowd, you could see people carrying pillows, mattresses, and signs migrating to White Plaza from all directions. The feeling of solemn solidarity radiated from victims of sexual assault and their allies. The rally at Stanford, called Carry The Weight, was part of a larger National Day of Action inspired by the experience of Emma Sulkowicz from Columbia University. Sulkowicz was allegedly raped in the beginning of her sophomore year by a student who was found not guilty by the University and still attends Columbia.

Since the verdict, which was appealed but not overturned, Sulkowicz, now a senior, has carried the mattress everywhere she goes. This powerful image has started a larger movement of victims and allies rallying to recognize the pain sexual assault survivors go through as well as to demand changes in policy on college campuses. At Stanford’s #CarryThatWeight National Day of Action, protesters appealed to students and administrators to think about and question the stereotypical characteristics of a sexual assault survivor.

Some of the policy demands, such as mandatory expulsion for students found guilty of sexual assault, raise important questions about equal protection for the rights of all students. However, the rally also called for more support groups and staff for those dealing with the consequences of feeling sexually assaulted. Perhaps the event’s most important goal was the overarching emotional appeal for empathy from the general population.

The program opened with Elisabeth Dee recognizing the crowd: “Survivors, I salute you. You’re brave, courageous. Allies, your presence is power.” One survivor chose to attend the rally to have her voice heard and encourage others to think about the power imbalance surrounding the sexual assault discussion. “The resources here,” she said, “are wildly inadequate, as a community and as an institution.” Dee called for additional resources for specific and often marginalized communities and for programs dealing with longer crisis management.

This last suggestion is arguably the most important one in terms of coping management and community empathy. While the SARA office offers immediate and short-term support to survivors, the long-term consequences of sexual assault do not receive specific staff attention. Regardless of whether or not an alleged perpetrator is found guilty, there are students on this campus that feel like they have been sexually assaulted and as a result, feel disempowered. Understanding how powerful the consequences can be even if the encounter is not deemed to be a sexual assault by the Alternative Review Process is integral to creating a culture of support and acceptance. Elliot Bomboy, one of the student presenters, extended the idea of supporting sexual assault victims regardless of how many degrees of separation there are between you and someone going through this experience. “To ignore [people dealing with these issues] even though they are not a part of our experiences, is just wrong.” 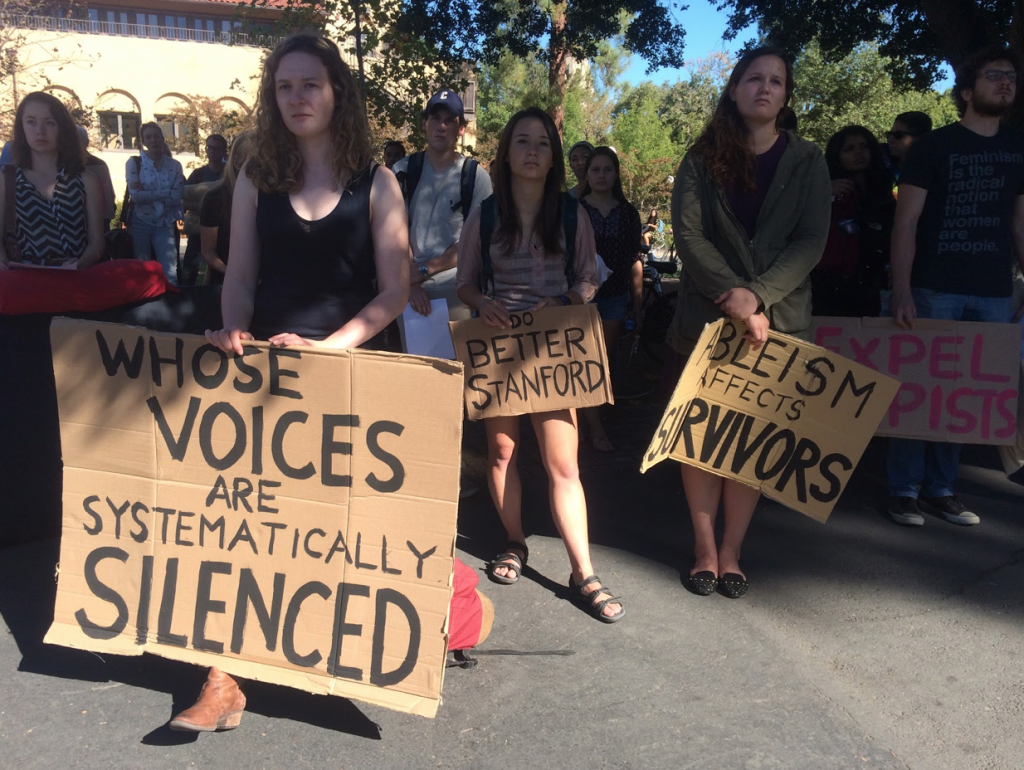 One presenter referred to the fundamental standard as a way to hold students accountable for being positive members of the Stanford Community. She emphasized mandatory expulsion, but stressed it as a solution to sexual assault cases resulting from violence or involving an unconscious party, acknowledging that this sanction is not necessarily applicable to the more ambiguous cases of sexual assault.

A group of black women passionately shared their burden of both sexual assault and racial discrimination, and another group of speakers asked for more diversity in the faculty. While the rally included some slight tangents on minority studies and racial representation in the faculty, the main focus of the event was the expression of solidarity and support for victims of sexual assault.

After the speakers, students carried mattresses down to the main quad together. It was an actualization of “Carrying The Weight” and students that dragged mattresses to White Plaza alone where able to share the weight with allies that had come to support them. The demonstration was therapeutic and empowering, allowing survivors to share their stories and feel united and understood. It brought attention to the issue in a visual way that members of the Stanford community that were previously alienated from the sexual assault discussion could understand, at least at an emotional level. Hopefully, after an event like this one, sexual assault survivors will feel like there are more hands to help carry the weight.