I once heard a story that went something like this: Barney Frank and Ethics walk into a bar. Ethics looks to his left, sees the congressman, and extends his hand. “I don’t think we’ve met before,” he says.

So imagine my surprise upon discovering that Stanford’s Ethics in Society honors program was launching its exciting Ethics in Democracy program on Monday night with a lecture from a congressman best known for his involvement in a prostitution scandal. Mr Frank was also reprimanded by the House for making misleading statements to a prosecutor on behalf of the prostitute (who he eventually hired), for letting him run a prostitution ring out of the Congressman’s home, and for fixing dozens of his parking tickets. Barney Frank is remembered for many things, but ethics is certainly not one of them.

Congressman Frank was also sexually involved with an executive from Fannie Mae, the government mortgage giant he was in charge of regulating and repeatedly defended as a member of the House Financial Services Committee. Moreover, there was a pre-recession past in which Congressman Frank memorably declared: “I do not want the same kind of safety and soundness” regarding regulation of Fannie Mae and Freddie Mac, preferring to “roll the dice a little bit.” Indeed, Frank opined in 2004, “I would like to get Fannie and Freddie more deeply in involved in helping low-income housing.” Fast forward to 2008 and who does Mr Frank blame for the recession? “Right-wing Republicans.” 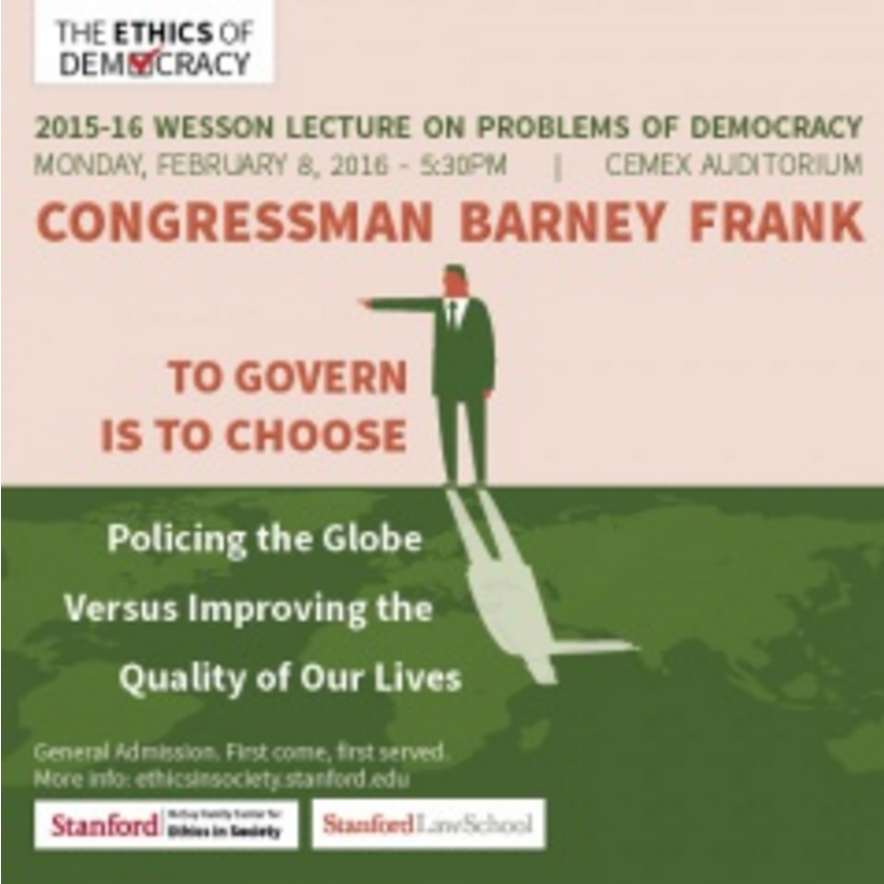 about ethics in democracy. There was the woman in line soliciting signatures for a petition. Prattling on, she lamented “I mean, someone has to expose the Koch Brothers.” I slowly understood what kind of event I was attending when the elderly man next to her responded, “Isn’t that what’s happening next time?” I checked my program, and sure enough, he was right. ‘Dark Money, the Weaponing of Philanthropy, and the Koch Brothers’ will come to Stanford on March 7th. But before I could fully appreciate the bravery of our Ethics in Society program in airing such a controversial anti-Koch brothers view, I was interrupted by more pressing thoughts – is ‘weaponing’ even a word? And what of the old ladies behind me, clucking “Oooh look, they’re bringing in Robert Reich in March!” and “Can you believe it? He’s being interviewed by a professor named Rob Reich – I’d come see it just for that.” You and me both, lady, you and me both.

The very title of of Mr Frank’s lecture, ‘To Govern is to Choose: Policing the Globe versus Improving the Quality of our own Lives’ was of course overwrought, assuming that policing the globe does not improve the quality of American lives. That is to say, it entirely prejudges the argument. Then there were the throwaway lines, including “There are a large number of people in this country who only care about protecting their unrestricted right to buy firearms and nothing else,” and “The single dumbest thing America ever did was invade Iraq.” Slavery, Jim Crow, and Japanese internment aside, I’m sure, but Mr Frank was on a roll. Worse were the lazy platitudes, like “Government is what we call it when we do things together” and the familiar warnings about neocons who “used 9/11.” Frank even laughably offered Henry Kissinger as an example of the “neoconservative obsession” with world order.

This shallowness characterized the former Congressman’s speech, and his thesis was no exception. Mr Frank argued that our democracy’s biggest problem is “excessive inequality” and a sense that Main Street bailed out Wall Street for a problem Wall Street caused. This, he continued, has given birth to a rational anger that is irrationally expressed at government in general, leading the people to support presidential candidates counter to their own interests. In response to this problem, Frank submitted that we needed to legalize drugs and cut military spending.

Tracking how Frank’s solutions were connected to inequality was difficult, but it appears his logic was that we cannot fight inequality directly since raising taxes is a political non-starter, so we should try to fight the negative effects of inequality with spending on health care, housing, and education. The problem is that we cannot afford this, so we need to cut military spending and legalize drugs. Then we’ll have the money for new programs that will mitigate inequality, making people less angry and more rational in their voting.

Let us take his argument seriously. Mr Frank posited that inequality was a problem because it denies people opportunities and because the lower marginal propensity to consume of the rich makes it economically inefficient. The first claim likely confuses inequality with poverty and lack of social mobility, and the second is controversial in economic circles. Even so, these claims could have formed the basis of a reasonable argument, but Frank never felt the need to elaborate.

Mr Frank correctly sees opportunities to cut defense spending, but fails to note that the US spends 3.3% of GDP on its military, which is less than it did in the 1960s, 1970s, 1980s, and 1990s, and a third of what we spent in 1957, relative to the size of the economy. It is not military spending that is breaking the bank but entitlement spending, which has skyrocketed from 3.9% of GDP in 1957 to 15.2% in 2015. This spending, of course, Frank has no plans to reduce. Moreover, we heard remarkably few details on his plans to fix health care, education or housing. Frank simply asserted that new government programs will cure people of their political irrationality, rather than dump money into the flaming pit of good intentions.

It is on foreign policy strategy, however, that Mr Frank was most interesting. He expressed unadulterated skepticism about the ability of the military to impose order on malfunctioning societies or replace authoritarian leaders with better alternatives. Accordingly, Frank advocated only intervening in defense of functioning nations that we can protect and then leave, like Kuwait in the Gulf War. This could have formed an interesting and perhaps more appropriately humble foreign policy, but it was contradicted almost immediately when Mr Frank praised the intervention in Yugoslavia and argued that we should have responded more strongly in Rwanda.

Clearly then, Frank would intervene in non-allied nations that are not functioning normally. So apart from reiterating that lack of democracy alone is not a valid reason to invade, striking down a strawman, he really just argued that we should only do those interventions that will work. Absent was any concerted or systematic attempt to grapple with the moral implications of military inaction, and Mr Frank flippantly dismissed the benefits of American-imposed world order as inadequate because “China needs trade routes open just as much as we do.” There was no response to the serious arguments put forward by scholars like Fred Kagan about America’s responsibility as a superpower to protect the liberal world order that secures freedom and prosperity for so many.

In sum, we saw no serious engagement on questions of inequality and interventionism, and a lazy thesis bundling all of Mr Frank’s favorite liberal policy proposals together in the hopes of forming a solution to an ill-defined problem.

And yet there were attractive parts to Barney Frank that came out from time to time. He touched on intelligent points when he exposed that Americans see the post-war anomaly of the US holding some 60% of global industrial output as normal, and that the crucial question of ‘compared to what?’ is forgotten all too often in political debates. Unfortunately, these points were squandered and dropped. Frank is also refreshingly open and funny. On Bernie Sanders: “If I thought you could be where he is ideologically, ethnically, and chronologically, I might run for President.” On Lindsay Graham: “I’ve never met a part of the world he would not invade.” With his mannerisms, his inability to figure out the projector, and his cell phone going off twice, Frank is an American character, to be sure.

However, I wonder why we had to bring in Barney Frank all the way from Boston to tell us that the solution to the problems of our democracy is liberal policy priorities, roughly sketched and poorly defined. Ask any undergraduate about America and you’ll get the same answer: the big problem is inequality, and can we also legalize drugs and stop invading foreign countries?
I am hoping that the rest of the Ethics in Democracy series will aim a little higher, but the early signs are not good. We can safely assume that Robert Reich (which one?) will take the same, now staid view of inequality as an existential threat, but at least we’ll get to rip on the Koch brothers. See you on March 7th!