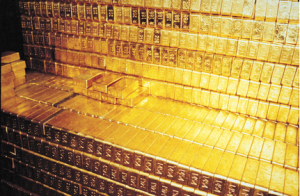 “You shall not crucify mankind upon a cross of gold!” With this declaration in 1896, Democratic candidate William Jennings Bryan electrified the nation and placed the controversy over the gold standard squarely in the middle of American politics. Although the United States formally adopted the gold standard when Bryan lost the election in 1900, his battle was far from lost. While it is tempting to see Bryan’s “Cross of Gold” speech as an interesting historical tidbit, the current examination of a return to the gold standard by the Republican Party shows this question is still important for today.

But what indeed are the costs and benefits of a gold standard? Are the Republicans wasting their time with dreams of a gold standard world that can never exist? While the Republicans have not adopted the gold standard as a policy position, it is illuminating that the debate over whether a gold standard would be beneficial for the financial state of the country is again making an appearance in Republic rhetoric. The last time a gold commission was convened was during the Reagan administration, in 1982. At that time there was high inflation, lending credence to the idea of using gold standard to add stability to the market. Even at that time, however, a majority of the participants in the commission opposed a return to the gold standard and the idea generally faded away.

However, the idea was resuscitated by Ron Paul and the libertarian movement in the past few years. Ron Paul, in an interview with CNBC, said that “[America] is deeply in debt and all that is being offered out of Washington is spend more money, borrow more money and print more money”. Thus Paul, along with a cadre of other Republican leaders, believe that the answer to massive government spending is a stable financial system, which they believe the gold standard would achieve.

While there are evident problems with the gold standard that have been raised by economists (most notably that it is virtually impossible in a globalized economy for only one country to be on the gold standard), the importance of the gold standard commission in the Republican platform is also symbolic. The Republican party knows that the state of the economy is the single most important issue for this economy. A diversified plan to attack those economic woes is therefore important, both to the campaign and to the voters who are still searching for a party to support. The gold standard may not be the most important aspect of the Republican plan to turn the economy around, but the willingness to examine different ideas shows that the party as a whole is serious about the country’s economic woes and, more importantly, is serious about finding ways to fix them.

*Elle Stuart is Deputy Editor of Opinions at the Stanford Review. She can be reached at emstuart@stanford.edu. *