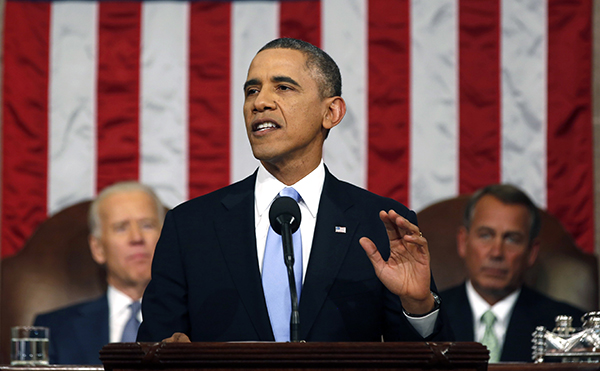 A few hours ago, I walked into a room and sat down next to some friends, snacks in hand of course. A group of young college students huddled around a television to watch you fulfill an obligation that has existed for over two hundred years. By Constitutional law, the highest in the land, the President “shall from time to time give to the Congress Information of the State of the Union, and recommend to their Consideration such Measures as he shall judge necessary and expedient.” When I pause to think about you addressing Congress, I find it truly amazing that a document created almost *two centuries *ago is still universally accepted as the supreme law of this country. That is, until tonight. That is, until I heard you exclaim how “I intend to keep trying, with or without Congress” to impose new gun control regulations. That is, until I heard you explain how you unilaterally raised the minimum wage for workers at federal contractors to $10.10 an hour. That is, until I heard you say that “wherever and whenever I can take steps without legislation to expand opportunity for more American families, that’s what I’m going to do.” This mindset, especially when projected to such a wide audience, has dangerous repercussions for our country and, in the following few paragraphs, I plan to raise some concerns I had with your speech. In fact, I have a Constitutional right to do so. A right that I am entitled to by this country’s highest law.

To be fair, I know that you did not attack the Constitution explicitly in your speech. You acknowledged there will be times when Congressional action is required to achieve your policy objectives. It was important for you to explain how some of your aims will “require congressional action.” However, these laudable statements do not negate the cavalier attitude you displayed elsewhere toward the Constitutional system. Our political system, as I am sure you know, was founded on the belief that governance via a set of unflinching rules is the best guarantor of individual liberty and prosperity. Unlike many other conservatives, I do not feel that government should be viewed only in terms of what it cannot do. Although the Founders were rightly focused on limiting government power, it is important to understand that, in some ways, they saw the Constitution as a mechanism to empower a government to act. I recognize that the relative weakness of the government established by the Articles of Confederation was a major impetus for the Constitution’s inception. Nevertheless, the Constitution compels the government to act, even in a positive sense, in accordance with a clear set of rules and tonight, you claimed that you would skirt this system whenever possible. Please do not simply take my word that a President vowing to act without Congressional support is big news. I am by no means a professional journalist, but in this case, I can easily find some places that back me up. CNN, MSNBC, and The New York Times all have articles on the front pages of their website, the headlines proclaiming your desire to act outside of Congress.

Mr. President, it does not matter how obstructionist Congress may be. By law, you cannot legislate without them. Constitutional order cannot be sacrificed for political expediency, even when the policy in question may be a desirable one (I am also aware that both Democratic and Republican Presidents have acted beyond their Constitutional authority. If a Republican President said similar things to you, I would be saying the same thing.) I hope you consider how damaging it is for a President of the United States addressing the nation in Congress for a constitutionally mandated event to suggest that the Constitution is something that can and should simply be discarded whenever possible. I know you are a role model for many people and hearing you disparage America’s supreme law is very disturbing, especially because many of those who look up to you may now think it appropriate to act outside established laws. Many of those who see you as a role model (and I must confess, I do too) are members of my generation. America’s youth. You frequently mentioned creating opportunities for future generations and, as one of these future generations, I feel it is appropriate to examine these opportunities.

When discussing our nation’s youth, you threw back (to use our generation’s lingo) to the beginning of your Presidency and explained how “Five years ago we set out to change the odds for all our kids.” Mr. President, you succeeded, but not in the way you, or any of us hoped. Since the beginning of your Presidency, the national debt has increased from roughly $11,000,000,000,000 to over $17,000,000,000,000. The average debt per citizen, including interest, is $591,585. As the Federal Reserve begins to reduce its bond-buying program, interest rates on U.S. Treasury Bonds will increase, enlarging our total debt burden. This is not sustainable in the long term. Our generation’s policy choices will be severely limited in large part because of the debt incurred during your administration (and the one prior to yours). Near the end of your speech, you proclaimed how the “America we want for our kids” is a place “where prosperity is widely shared and opportunity for all lets us go as far as our dreams and toil will take us.” Mr. President, prosperity will neither be widely shared nor existent if we are burdened by a crushing federal debt. You mentioned during your speech how the deficit has fallen; yet this claim conceals an important fact. The deficit rose during the past few years both because of the economic downturn and because of your large expansion of government spending. It is no wonder that the deficit has fallen; the economy has begun to recover and the debt is naturally growing at a slower rate. However, we must ask ourselves whether the deficit would be even lower without your massive expansion of government. Furthermore, since the CBO reports cost and revenue projections over a ten-year period, many of your programs, such as the Affordable Care Act, will increase in cost as the revenue collection years where costs were low and programs not fully formed are largely behind us. Both parties are responsible for this massive debt burden and, instead of expanding future generations’ options, you have constrained them. I am aware your discussion of opportunities was not limited to my generation and it is to these other discussions that I now turn.

During the State of the Union, you advocated for some policies that you feel would increase opportunities for all Americans. Specifically, you talked to us about homeownership, calling for a bill that helps keep “the dream of homeownership alive for future generations.” This is an admirable goal, but it can have serious unintended consequences. Just look at the most recent recession. Wall Street has received large amounts of blame but Mr. President, government policy was far more responsible for the collapse of the housing market than any private-sector entity. I do not wish to dive into technical economic matters, but one point is worth mentioning briefly, especially due to your subtle attack on Wall Street during the speech. The government passed many laws, such as the Community Reinvestment Act in 1977, that encouraged banks to relax lending standards for certain segments of the population, such as those with less than stellar credit histories. This increased risk in the housing market, and coupled with moral hazard due to expectations of bailouts, helped precipitate the housing bubble (along with abnormally low interest rates from the Federal Reserve). The point: government programs such as efforts to expand homeownership or college education via student loans have serious side effects that may severely harm the economy and as our President, you owe it to the public to be upfront about these risks. To do otherwise is to invite another economic calamity that significantly narrows opportunities for Americans.

I could address more parts of your speech, such as the minimum wage, but I feel others can more effectively address policy questions elsewhere. You emphasized creating opportunities and prosperity for future generations, but many of the policies you have enacted or wish to enact will do the opposite. The best way for government to expand prosperity is for government to abstain from trying to expand prosperity. Although I agreed with some of your positions, such as avoiding a permanent war footing for this country, many of your other proposals raise some serious concerns. Near the end of your address, you told us your view of what citizenship means. I would like to tell you mine.

As you said, citizenship means protecting individual voters’ rights. You stated: “It should be the power of our vote, not the size of our bank account, that drives our democracy.” I agree with you, yet your own policies seem not to. Existing spending on senior citizens far outstrips spending on youth. Medicare, Medicaid, Social Security, and Pensions are by far the largest components of the federal budget and debt. Senior citizens have the large lobbying organizations with hefty bank accounts to lobby for them; my generation does not. Due to increasing debt and the impending Baby Boomer retirement, my generation will be forced to subsidize current and imminent retirees at increasing rates, decreasing our standard of living. Citizenship means protecting the welfare of all generations, not just one.

Citizenship demands that we live by the laws of our land. Mr. President, you swore an oath to preserve, protect, and defend the Constitution. Your comments about bypassing Congress were dangerous and set a negative precedent. America’s highest law should not be treated in such a light manner.

Citizenship means embracing personal responsibility and the risks that come with liberty. By championing government as the solution to many of America’s problems, you erode the fundamental tenets of a free society.

Citizenship demands that I write this letter.