A new class of violent thugs prowls our streets. Donning black clothes, masks and red bandanas, the so-called Anti-Fascist movement, or “antifa,” issues threats and commits acts of violence, intimidation, and vandalism against those it brands as “fascists.” The group represents one of the most extreme elements in the intensifying political turmoil of the past few years.

Fringe figures, such as white nationalists, are by no means the only target’s of antifa’s violence. At college campuses across the country, antifa has disrupted lectures by mainstream conservatives and libertarians, often brutally assaulting event organizers and attendees. At UC Berkeley, in February, 2017, antifa caused $100,000 in damages in an attempt to derail a scheduled appearance by Milo Yiannopoulos, violently punching, kicking, beating, and pepper spraying Trump supporters. At the University of Utah, antifa operatives stockpiled firearms and viciously attacked attendees of Ben Shapiro’s campus lecture. The Department of Homeland Security and FBI have designated these actions by antifa as “domestic terrorist violence.” Like other recognized terrorist organizations, antifa is a non-state entity that employs violence against civilians to advance a political agenda. 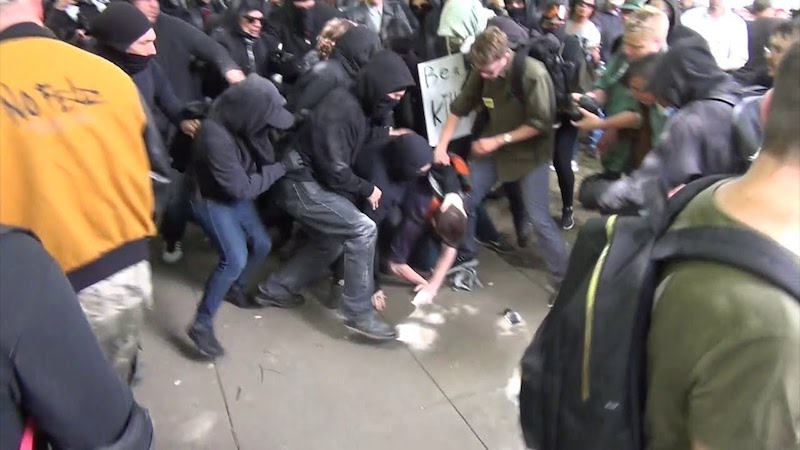 And yet, an antifa ring-leader, David Palumbo-Liu, holds court on Stanford’s campus. Palumbo-Liu, a professor of Comparative Literature, is certainly no stranger to controversy, as he is one of the most prodigious anti-Israel academics in the country. Palumbo-Liu is a staunch advocate of the Boycott, Divest, Sanction (BDS) movement against Israel and has praised the website “If Americans Knew,” a site extensively associated with Holocaust deniers and white supremacists.

While many students understandably take offense at Palumbo-Liu’s extreme views, he certainly has every right to promote his ideas in the classroom. However, Palumbo-Liu recently took his extremism beyond the realm of ideas. In August 2017, Palumbo-Liu, along with Purdue University professor, Bill Mullen, founded the Campus Antifascist Network (CAN). The group was founded to serve as “a big tent” for “anyone committed to fighting fascism.”

Palumbo-Liu and Mullen can mince words all they want: their organization is undeniably a chapter of a terrorist group, championing the same kinds of violent resistance that have muzzled free speech across the country. CAN aims "to build large, unified demonstrations against fascists on campuses when they come." According to Mullen, CAN’s purpose is to "to drive racists off campuses." Given the paucity of self-proclaimed "fascists" on college campuses, antifa has decided to designate anybody with whom they disagree -- namely, Trump supporters and conservative speakers -- as would-be totalitarians. Thus, this group's objective is not a noble fight against fascism and tyranny, but rather, the violent intimidation and forcible silencing of right-leaning students and faculty. On campuses across the nation, antifa has targeted, physically intimidated, and assaulted College Republican activists. All in the name of tolerance!

Do we really want to bring this type of vigilante thuggery to Stanford by enabling a professor who promotes it? Palumbo-Liu’s Facebook page is filled with antifa propaganda. He has posted a number of photographs on his page from an August 27 incident at Berkeley, during which masked antifa brutally assaulted attendees of a peaceful pro-Trump rally. Palumbo-Liu has a history of encouraging violent and militant leftist tactics, including by his own students. In 2015, Palumbo-Liu congratulated several of his students for taking part in an anti-Israel protest that caused car crashes and blocked traffic on the San Mateo Bridge for an hour, allegedly preventing a 3-year-old child in medical distress from reaching the hospital. Apparently, inconveniencing and injuring people on their commute is how Palumbo-Liu and his anarcho-leftist pupils intend to win hearts and minds. 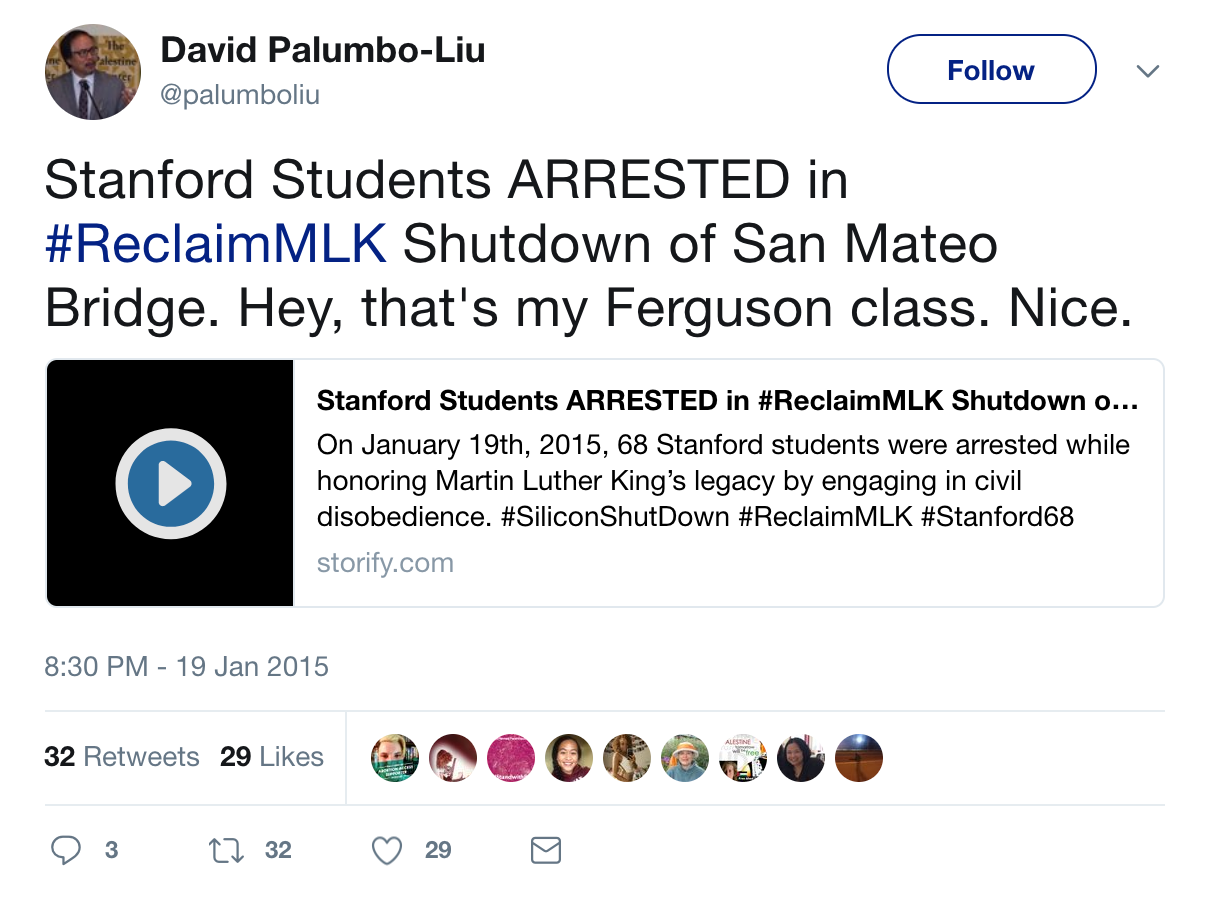 Moreover, given Palumbo-Liu’s extensive connections to the most extreme elements of the anti-Israel movement, is it unreasonable to assume that pro-Israel students will soon be on the receiving end of antifa’s violent outbursts? Antifa’s intent to intimidate pro-Israel students is in plain sight: on the anti-Israel hate-site “Electronic Intifada,” Bill Mullen, who worked closely with Palumbo-Liu to co-found CAN, wrote “we need to de-Zionize our campuses.” William Jacobson, Director of the Securities Law Clinic at Cornell Law School, has been tracking the BDS movement for years. In Jacobson’s words, “The teaming of the BDS and Antifa movements is the single most dangerous development I have witnessed in the many years I have been covering campus BDS. Antifa will give BDS even more muscle to intimidate and threaten those who oppose the BDS agenda.”

The antifa movement is a violent domestic terrorist movement. Contrary to popular usage, there has not been a true re-emergence of “fascism” in America. The fascists in Nazi Germany and Mussolini’s Italy wanted to “kill democracy and establish a dictatorship,”, a mission which clearly has nothing to do with the Trump agenda. While there has arguably been a resurgence in hate groups in America, using the label “fascists” to describe Trump supporters is a shamefully dishonest excuse for antifa members to commit appalling acts of political violence against the right at large. Antifa thugs who use domestic terrorist tactics to silence their political opposition act uncannily like the Brownshirts 80 years before them.

Palumbo-Liu claims that the organization only supports violence in self-defense for those being threatened by fascists. Are Stanford students really being endangered by bigots? When was the last time a hate crime took place on campus? Though Stanford has seen hate-driven vandalism, why should antifa replace the rule of law in investigating such acts? Or perhaps Palumbo-Liu simply views speech he disagrees with as a form of violence that must be countered with actual violence. Moreover, Palumbo-Liu’s definition of “fascist” is remarkably broad. He provided us a hazy definition of fascism by Shane Burley: “inequality through mythological and essentialized identity” and augmented this definition with “elements of what might be called ‘classical’ fascism,” including “structural phenomena like the convergence of powerful state and business interests that consolidate power away from citizens and into special interests” which concentrate wealth in the hands of the few.

But this definition is incredibly broad and seems to encompass most progressive causes. According to the rest of the antifa movement, popular conservative commentator Ben Shapiro counts as a “fascist.” Does a speech by him constitute an “act of violence” against which “self-defense” is justified? If antifa are to claim such a right, they need to clearly define “fascist,” not excuse this question by claiming that “we need to pay attention to what is happening, not the labels that we feel are most fitting” as Palumbo-Liu claimed in a Campus Reform interview. Labeling a person or idea as “fascist” without taking the responsibility to carefully and narrowly define the term is dangerous. When we asked Palumbo-Liu what fascist activities required self-defense, he pointed to the online activities of alt-right members like doxxing and harassment. However, if an end to doxxing - a reasonable cause to campaign for - is truly the goal, why not start a “Campus Anti-Doxxing Network”? Why instead associate with a group representing physical violence?

When we asked Palumbo-Liu whether he endorsed violence in the name of anti-fascism, he said, “damaging buildings and attacking people physically...is not what we advocate.” However, violence has always been a crucial tactic of the antifa movement: the American public commonly associates the anti-fascist movement with club-wielding attackers dressed in black. While the tactics of the “Campus Antifa Network” may not be violent, why would it claim the name of a known violent organization? It is a stain on the reputation of Stanford University that a professor like Palumbo-Liu is a leader in a movement whose spirit and tactics usually represent the opposite of what universities should exemplify: the civil exchange of ideas.

Instead, conservative students know that he affiliates himself with a network of people who believe themselves justified in violently silencing their opposition. There is no way to reconcile David Palumbo-Liu's position as a professor teaching students with his status as the campus representative of an ideology known for inspiring savage assaults of students holding opposing political opinions. David Palumbo-Liu has every right to express his views in the classroom, and opposing racism is certainly a worthy cause. However, assuming a leadership position in a movement whose activities have been classified as domestic terrorism by the DHS and FBI is utterly intolerable. David Palumbo-Liu should condemn and dissociate from the Campus Antifa Network immediately, or else resign as a professor at Stanford University.