“Everyone says, ‘Oh, the poor American people. Look at how badly they’re represented,’” began stalwart liberal and former Congressman Barney Frank in his introductory remarks. “Well, who the hell elected them? If they’re going to go looking for someone to be mad at, they should include themselves.”

And so began Tuesday’s event: Gridlock: Is There a Future for Bipartisanship? Indeed, the panel’s composition all but guaranteed an interesting evening. Appropriately placed to the right of Mr Frank sat the politically nebulous former Congressman Mickey Edwards, who made it a point to demonstrate just how much he “hate[d] both parties.” Former Representative and 1998 GOP California gubernatorial candidate Dan Lungren completed the ensemble. 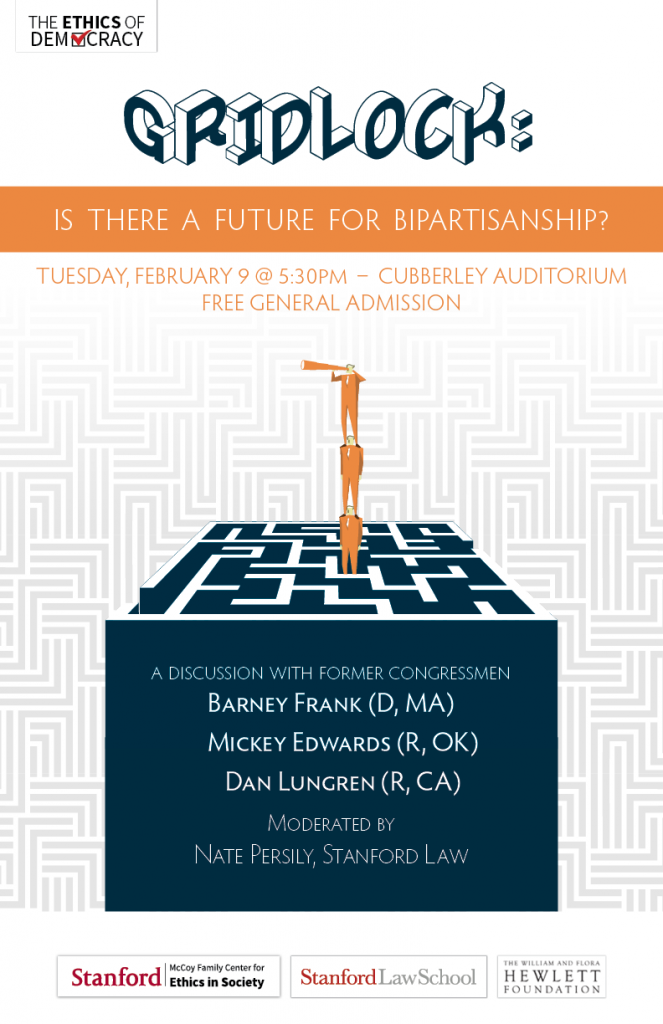 The second in Stanford’s Ethics in Democracy series, the event highlighted the panelists’ general thoughts on polarization as moderated by Stanford law professor and political scientist, Nate Persily. As the speakers gave their opening pitches, they outlined the various reasons why they believe the current Congress to be dysfunctional. That each speaker disagreed on what the stumbling block for compromise was readily attested to the difficulty of reaching consensus in Washington.

Mickey Edwards argued that polarization was due in large part to the tight control the Republican and Democratic parties have on the electoral process. He was especially adamant that it was the ‘extremists’ who vote in primary elections that create the gridlock in Washington. Citing the 2012 Ted Cruz-David Dewhurst Senate Republican primary battle in Texas as an example, Mr Edwards elaborated on so-called ‘sore-loser laws,’ which prevent candidates who have lost a primary battle from competing in the general election. As a result, Edwards noted bitterly, Senator Ted Cruz was elected by just two percent of the Texas population.

Mr Frank was not buying it. “It is the people who don’t vote in primaries who are the ones to blame. Ideologues did not stop moderates in the Republican primary from voting for Dewhurst over Ted Cruz.”

Meanwhile Dan Lungren seemed less concerned about the problem of polarization in general, noting that the Constitution specifically designed government to be difficult to manage in order to protect civil liberties. Still, he cited politicians’ fundraising obligations and reluctance to move to Washington, D.C. as less visible barriers to effective governance.

Several times during the course of the discussion the three ex-politicians raised their voices and began talking over one another in an attempt to set the record straight. The most contested moment of the night featured the panelists arguing over which party had been most unreasonable in cooperating with a president from the opposing side. Often, it felt as if the guest speakers were living in the very “parallel media universes” Mr Frank had previously blamed for people “literally getting different information.”

The irony was not lost on audience members, and lines began to form on either side of the Cubberley stage almost as soon as Mr Persily announced the start of the Question and Answer portion.

“I haven’t learned anything tonight,” one elderly gentleman complained into the microphone. “Because you all are sitting around shouting and pointing fingers at each other.”

“I want to hear solutions,” intoned another.

The guests all took a certain amount of umbrage at these questions. Mr Edwards polled the audience to determine how many people had known about sore-loser laws before the night’s event. Mr Lungren maintained that the panelists were having a “vigorous debate,” and if that offended anyone, he was sorry.

One student asked whether institutional factors such as mass incarceration or poverty played a role in depressing voter turnout. But Mr Frank refused to exonerate non-voters, encouraging the questioner to not go around making excuses for those who feel their vote cannot make a difference. “Unhappiness with public policy is not a reason not to vote,” Mr Frank insisted.

The guest speakers did appear to be united in their rejection of the notion that there might be too much cooperation in Congress. When one attendee questioned why bipartisanship was being presented as a kind of inherent good, given the bipartisan consensus in favor of hawkish Cold War tactics, segregation, and Keynesian economic policies for the greater part of the 20th Century, the speakers shrugged the list off as “bad bipartisanship.”

When asked about the bipartisanship that currently funds foreign wars, bank bailouts, and deficit spending, Mr Frank countered whether the questioner thought issues such as LGBT rights and the Affordable Care Act would have been treated the same had John McCain won the 2008 presidential election. “It’s a grave mistake to say that because you don’t think there’s a big enough difference between the parties it means there isn’t a difference.”

“If I didn’t think it made a difference who was in office, I wouldn’t have run,” Mr Lungren agreed.