Last month, a famous academic paper produced by Harvard economists Carmen Reinhart and Kenneth Rogoff was revealed to have a consequential Excel error, when graduate student Thomas Herndon,and his professors Michael Ash, and Robert Pollin of the University of Massachusetts Amherst, could not replicate the results of the Reinhart-Rogoff paper.  Entitled “Growth in a Time of Debt,” the paper is particularly famous for revealing that debt-to-GDP ratios exceeding 90 percent are associated with *negative *economic growth.  Consequentially, many politicians have cited the study as evidence in favor of larger spending cuts and the slower expansion of entitlement programs, a controversial political stance termed the “austerity agenda” by the political left. 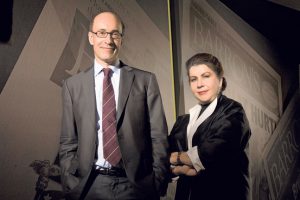 When adjusting for the error in which Reinhart and Rogoff forgot to drag down their formula five more cells, Herndon, Ash, and Pollin found that the famous 90 percent debt threshold ceases to be correlated with negative economic growth.  However, growth does slow down to a meager 0.1%.  And when including data from Australia, Austria, Belgium, Canada, and Denmark, economic growth at a 90 percent debt threshold increases to 2.2%.  This, however, is still about a percentage lower than the growth rates of countries with more moderate debt burdens.  Compounded over time, such slight differences in *annual *economic growth could be quite substantial in the long-run. (For example, this has roughly been the difference between the growth rates of the U.S. and certain western European welfare states in recent decades, a difference—though meager—that has nevertheless contributed to an approximately 30+% higher per capita incomes in the U.S.)

The resultant media frenzy was nevertheless far from minimal, with many liberals citing the mistake as evidence of the broader weakness of fiscal conservatism. *The Atlantic’*s Matthew O’Brien, for example,**describes the error as “the academic’s version of the dream where you’re naked in public…except it’s not a dream.”  And Mark Gongloff of The Huffington Post claims that “there’s no better proof that the intellectual case for austerity has always been empty.”

Much of the journalistic commentary on the debacle, however, seems to be void of more nuanced and sophisticated economic reasoning.  To fill this void, the Review sat down with Dr. Michael Boskin, senior fellow at the Hoover Institution and former chairman of the President’s Council of Economic Advisors.

Boskin emphasized that errors indeed occur within the academic community with more frequency than one would think, citing several examples of prominent economists—including himself (in an early draft), Harvard professor Gregory Mankiw, and even Nobel laureate Kenneth Arrow—as individuals who have indeed made errors in their own studies.

“These things happen,” he commented. “In this case it was particularly awkward because it had become a widely cited example of a much larger body of research by many people.  So people from the other side of the argument who want to push forward with increases in the deficit seized onto it and wanted to discredit the whole thing,” he explained.

Boskin continued to say that such political backlash was “ridiculous, but perhaps not unexpected,” given the relevance of the paper’s results for debates over fiscal policy in the U.S. and Europe.

He emphasized, “Nobody should be foolish enough to come to a conclusion on any subject in economics basing it on just one study, even if it’s your own study.”

Equally important to note, however, is that nowhere in the Reinhart and Rogoff paper do the authors mention that high ratios of debt-to-GDP—especially the controversial 90 percent threshold—*cause *slow growth.  In fact, they explicitly mention that the 90 percent number required “further sensitivity analysis,” when applied to the four broad debt groupings in their data.  The paper in particular mentions that “debt thresholds are importantly country-specific.”

Boskin echoed this subtle yet significant caveat, “I’ve been a little suspicious that there’s a magical debt threshold.  If we applied the threshold to any country, it may or may not fit the exact circumstance of the case.”

Whether or not such a debt threshold—more popularly known as a “tipping point”—exists, the argument in favor of more controlled government spending still stands, Boskin argued.

The basic economic intuition behind this argument is as follows: without more controlled entitlement spending, particularly with regards to Social Security and Medicare in the U.S., future taxes will have to be paid on the debt resulting from the deficit.  This may not occur in the near future, but eventually this debt—and the higher interest accrued on this debt—will have to be paid, translating into higher taxes paid by future generations. Higher taxes would also likely crowd out private investment, potentially resulting in lower future incomes.

“When you accumulate the effect of high debt ratios, it adds up to a big decrease in standards of living.  So for you and all the Review readers, if we don’t get our projected debt under control, in the not-too-distant future, you’re going to have less income and pay higher taxes than you should,” Boskin emphasized.

He further argued that the term “austerity agenda,” is particularly misleading.

“That’s a bad name because a version of that would be good for the economy.  And that would be a phased-in, gradual reduction in the growth of spending.  I don’t think it would be austere at all, and I think some types of big additional stimulus would do very little in the short-run and would be very austere to your generation,” he said.

Thus, the Reinhart-Rogoff Excel error remains just that, an error.  Whether it will impact the eventual resolution of the highly contentious debates over fiscal policy in a slowly recovering global economy is highly unlikely.  Whether it will remain the target of media professionals from the political left, however, remains to be seen.