While the chants of “We are the 99%” only echoed in Zuccotti Park for a few brief months in 2011, Americans are still outraged at the pervasive income inequality that inspired the protests. And while many find the aggressively progressive culture that permeated these protests extreme, there is an undeniable and dangerous wealth disparity in this country. Income inequality is a problem, and perhaps even more concerning, it is a relatively unique problem for a developed country. Statistically, the US is themost unequal developed economy. The GINI index, which has tracked inequality since the 1950s, shows trends in this index. 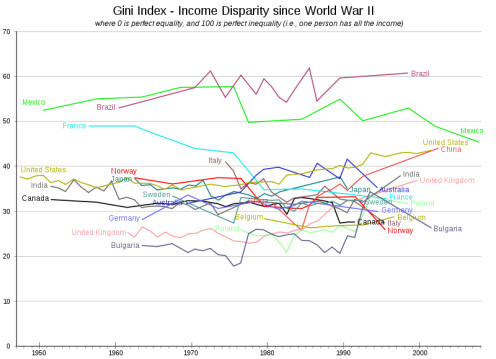 American income inequality is astounding, with a Gini coefficient of 45. For comparison, we are nearly tied with China and have far more inequality than countries like the UK, India, Estonia, and Bulgaria. As indicated by the above chart, America’s Gini coefficient actually declined from the 50s to the 80s, but following the 80s recession it has grown precipitously.

Although recent outrage is founded in legitimate issues, the solutions proffered by the protestors in Zuccotti Park suggested that one of the biggest causes of income inequality, the Federal Reserve’s recent monetary policy, is neither well known nor well understood. Before we can discuss the Federal Reserve, it is important to paint an accurate picture of income inequality in the United States. Wealth accumulation by the 1%, while still substantial, has been much more modest than some would expect. Growth in the nation’s top income bracket has been driven by 0.01%.  While the 1% may have been targeted simply because “We are the 99.99%” is a not particularly catchy slogan, the fact remains that the image painted by the Occupy protesters obfuscated the actual picture of inequality in this country.

The top 1% is barely visible diverging from the bottom 99%.  Astronomical real income growth has only occurred in the top 1/1000 of American households.

By looking at income inequality with more detail, it becomes apparent that while the 1% is certainly growing rapidly, the major force behind that growth is the astronomical acceleration of earnings in the top 0.01%. As we can see above, the highest growth achieved by the one percenters was a four-fold increase on 1980s earnings. Compare that to the over eightfold increase in the top 0.01%’s earnings. Inequality is not the separation of doctors, lawyers, or professionals from the working class, but it is the enormous financial gains made by the ultra wealthy. So who are these ultra wealthy? Within the 0.01% of American society there are some lawyers (7%), doctors (6%), and real estate moguls (4%) but incredibly 61% of these ultra wealthy individuals are in the finance industry. It seems Wall Street is driving the growth of inequality in the United States, but it is essential to understand what forces allow Wall Street to drive income inequality.

The Occupy protesters seemed to at least have some sense of Wall Street’s role, but they missed a fundamental connection. The Great Divergence (as the growth of inequality in the US has been called) correlates with a period of easy monetary policy. Consider the following scenario: the Federal Reserve, concerned about slow economic growth and scarce liquidity, drops the overnight interest rate (the interest rate at which the Federal Reserve lends money to private banks) from 2% to 0.5%. Financial institutions that were lending to consumers at 2.5% lower their commercial rate to 1.0%. The markup remains the same, but the volume skyrockets—that’s the whole point of lowering the discount rate. By reducing the cost of money, the Fed can pump cash into the general economy. The financial world acts as the gateway from public to private and they scrape their percentage off. So easy money, while priming the general economy, first and foremost primes the finance economy. The effect runs deeper than just adding half a percentage of interest and passing the money along. A deep discount in the overnight lending rate allows banks to invest more borrowed money directly. With cheap money, banks can build large portfolios that can often bring high returns. Since these portfolios can be up to 97% borrowed money, the cheaper it is to borrow money the more profit these portfolios can make. It is no great mystery that 24 years of easy money grew the incomes of the wealthiest financiers and thus drove the divergence in income.

This is not a hypothetical scenario; long term data supports the assertion that easy monetary policy primes the finance industry and correlates with income disparity. Much of the growth in income disparity has occurred post 1990, this rapid growth is apparent in the figure above. The average federal funds rate (the rate at which the federal government lends money to financial institutions) was 6.43% from 1952 to 1990. From 1990 to present day, the average rate was nearly half that, only 3.39%. Lower rates may have been necessary to stave off potential contagion from the Asian Financial Crises, soften the blow of the Tech Bubble’s bursting, and attempt to buoy the free falling economy in ’08. But the mechanism by which the Fed stabilizes the economy inherently exacerbates income inequality.

Circling back to those cold, rainy days in Manhattan, the Occupy movement raises important questions: if easy money drives income inequality, what is the solution to bring American income disparity into line? I believe we should approach the issue after establishing a set of fundamental governing rules.

For one, any attempt to level income equality should focus on raising the lower income brackets higher. If equality is achieved through a “race to the bottom” dynamic then everyone suffers. Equality should not be pursued simply for its own sake—stratification can help to provide incentive for innovation and hard work. But certainly the spread of incomes should be smaller and the average income higher.

Secondly, we must not turn only to the government for solutions. Indeed the Fed’s easy money policy has exacerbated the problem; while low rates may have been necessary during specific crisis, government intervention comes with unintended consequences.  In this case Fed actions have lead to a larger spread in income disparity.The idea that higher tax revenue and subsequent higher social spending could somehow be effectively used narrow the gap is also problematic. Keynesian type government spending can be a very effective life raft in a recession, but state capitalism and command economies have been largely unsuccessful and can increase market inefficiencies.

Moving to tackle inequality should involve first and foremost an acknowledgement of quantitative easing’s exacerbating effects. After that, a solution can be crafted that grows the middle class without diminishing the upper percentages of American society.