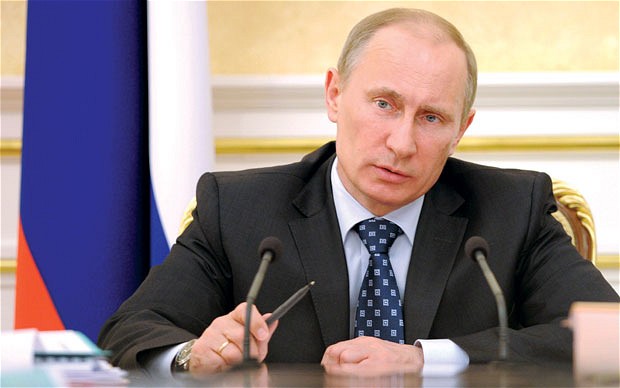 For Americans, recent events in Ukraine have redefined how we view Russia’s place in the world.

Russia seems to us a pragmatic aggressor, the geopolitical manifestation of a bare-chested Putin hunting and subduing wild bears (except the bears are former Soviet states).

Russia is a velikaya derzhava, a Great Power—so it would like to think. This simple yet commanding identity has long defined Russian politics, foreign policy and decision-making.

For Russia, a Great Power is a principal protector of international order comparable to the United States that is uninhibited to pursue its national interests.

Whereas some countries like the U.S. would think twice before publicly acknowledging aspirations of their own Great Power status, Russia states it with little ambiguity in its Foreign Policy Concept of 2000:

“[Russia seeks to] achieve firm and prestigious positions in the world community, most fully consistent with the interests of the Russian Federation as a great power, as one of the most influential centers of the modem world.”

Within this context, Russia’s recent actions make sense. The occupation of Crimea, for example, intends to ensure the Kremlin’s influence in Ukraine and deter Kiev from closer ties with the EU. Similarly, the Georgian War of 2008 nicely fits the paradigm of Russia exerting power in its local sphere of influence, or what it calls its Near Abroad, as it believes every Great Power has the right to do.

Although the Great Power lens explains many of Russia’s recent actions, the West tends to craft a different and less useful narrative of Russian activity. This linear perspective depicts Russia and the world as either progressing “forward” toward liberal democracy, or regressing “backward” toward authoritarianism.

From this perspective, Gorbachev’s policies of Glasnost and Perestroika that facilitated the fall of the USSR were movements forward, as were Yeltsin’s public approval of liberal democracy and Putin’s cooperation with the U.S. at the onset of the War on Terror. Yeltsin’s opposition to NATO in Kosovo and Putin’s power politics in Eastern Europe were backward movements in this linear system.

This linear narrative has negatively affected America’s foreign policy outcomes with respect to Russia. Many viewed the Cold War’s end as an inevitable result of Moscow’s longstanding fight against capitalism. Thus, when the USSR dissolved, the U.S. saw little need to substantially aid Russia’s march toward democracy. American leaders believed that Russia would naturally evolve toward a democratic government independent of financial assistance from the United States. In other words, some believed that democracy was the inevitable after the fall of Communism, so why throw money at Russia?

Perhaps President Obama and Ambassador Michael McFaul’s “Russia Reset” program was also designed in the spirit of natural democratic evolution. The Reset sought to engender the conditions necessary for domestic change in Russia by creating a benign external environment and capitalizing on shared interests such as nuclear arms reduction. The implicit assumption of this strategy is that, given the right conditions, Russia would naturally move toward liberal democracy and a more useful partnership with the West.

History suggests that analyzing Russian contemporary foreign policy with the Great Power hypothesis makes for more realistic expectations of Russia than does the linear liberalization narrative.

Gorbachev’s reforms, for example, were attempts to strengthen a weakened Russian economy and state by lessening the need to compete with the American industrial machine. Likewise, Yeltsin’s embrace of democracy was an attempt to attract international investment as a means of reestablishing Russian power. Finally, Putin’s cooperation with the Bush Administration on counterterrorism was a way of strengthening the state by deflating the terrorist threat in Chechnya.

These distinct examples of cooperation were not examples of changing Russian strategy. Instead, these examples reflect Russia’s consistent strategy of regaining its position as a Great Power. Thus, as the Russian economy strengthened due to higher gas prices and its state seemed more secure, Putin’s rebuke of the West does not seem so irrational, at least in retrospect.

The U.S. is not the only country to succumb to the liberalization narrative. France and Germany, two of Russia’s economic partners and natural gas importers, viewed the 2008 election of President Medvedev as potential evidence of Russia’s liberalization and the basis for new cooperation, despite the Georgian conflict. It seems that only now is the West seriously confronting the realities imposed by Russia’s pursuit of power. Hopes of liberalization are being cast aside in favor of a reality where Russia is driven to consolidate and expand its power.

Few would seriously contend the assertion that contemporary history has favored the rise of democracies. In fact, it is not unreasonable to assume that Russia will one day become more democratic and economically liberal, as it seems to be the trend among all civilizations.

However, events in Russia show that using a belief in a constant evolution toward democracy as the finite basis for policy leaves us vulnerable to realpolitik. American policymakers should view Russia through the Great Power lens to more accurately assess Russia’s actions and prepare for the Kremlin’s manipulation.

The conclusion above also begs a larger point: Narratives capitalize on the human desire to see causation in the world. They are often useful in decision-making, but we must be careful in how we craft and analyze them. Determining which narrative best fits the information available—whether its one of velikaya derzhava or liberalization—is an essential first step in determining policy.