When I first got to Stanford six weeks ago I didn’t know what to expect. As a conservative, I wasn’t sure how I’d fit in at Stanford. But when I got here, people were more receptive to conservatism than I had expected. Even the students that disagreed with me were civil.

But clearly there are some people at Stanford that are not at all receptive to speech they disagree with. When I helped the Stanford College Republicans flyer for Ben Shapiro’s event (tomorrow night in MemAud), I occasionally received dirty looks when someone saw me putting up the flyers. But the real problem was that, days later when I return to dorms I had flyered, I would find my posters gone or defaced.

This was especially true in my dorm, Donner, where replacing tattered and missing posters has become part of my routine. 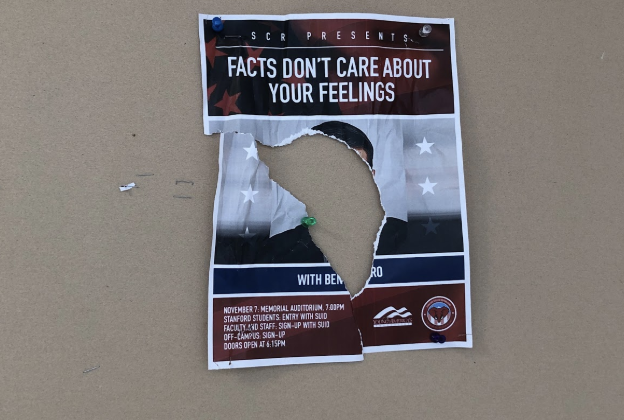 Ironically, the “tolerance includes listening” and “disrupting speech is fascism” flyers I hung next to the Shapiro flyer were also torn down (pictures are from when they were simply mangled). When I mentioned this to my RAs, many if not all of whom lean to the left, they responded admirably. They have made it clear in our last two house meetings that tearing down flyers is unacceptable. They have even been putting flyers left on the ground back up.

Casa Zapata has banned flyers altogether after their residents harassed a group of SCR members. When I entered Zapata with flyers, a resident peeked at my flyers, and only after seeing they were for the Shapiro event did she mention that flyering was banned.

Freedom of speech is the first fundamental right mentioned in the Bill of Rights, and it is absolutely critical in the University setting. This is especially true at Stanford, where it is conceivable that someone in my dorm could one day be the next Josh Hawley or Cory Booker. The political leaders of tomorrow should be practiced in engaging with ideas they disagree with - not censoring them.

It seems like many leftist Stanford students and administrators have abandoned Voltaire’s famous words, “I may disapprove of what you say, but I will defend to the death your right to say it,” instead preferring to implement the aphorism “Free speech for me but not for thee.”

Ben Shapiro welcomes questions from people who disagree with him, so much so that he lets them cut to the front of the Q&A line. To all students, liberal and conservative, come to Memorial Auditorium tomorrow night at 6:45 PM to hear him speak.

The Metaverse: A Universe without Culture