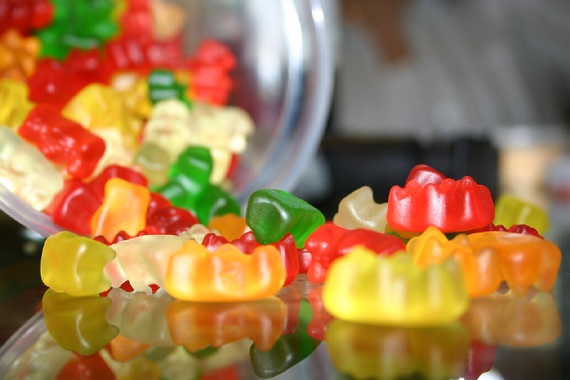 When we were younger, my brother Justin always avoided eating the gummi bears topping his chocolate ice cream until he finished everything else. Like all Americans, Justin would not have had the opportunity to enjoy this tantalizing gummi treat if the German company Haribo—the first to sell gummi bears— had not entered the U.S. market during the 1980s. Today, Americans like my brother and I can purchase Haribo gummi bears in all fifty states in places ranging from movie theaters to supermarkets.

Haribo sells a delicious product, yet it would have difficulty distributing gummi bears without the Federal Aid Highway Act of 1956 and its authorized 41,000 miles of highways. The dollar’s legal monopoly standardizes the transaction instrument between consumers and Haribo, and the Constitution prevents California from imposing tariffs on gummi bears imported from Maryland which would otherwise raise costs for Haribo and consumers with a sweet-tooth. Government action makes it easy for us to get our sugar fix.

However, if Hans Riegel hadn’t been inspired to invent the gummi bearby trained circus bears, then no amount of government activity could create the product. Effort, innovation, and capitalism are essential for a free society and a prosperous economy.

In 1977, the National Socialist Party of America planned a rally in Skokie, Illinois which was a predominantly Jewish neighborhood. Widespread protests from the city’s residents forced officials to ban the group’s rally. I am Jewish, and if the American Nazi Party planned a protest in my neighborhood, I too would be tempted to pressure the government to block the group. However, our Constitution protects free assembly. The American Civil Liberties Union sued, and in a landmark decision, the Supreme Court forced Skokie to allow the protest. A weak central government would not have the power to force a mere town in Illinois to permit a protest just as a weak central government would be unable to build highways across the country during the 1950s, allowing commerce to thrive.

Government wielded significant power in each of these cases to assist business and uphold civil rights. But don’t mistake these examples as evidence of a need for widespread government intervention in business. By constructing highways, backing the dollar, and offering legal protection for property rights, the government merely establishes conditions that are necessary but not sufficient for most businesses to succeed—it is not helping specific businesses succeed at their competitors’ expense. Powerful political institutions are necessary to protect individual liberty and to catalyze economic prosperity yet these same institutions can endanger both freedom and economic success.

Effective strong governments are perpetual balancing acts. A society can neither be free nor prosperous without one; a society is never more than a step away from losing liberty with one. The same government that protected the American Nazi Party’s right to free speech also spies on its citizens’ electronic communication. The same government that spent millions to develop a national highway system continues to hamper businesses with onerous regulations and mandates. The same government that developed Common Core standards to empower children is bankrupting them through egregious spending on entitlements.

A strong government is liberty’s best friend is liberty’s worst enemy, and the Founders recognized this when they drafted the Constitution. In the first of the Federalist Papers, Alexander Hamilton describes how “the vigor of government is essential to the security of liberty.” If the Framers wanted a weak government, why did they discard the Articles of Confederation?

The Constitution juxtaposes the need for strong government with strong limitations. The government has the supreme power to draft an army, yet authorization from two branches of government—a Congressional declaration and a Presidential signature—are needed to launch a war. Only the federal government can negotiate treaties with foreign nations, yet the Senate must ratify any agreement. Congress can pass a wide range of laws within its enumerated powers, yet the President has to sign them and the Supreme Court adjudicates disputes between states. The Constitution can be amended, yet the process is tough: two-thirds of Congress must approve an amendment before it is sent to the states. These checks and balances would be unnecessary if the government was meant to be relatively powerless. The power needed to secure liberty is also sufficient to squash it, and the Constitution seeks to ensure that the federal government’s immense power is not abused.

Conservatives should not advocate for a weak government when they assail the modern state. Although the government has certainly exceeded a proper size relative to its constitutional powers, the primary issue is how the government uses its immense authority. For example, the Interstate Commerce Clause has been used to regulate farm produce that never leaves a state: under the Agricultural Marketing Agreement Act of 1937 the federal government can require food handlers to set aside a portion of their produce for the government—removing the food from the market. Our nation is $17 trillion in debt largely because the government has used its authority for financially unprecedented projects. The federal government has a large role in many aspects of our lives and it twists constitutional language to justify using its power in new ways. But the solution is not a return to weak government; it is a return to an era when the government recognized restraints on its immense power.

Feeble governments claim to guarantee liberty and prosperity, yet they are unable to defend it. We must rebalance the scales of powerful government and use political power to advance freedom, not to imperil it. America’s constitutional framework suggests a roadmap for this balance, and we have strayed far from it: punishing thrift and hard work through onerous regulation and debt-financed spending. Government can be a force for prosperity if it doesn’t simultaneously inhibit it. Highways allow the gummi bear business to thrive, yet if government imposed excise taxes on junk food, I may no longer be able to buy a delicious pack of bears before every movie.

By the way, my brother never got to eat his gummi bears. As he was about to dig his spoon in to enjoy the candy he had worked so hard to save, a family member asked for a taste and ate them all.