A week ago, residents of Enchanted Broccoli Forest discovered the words “No crackers!” scrawled in paint across their bus. Targeted towards whites from the South, especially ones who are poor and rural, the term “cracker” is widely recognized as a racial slur.

You would think that residents of a supposedly progressive and racially conscious house would jump to remove a racial epithet from house property. Not so. When a resident posted a picture in the EBF GroupMe last Thursday, peers brushed aside the incident with off-color jokes. 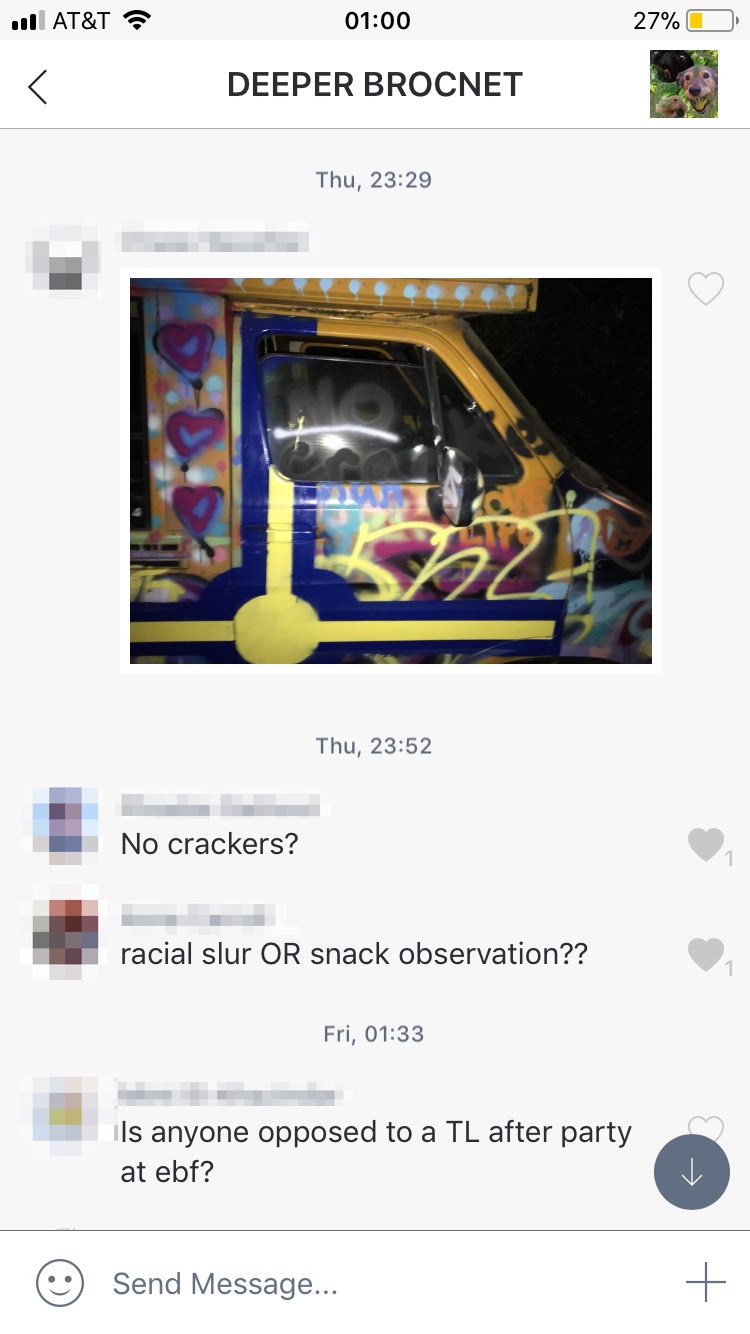 Disappointing, but, unfortunately, the story gets far worse. After a week, another resident, Ian Knight — a first-generation, low-income, white Southerner who felt understandably uncomfortable with the slur — raised the issue in the house GroupMe and was immediately dismissed as an apologist for “reverse racism.” 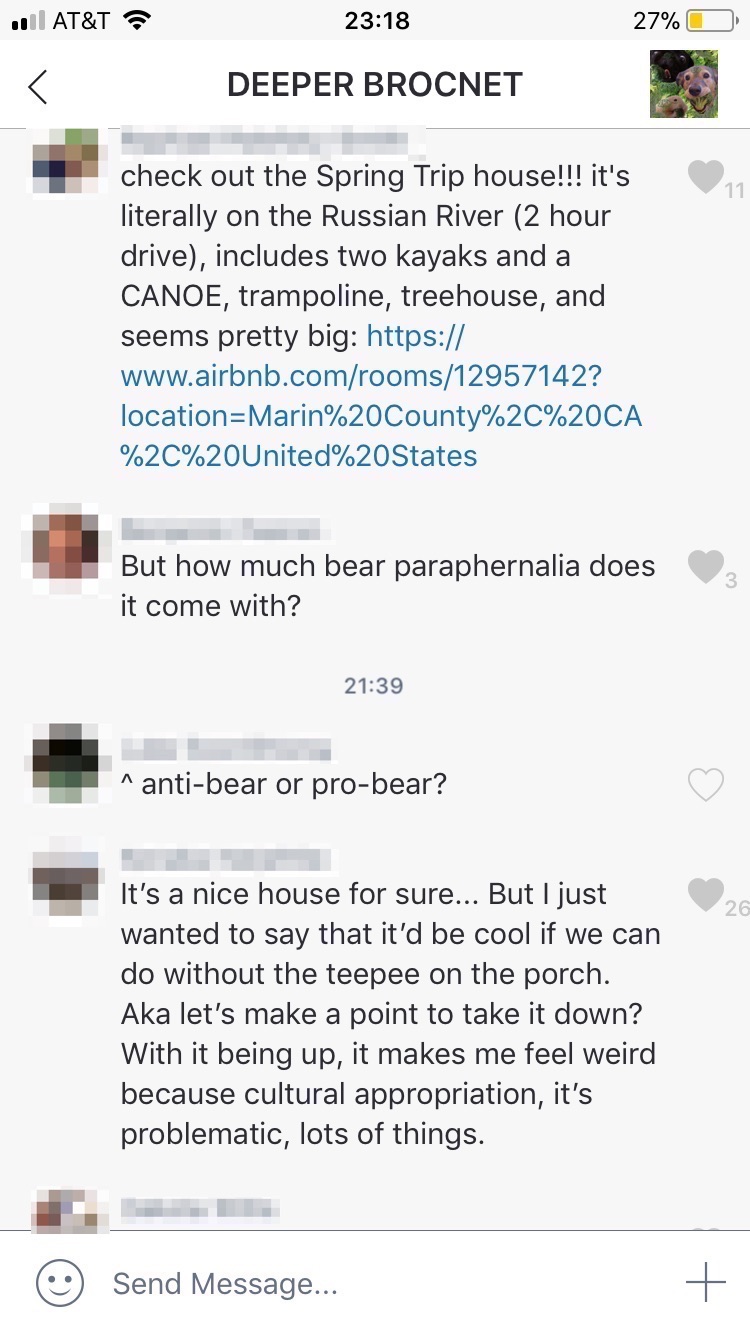 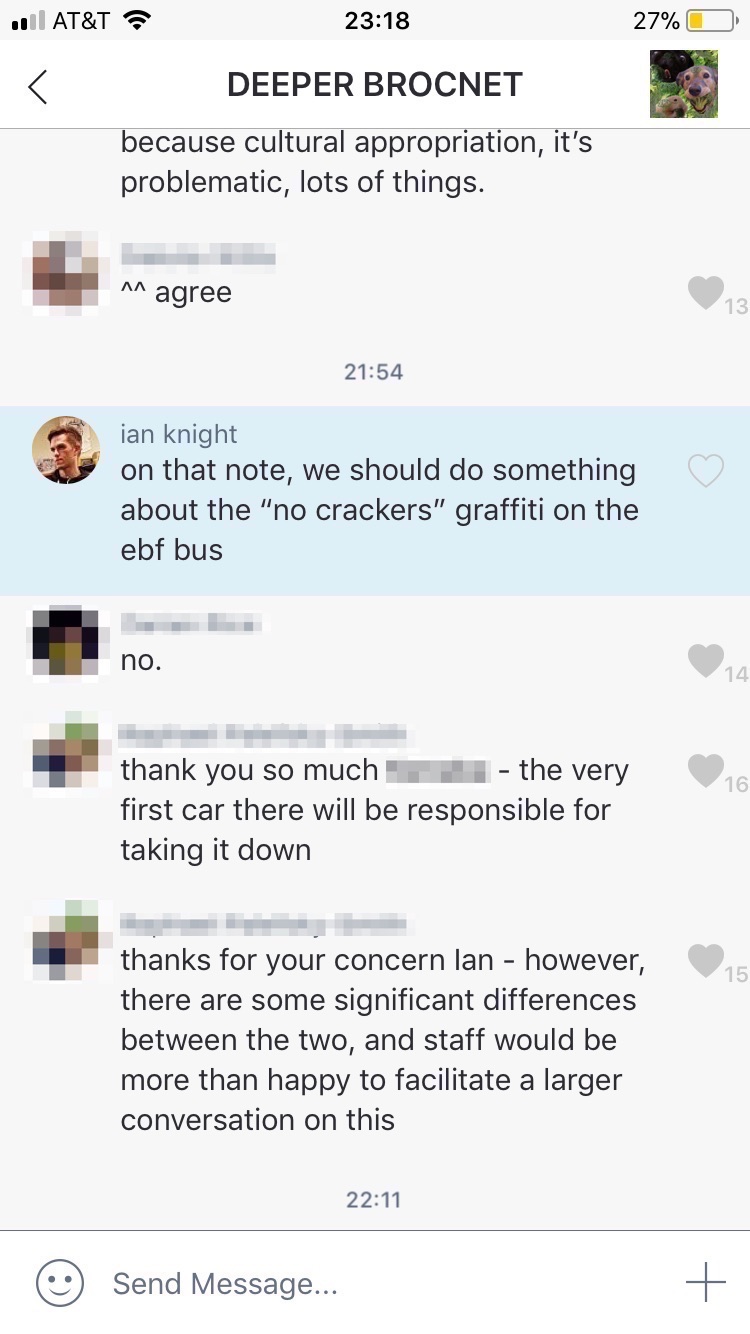 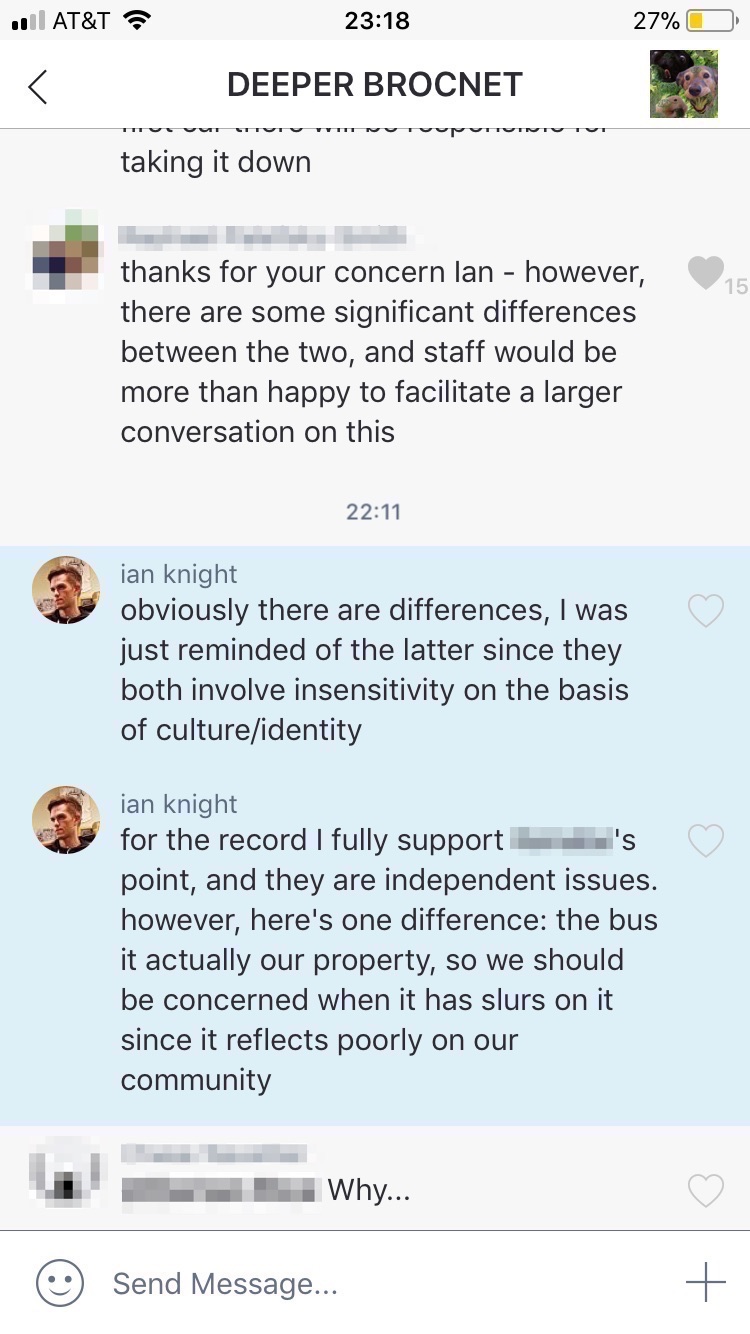 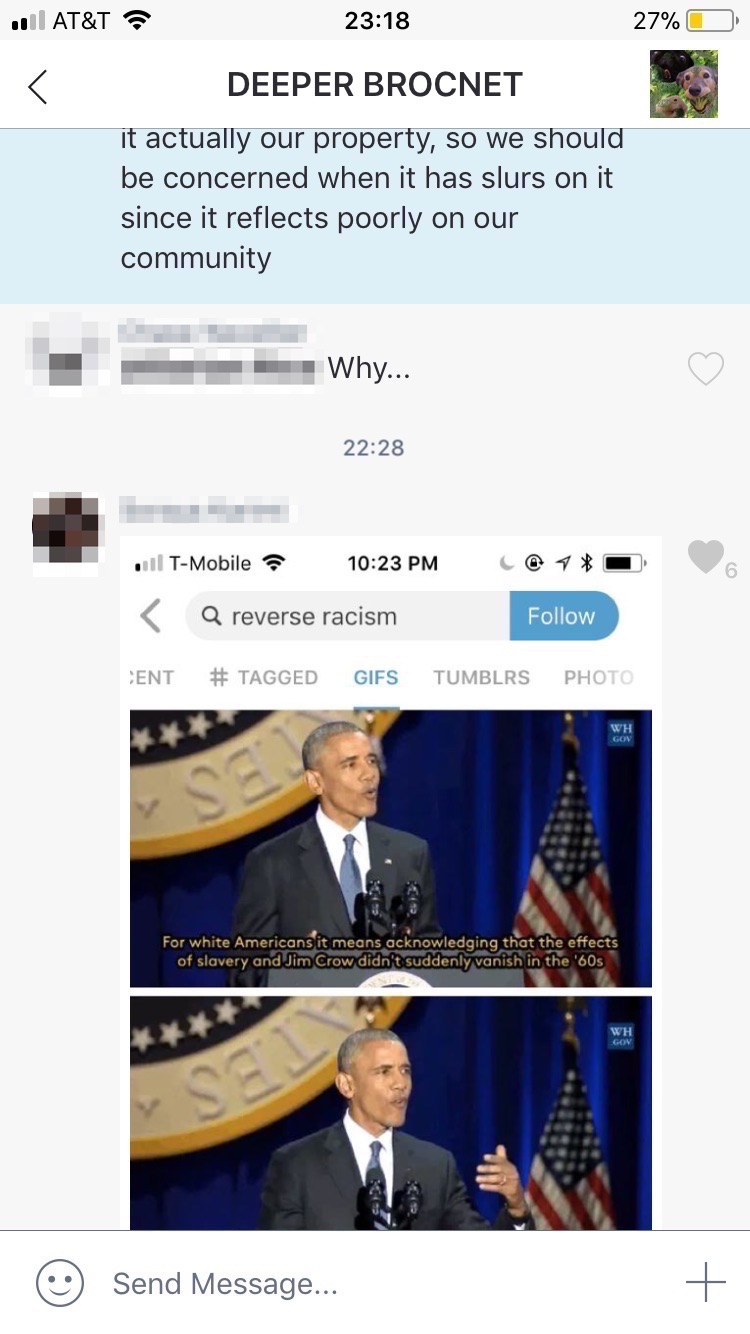 When other residents had worried that the “problematic” fake tepee on the porch of their retreat AirBnB represented cultural appropriation, staff members immediately responded: the tepee would be removed by the first car to the house. But when Ian pointed out that something should be done about the blatantly racist graffiti on the bus, his concerns were brushed aside. One resident simply responded “No,” receiving fourteen likes from house members.

Other residents accused Ian of piggybacking on the complaints of people of color to raise his less-important “white” concerns, while others shamefully tried to excuse the slur for being “deserved.” The graffiti didn’t matter because white people are, by nature, oppressive and racist, they said — all while enjoying the best university in the world, while rural whites suffer grinding poverty. If anything, a blatantly racist act of vandalism is far more clear-cut than the murky concept of “cultural appropriation.”

Residents repeatedly brushed aside Ian’s discomfort with the racist graffiti. Finally, a staff member explicitly endorsed the message on the bus, telling him (erroneously) that since “the word cracker, has been historically defined to mean ‘racist white person,’” that she agreed with the graffiti. Apparently too enlightened to take ten seconds to read the definition of “cracker” as a term “for white people, used especially against poor rural whites in the Southern United States” (never including the idea of racism), she told her first-generation white Southern resident: “I hope we have no crackers here.” If such ignorant and bigoted remarks are not grounds for immediate dismissal from a staff position, we are not sure what are. 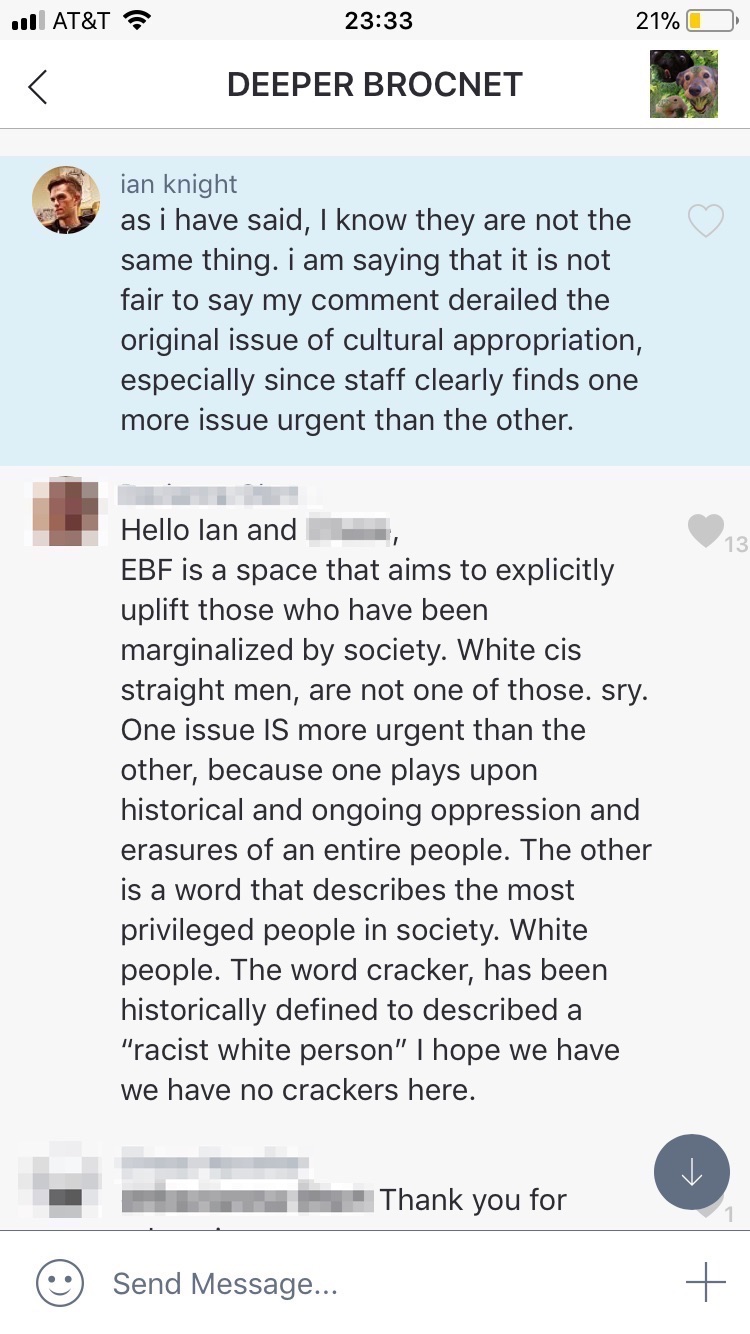 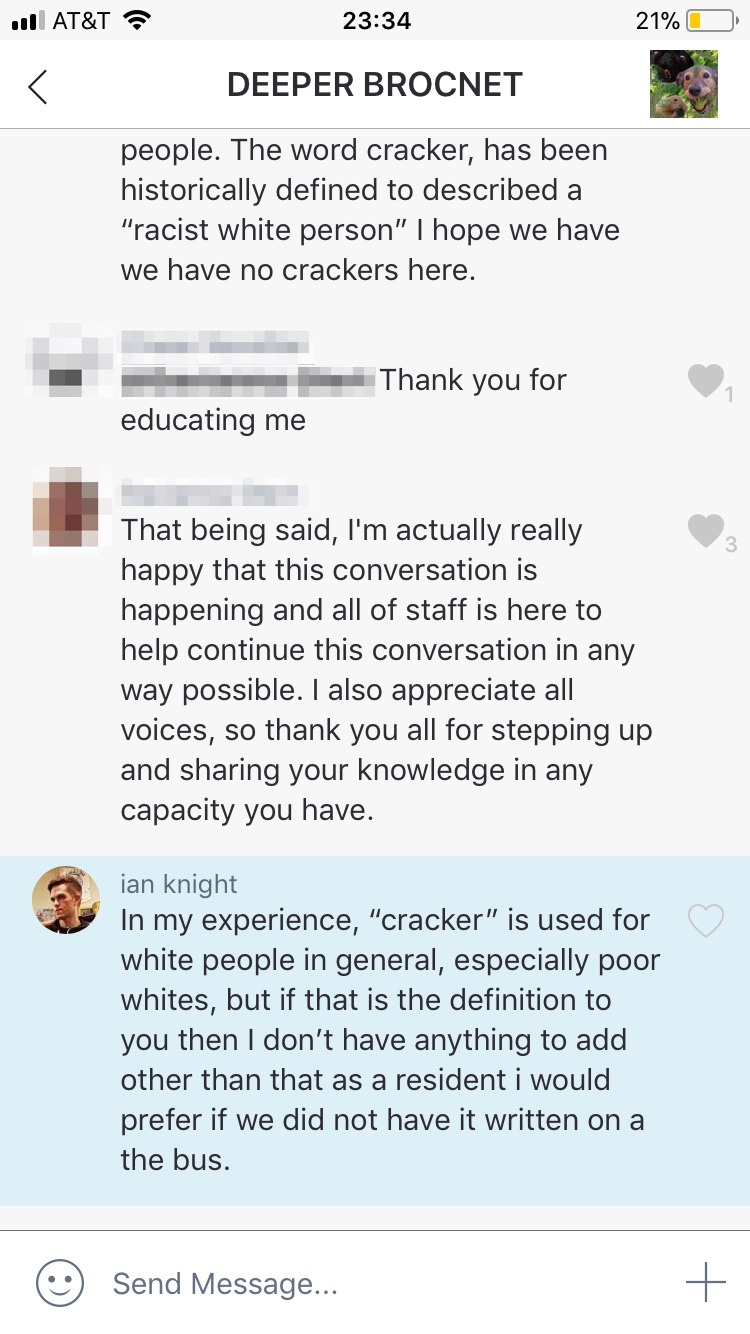 EBF can pretend to be socially progressive all it wants, but this incident reveals alarming hypocrisy: the right kind of racism is just fine. While the staff reaction alone is shocking, other EBF residents did not only ignore or play down the slur, but also supported its appalling sentiment. To a mind-boggling sixteen likes from the group, one resident even stated that he was “strongly against removing the ‘no crackers’ spray paint”! He claimed, absurdly, that addressing racism against white people should be delayed until every other possible form of oppression is eradicated. One could only imagine the outcry that would have ensued had this comment been directed at anyone except whites. 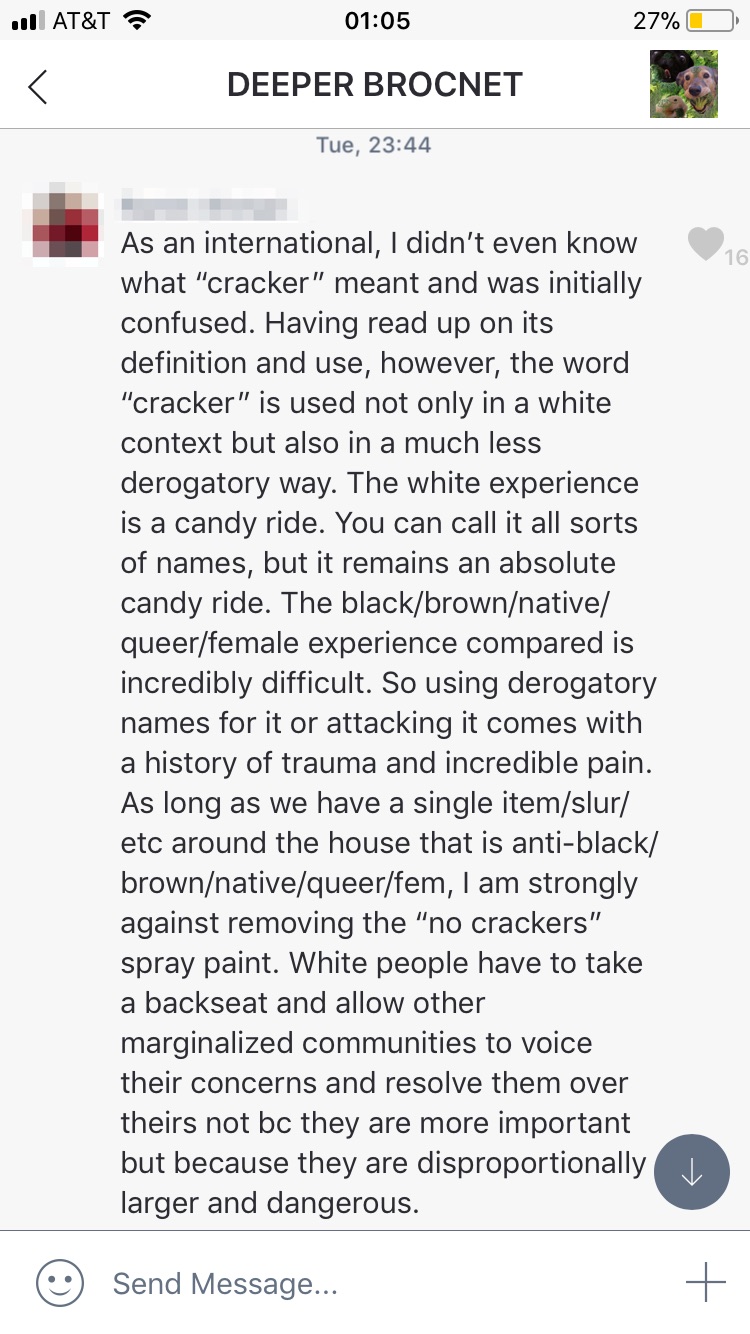 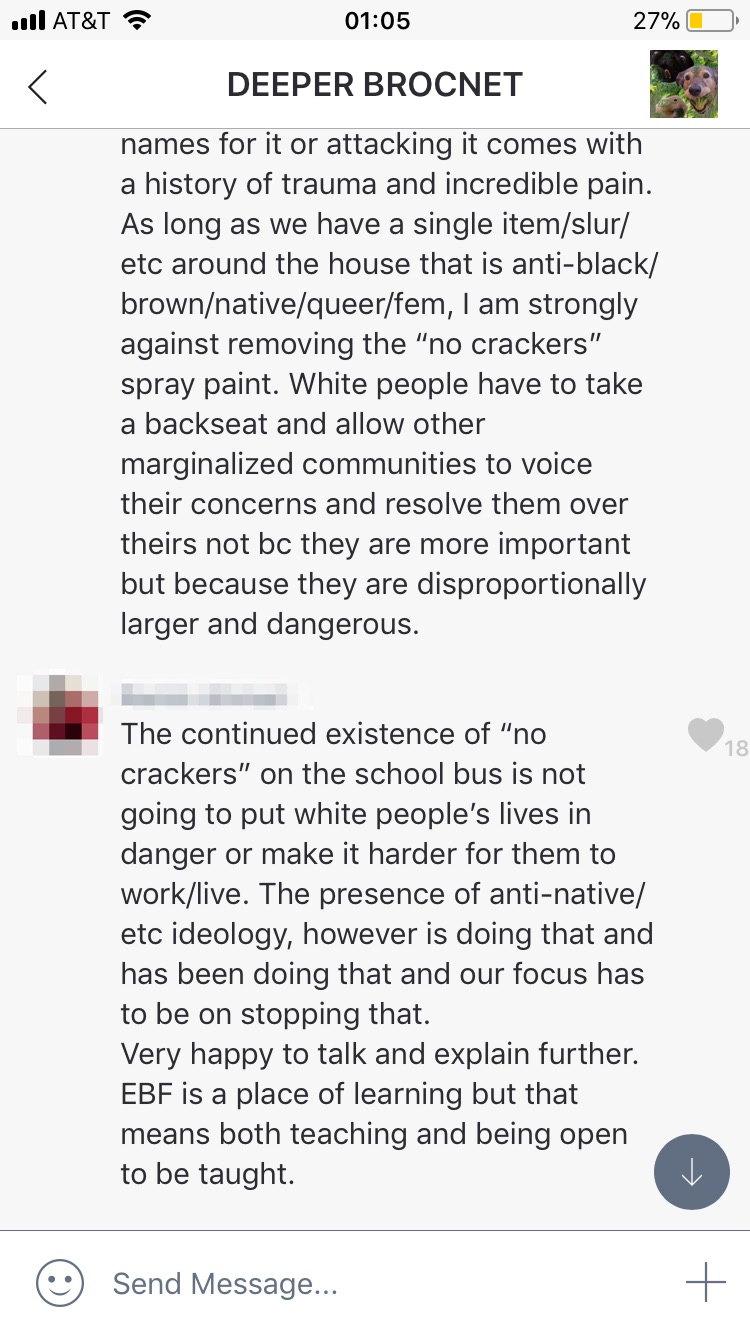 Unproductive claims about relative levels of injustice should not prevent us from condemning racism in all its forms. The rhetoric that many students used in defense of “cracker,” including arguments that “it won’t put white people’s lives in danger” and that “it’s much less derogatory,” is reminiscent of specious claims that racism is no longer a problem in America because blacks are far less oppressed than they once were.

To deny the bigotry of the word “cracker” reveals the hideous double racial standards that poison our campus. Though each and every member who liked the comments targeting Ian would eagerly claim to support intersectionality, their denial of economic inequality reveals that many Stanford students only care about certain forms of injustice. When one member notes that, “EBF is a space that aims to explicitly uplift those who have been marginalized by society,” but turns around and justifies the term “cracker” as an identifier of “white cis straight men” who are “racist,” she claims her place alongside other reality-distorting bigots.

As much as the co-op counterculture may delude students into believing they are not privileged and different from their “sellout” classmates, the bottom line is that every one of them attends the best university in the world. Meanwhile, many poor rural whites, written off as “trash,” face rising jobless rates, drug epidemics, and familial decay. Supposedly “woke” EBF residents would benefit from looking outside the Stanford bubble to avoid what law professor Joan Hastings condemns as “class cluelessness — and in some cases, even class callousness.” Though they claim to recognize intersectionality, these students failed to recognize poverty as one of the most obvious ways that anyone could be disadvantaged, instead buying hook, line, and sinker the catchphrase “white people can’t be oppressed.” To allow these staff members to continue to hold their positions as community leaders would be a tacit endorsement of this sentiment.

A house that truly condemns racism would have immediately removed the racial slur from the bus, rather than ignoring and outright defending it. Why didn’t Ian’s community grant him the basic respect to take five minutes to remove a slur that deeply discomfited him? Stanford students should ask themselves how such behavior ended up in a bastion of 21st century liberalism. The self-righteous warriors of EBF justified racism in the name of social justice.