“Any intelligent fool can make things bigger, more complex, and more violent. It takes a touch of genius to move in the opposite direction.”
~ E.F. Schumacher

The entire country stops on April 15th. For weeks leading up to Tax Day, families and businesses scramble to get their finances 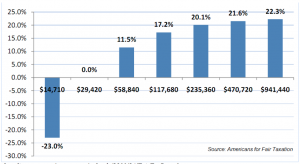 organized. According to an IRS study, the median individual taxpayer spent $258 for tax preparation in 2007, 60% of individual taxpayers hire accountants, and 30% purchase software. Nationally, 6.1 billion hours and $163 billion are spent in tax preparation each year. The national cost of simply complying with the tax code—let alone paying taxes themselves—is enormous.

Tax preparation is so complex that, even after pouring in time and resources, it is nearly impossible to file correctly. When Money Magazine and PC World charged 46 accountants and five tax preparation programs with the finances of a hypothetical household, each of them came up with a different result for its tax return. The IRS estimates that almost 40% of the public is out of compliance with the present tax system, mostly unintentionally due to the enormous complexity of the tax-paying process.

When we look at the 3 million words that make up our tax code, it is easy to understand why this structure is so inefficient and ambiguous; the American tax system is bloated. There are over 800 different forms and schedules to sort through for reporting financial information to the IRS. The instructions alone for Form 1040, the U.S. Individual Income Tax Return form, are 189 pages long.

Americans For Fair Taxation, a nonprofit, was formed in 1995 with the goal of learning what Americans want in a tax system, what would most benefit them, and how it could be carried out. In its research and polling, the organization found that the complexity of our tax code invites inefficiency and ambiguity, and, in turn, unfairness. With these problems in mind, a team of economists developed the Fair Tax, an alternative tax structure radically different than our current one.

Under the Fair Tax, every person living in the United States would pay an inclusive 23% sales tax on the consumption of new goods and services beyond the poverty level. Americans For Fair Taxation proposes the Fair Tax as a “replacement, *not *reform” of all federal income taxes, including personal, estate, gift, capital gains, alternative minimum, Social Security, Medicare, self-employment, and corporate taxes. This would not defund any programs; the source of funding would simply change. For example, Social Security would operate as it does today, the only difference being that its funds would come from the broadly-based sales tax rather than a narrow payroll tax.

However, basic income taxes are regressive, as necessities make up a greater percentage of less-affluent individuals’ paychecks. To combat this, the Fair Tax proposes a monthly, universal prebate for consumption up to the poverty level. The effective tax of consumption at the poverty level, twice it, and three times it would be 0%, 11.5%, and 17.3%, and so on. The graph below shows the effective tax rate for a family of four at various consumption levels.

Another benefit of the fair tax is that it combats a free-rider problem apparent in our system of taxation. Many non-citizens do not pay income taxes while they benefit from the infrastructure funded by our current tax system. Under the Fair Tax, all consumers would pay taxes when they purchase goods or services. This would more accurately reflect the benefits they receive in the form of government roads, education, health care, and other services. The Fair Tax would also promote lawful immigration. Because unlawful residents would be ineligible for the prebate, they would pay the full 23 cents on every dollar spent.

Americans For Fair Taxation asserts that the Fair Tax would give our economy a boost; companies would operate tax-free on American soil, rather than paying the current corporate income tax rate of 35% that is such a disincentive for economic growth. It also argues that the Fair Tax would expand charitable giving. Currently, only 30% of donations that are itemized receive any tax benefits. Under the Fair Tax proposal, people would be able to make charitable donations out of pre-tax dollars, thus lowering the cost of charitable giving, particularly for those who do not itemize.

The idea of such a complete overhaul of our system is, understandably, a bit frightening. It is hard to imagine what it would be like without these taxes that have been such a central part of American life. When I first learned of the Fair Tax and its plan to do away with the federal income tax, my immediate reaction was, “That is crazy.” However, after learning more about the proposal, I realize that I felt that way simply because I knew no other reality.

In response to this attitude, Americans For Fair Taxation points out that “many civilizations in history have relied solely on transaction-based consumption taxes”, and that both Florida and Texas already rely almost entirely on the revenue from sales taxes. In fact, the United States implemented its first income tax as a temporary tax during the Civil War and only became an integral part of our tax system with the passage of the 16th amendment in 1913.

Beyond the specifics of its plan, Americans For Fair Taxation offers an important lesson as we look to our financial future: Only by suspending our assumptions and looking at the circumstances analytically can we make the American system better for taxpayers.