An article entitled “Trade-In Program Tunes Up Economic Engine” in today’s Wall Street Journal discusses the economic effects of the Obama administration’s “Cash for Clunkers” program, which some economists have argued might be the *most *stimulating component of Obama’s stimulus package:

“A billion dollars for ‘cash for clunkers’ looks dramatically more efficient, dollar for dollar, than anything else the Congress has passed yet,” Credit Suisse economist Neal Soss wrote in a note last week. The program played a big role in his upward revision of his projection for gross domestic product. Mr. Soss now expects GDP to grow at a 2% rate in the third quarter, up from his previous 1.3%.

The article mentions one of the major rebuttals to this argument — a recent paper by Stanford/Hoover economists John Taylor and John Cogan, which argues: 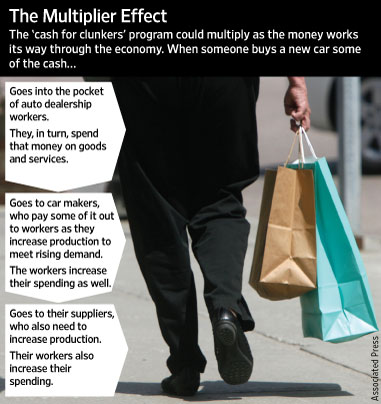 Yet this highly generic critique of government spending misses the boat with respect to the “Cash for Clunkers” program. The stimulative effects of the policy have been obvious — the rate at which the billion or so dollars was spent should be evidence enough. Unlike a huge majority of the rest of Obama’s “stimulus” bill, this policy actually got money out the door quickly and into the hands of American consumers, rather than into the hands of bureaucrats to be spent on rail systems many years into the future.

And while Taylor/Cogan’s argument may hold up within a theoretical framework, years of empirical evidence seem to suggest the contrary — that expectations of higher taxes (if at all existent) have no effect on consumer spending habits. Americans have continued to spend and borrow at alarmingly high rates despite the fact that the government has maintained its expansion for decades.

As for the reduced multiplier effect argument — even the Wall Street Journal has acknowledged the viability  of the clunker program’s Keynesian approach. Check out the image accompanying the WSJ article, which argues that money allocated through the clunk program “could multiply as it works its way through the economy.” Mr. Murdoch can’t be happy about this one…