The Jewish state has been vilified so extensively that it would take a book to address each individual criticism. In this column, then, I want to focus on one issue: apartheid. 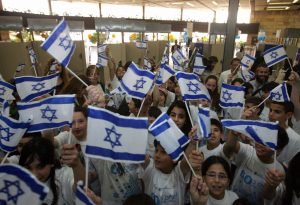 An email promoting the Stanford protest on Thursday, November 29th in honor of International Palestine Solidarity Day encouraged participants to “speak your mind on systems of oppression, apartheid, and imperialism during the speak out!” This email implicated Israel as an oppressive, apartheid-practicing country.

And the website of Stanford group SPER, Students for Palestinian Equal Rights, says it “formed in response to the continued practice of apartheid by the state of Israel.”

Yet Israel is definitively not an apartheid state.

According to the UN and international law, apartheid is defined as an “institutionalized regime of systematic oppression and domination by one racial group over any other racial group.”

The term comes from an Afrikaans word describing South Africa’s abhorrent persecution of its black majority through legal, government-sponsored means. For most of the second half of the 20th century, black South Africans were prohibited from voting and holding political office. They were restricted from “whites-only” public facilities.  While white South African children had their education fully paid for by the government, black children received vastly inferior non-government subsidized educations.  Systematically and brutally oppressed, black South Africans were treated as inferior. The government did not just allow this to happen—it encouraged and legalized the process.

Arab citizens of Israel, on the other hand, are granted full and equal rights under the law. Arab Israelis have full voting rights. They may and do hold political office – right now, 17 members of the 120-member Knesset are Arab. Arabic is an official language of Israel. All Israeli citizens have free movement throughout Israel, and this includes Arab Israelis, who may use all of the same public facilities that Jews do. Arab Israelis may live in any place that Jewish Israelis may live. Arab children in Israel receive a government-subsidized education until they graduate. Arab Israelis are able to study in Israeli universities and many do. The Israeli government not only does not oppress Arab Israelis or treat them as inferiors—it actively condemns discrimination.

Furthermore, Israel regularly transports medical supplies, food, and other aid to the Palestinians living in Gaza – even as rockets are launched from Gaza at Israeli civilians. This humanitarian action in no way resembles the actions of an apartheid state.

In a recent article in The Stanford Daily, “Why I care about Israel’s occupation of Palestine,” Kristian Davis Bailey referred to the “wall” between Israel and the West Bank as an “apartheid wall.”

Yet the security fence exists to protect Israel from terrorist attacks. It was not built to institute apartheid and does no such thing. It was built because between 2000 and July 2003 (when Israel built the first segment of the fence), 73 Palestinian suicide bombers entered Israel from the West Bank and successfully detonated bombs with the intent to murder as many Israeli civilians as possible. It was built because those 73 suicide bombings killed 293 innocent Israelis and injured over 1900.

The security fence has successfully limited terrorist attacks from the West Bank. It may inconvenience some Palestinians, but it saves lives. Israel has the right to defend itself.

When Palestinians denounce rather than celebrate the murder of Israeli civilians, then maybe there will no longer be need for a fence. (A 2008 poll run by the Palestinian Center for Policy & Survey Research found that 84% of Palestinians supported the Mercaz HaRav massacre, in which eight Jewish Israeli students were murdered and eleven injured by a Palestinian gunman. More recently, after the November 21, 2012 bombing of a bus in Tel Aviv during which many Israeli civilians were injured, mosque loudspeakers across Gaza broadcast a celebratory message, claiming the attack was a victory from Allah. Palestinians handed out candy and celebrated in Ramallah and across the West Bank.)

To criticize Israel for supposedly being an apartheid state while exempting other states from criticism is offensive and malicious. Kristian Davis Bailey, Students for Palestinian Equal Rights, and others who launch such criticisms may not be anti-Semitic. However, in perpetuating the idea that Israel deserves censuring while other, far more reprehensible states do not, these people promote anti-Semitism.

Mahmoud Abbas, President of the Palestinian Authority, in a July 28, 2010 speech to Egyptian media said, “I will never allow a single Israeli to live among us on Palestinian land.”

It is suspected that more than 20,000 “honor killings” occur each year around the world. An honor killing is when a woman is murdered for having brought “dishonor” upon her family. This often just consists of talking to a man. In Lebanon around 40-50 women are killed each year for having brought “dishonor” upon their families. 12 women were honor killed in the West Bank and Gaza in the first seven months of 2012 alone. Men in the West Bank are *legally exempted *from any form of punishment if they kill a woman in their family because she has acted dishonorably.

In Egypt, 70,000 Palestinian residents of Egypt were denied citizenship. Says Ahmed Mahmoud Zabar, “We can’t own a house, land, or get a loan from the bank despite the fact that I was born here and have no idea what is Palestine.”

Where is the anger and vitriol for *these *systems of apartheid? Where are the protests against the Palestinian Authority, Lebanon, Hamas, Egypt, Iran, Saudi Arabia, Sudan, Syria, or one of the numerous other countries that does not afford all its citizens equal rights?

To criticize the Jewish state but keep silence about countries with far worse records on human rights?