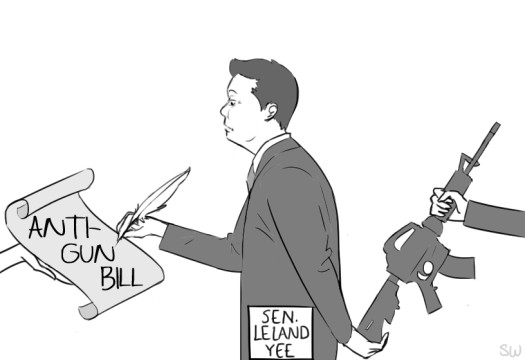 From The Mercury News:

Federal prosecutors on Thursday again vowed to add racketeering charges to the political corruption and organized crime case that includes suspended state Sen. Leland Yee, assuring a judge that “a majority of the defendants” will face that sweeping criminal charge.

During a brief hearing before U.S. District Judge Charles Breyer, Assistant U.S. Attorney William Frentzen said “RICO charges are coming,” although he did not indicate that Yee would be among the 29 defendants to be hit with one of the broadest charges in a federal prosecutor’s arsenal. Most legal experts have questioned whether it would be an effective strategy to include the state legislator in a racketeering charge.

In response to defense concerns about the scope of the case, Frentzen would only say that most of those already charged in the case will be hit with a racketeering count when a revised indictment comes down this summer. The U.S. Justice Department in Washington, D.C., must approve all racketeering indictments.

Breyer has given the government until mid-July to file its updated, or “superseding,” indictment. The defendants are scheduled to appear in court next on July 24.

The 65-year-old Yee has pleaded not guilty to gun trafficking and corruption charges that accuse him of accepting bribes in exchange for promises of political favors. The San Francisco Democrat is alleged to have traded his political juice for money to pay off campaign debts as he pursued a run for secretary of state, caught in wiretapped conversations with undercover FBI agents offering to broker an international arms deal and carry out political favors for bribes.

The case originated as an investigation into Asian organized crime and Raymond “Shrimp Boy” Chow, a central figure in the indictment.

Thursday’s hearing primarily dealt with whether the defendants and their lawyers would be barred from making public any of the evidence the government must now turn over as they prepare for trial. Breyer sided with the government’s demand that the material be kept under wraps, disclosing that he had added familiarity with the evidence because he was one of the local federal judges to approve the government wiretaps.