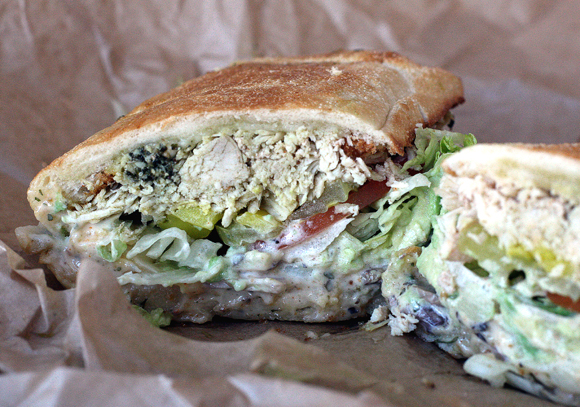 I had my first “Ménage à Trois” during Admit Weekend three years ago and accepted my place at Stanford the same evening. I can’t say the two events were entirely unrelated, either– I love Ike’s sandwiches. As anyone who’s been on campus for even a short while can tell you, Ike’s is part of the Stanford culture. Want to show off your campus’ awesome food to out-of-town friends? Take them to Ike’s. Want to ensure your event will be well attended? Put two short words in the subject line: “FREE IKE’S!!!” Need to get out of the dining halls for a refreshing change of pace? One word: Ike’s.

So after hearing that Ike’s Place had lost its bid to operate in Huang for another four years, I was stunned. I knew that Ike’s contract would be up for renewal this year, but, like the NCAA Director’s Cup, it just was not something I ever thought Stanford would let slip away. Worse, Ike’s was to be replaced by Residential and Dining Enterprises (R&DE). There are many reasons such a takeover would be devastating for Stanford (price mark-ups, limited operating hours, sparser vegan/vegetarian and general menu options, etc.) but Andrew Aude and others have already written some great pieces detailing those issues. However, what’s most concerning is how the decision was reached.

The process began last fall when Lindsey Akin, the Services Manager of the Stanford Science and Engineering Quad, sent out a survey. In it, she asked responders to indicate important qualities for a restaurant to have, such as minimal waiting time, staff friendliness, and a low average price for entrées.

The survey only asked general questions about food service and gave the impression that Ike’s was a shoe-in, stating, “for legal reasons, we have to invite several businesses, not just Ike’s, to bid” (emphasis added). This is simply not correct. According to Jamie Beckett, the director of communication for the School of Engineering, Ike’s contract “could have been extended” but instead the space was put up for bid. This shows that the key decision-makers had reservations against simply renewing Ike’s contract.

Here are two of the questions regarding wait time and price:

What do you think is a reasonable and realistic price point for your lunch – food and drinks only, not including tax and optional gratuity?

What do you think is a reasonable and realistic amount of time to wait, starting with getting in line up until your food is ready and ‘in your hand’?

Of course if you have students filling out a survey with parameters of price, wait time, and quality of food, then you’re going to hear that students want the cheapest, best quality food without having to wait. How could you expect any other answer? (Let’s just ignore the fact that Ike’s allows you to order ahead of time and pick up your lunch with almost no wait at all.)

Akin downplayed her own survey, saying that it contained just “general questions” to “show vendors what’s important.” She reiterated that her committee represented the interests of faculty, staff, and students throughout the bid process. However, this committee consisted of just two students and six staff members (zero faculty members!). For reasons still unknown, all of the committee members remain silent and unidentified.

The bid process lasted from November until April, yet nobody knew who else was bidding against Ike’s. Although the decision was announced publicly on April 25th, R&DE was notified that they had won in mid-March. Yet as early as February it appeared that R&DE expected a victory, based on a February 22nd job posting. The posting was for a  “Project Manager” whose principal responsibilities involve coordinating an unnamed “food and beverage” construction project from beginning to end. Unless R&DE announces another Arrillaga dining hall in the coming weeks, this position could have been intended for no other project but the construction of Ike’s replacement. The chronology of these events suggests that R&DE knew prematurely that they were to win the contract and raises important questions about their influence on the decision-making process.

R&DE is notorious for shrugging off student opinion in the past (Suites, anyone?), but this is the limit. According to a recent survey of over 2700 students, 97% students prefer Ike’s to R&DE, and faculty in the SEQ have also voiced support for Ike’s. It is clear that this decision was not made with the interests of the wider Stanford community in mind.

Share this article with your friends, email those in power via saveikes.net, and attend the rally in White Plaza at noon this Friday.  Let’s show the “vendor selection committee” and R&DE administrators that they can’t ignore us any longer. Save Ike’s!