The United States has historically prided itself on its adherence to the rule of law: the notion that a nation’s constitutional and other laws must guide its government and not the other way around. In America, these laws are derived from our nation’s most powerful and important legal document, the Constitution, which enshrines our nation’s most basic legislative principles. Even today, Americans take the belief that the Constitution should guide government very seriously; any alleged circumvention of a constitutional provision will almost certainly lead to a Supreme Court case.

Our forefathers realized that the constitutional laws that govern the nation may have to be changed from time to time. To meet this need, they empowered the legislature to amend the Constitution, though through a difficult process that illustrates how immutable the Founders wanted the Constitution’s provisions to remain. The Constitution and its tough amendment process are designed to impose strict controls on government power. This brilliant system of checks and balances has protected us from the encroachment of totalitarianism that has befallen so many other nations, and as a result it is widely lauded as a core institutional source of success.

Like previous generations, modern America has experienced its share of encroachments on the rule of constitutional law. The Executive Branch, under the direction of Presidents Bush and Obama, has implemented a number of policies that either circumvent the legislative process entirely or directly contradict the principles that the Constitution embodies. President Bush’s PATRIOT Act and executive orders relating to national security, especially wiretapping expansion, are the two most salient examples under his presidency. In fact, Obama pointed to Bush’s expansion of federal power in his 2008 election and promised to limit such unhealthy trends.

However, in his most recent State of the Union address, President Obama declared that he would maneuver around congressional gridlock and mandate the increase of federal minimum wages. The media widely praised the President’s minimum wage increase because it signaled that, as his term comes to a close, the President plans to act more decisively. Although the consequence of this move is relatively small because it will only increase salaries for about 200,000 federally contracted workers, it represents this alarming trend away from the legislative process.

Another example of executive overreach is the recently revealed PRISM program. Before Edward Snowden exposed the government’s systematic snooping program, Obama oversaw one of the largest constitutional abuses of our generation – warrantless search via digital surveillance. Our constitution guarantees us protections against the unjustified search and seizure of our private belongings through the Fourth Amendment. Under this President, this emblematic limitation of federal power was marginalized in favor of a system which illegally collected information on millions of Americans without their knowledge or without judicial consent as mandated by the Fourth Amendment to the United States Constitution. Oversight of this organization was said to be outside the jurisdiction of traditional national courts and was instead referred to a top secret Foreign Intelligence Surveillance Court that had few checks on its power.

Extrajudicial killings are another brand of questionable initiatives this president has championed. The President has effectively waged his own war on various terrorist organizations without Congressional consent. Congress has made no formal declaration of war, yet the President continues to make unilateral life or death decisions about foreign nationals. America’s drone program, began under President Bush and expanded under President Obama, continues a dangerous expansion of Presidential power that accelerated during the Cold War. President Obama ordered the death of 525 individuals by drone strikes in Pakistan during his first term, compared to 10 in the last 4 years of the Bush administration. 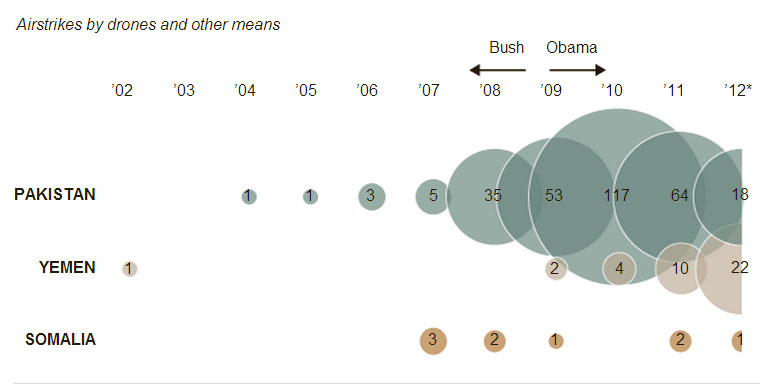