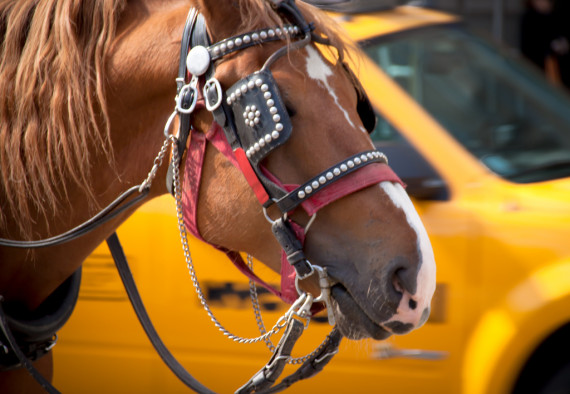 During his campaign, New York City Mayor Bill de Blasio promised to remove all horse carriages from the city within a week after taking office. Ongoing cries of cruelty have engendered debates over whether horses should be a part of Central Park culture. The statement sparked an uproar in New York City and mobilized activists on both sides of the issue. Four months later, the ban has yet to become law due to strong opposition from multiple sources.

Liam Neeson, a world-renowned actor and a strong opponent of the Mayor’s proposed ban, explained how “Horses, much like humans, are at their happiest and healthiest when working.” Although some horse activists are outraged at the supposed “cruelty” the horses face at work, this sentiment has not convinced New York’s citizens. An overwhelming 64% of New Yorkers wish to keep the horse carriages.

Many arguments for the ban—although certainly well intentioned—are neither realistic nor beneficial for the horses’ health. First, protesters against continued horse use advocate moving carriage horses to a wild habitat from the city. However, they neglect a critical truth. Horses are expensive to keep and few people can afford to own and care for them without the economic returns generated by businesses like carriage rides in Central Park. According to a Montana State University study focused on the “Unwanted Horse Issue,” annual horse costs are between $1,800 and $2,400 per year, excluding the cost of unpredictable health issues. Regardless of whether a horse lives in the city or on a farm, this cost is quickly increasing due to unstable hay and housing prices. Just since last year, hay costs in Northern California have jumped from $16 a bale to $22 a bale. Horse-lovers are unable to afford this increased price. Stacie McGrady, an owner of a Northern California horse farm, stated that these growing prices would mean “more surrenders, more abandonment and more neglect cases.” When horse ownership is discouraged, as the New York government is proposing to do now, horses lose caring homes.  The high cost combined with the incentives to decrease ownership will lead to less horse owners.

Additionally, horses that cannot be sold to private homes are sent to shelters. The more horses that are sent to shelters, especially old carriage horses, the higher the probability the horse will be euthanized prematurely due to tight budgets and increased demand for shelter resources. Enterprises where horses can generate positive returns for owners, such as the horse carriage business, provide the best care. Businesses are more likely to take a horse to the veterinarian, maintain sanitary stables, and provide proper nourishment if horses can generate cash. The horses are private business capital, and healthier horses lead to more carriage rides and greater profits.

Activists who speak against the horse carriages assail the owners’ alleged “poor” safety record. They claim that “four [horse] deaths” in the industry over the past seven years illustrate unsatisfactory caretaking. As someone with an extensive horse background who has cared for horses for several years, I can attest to the fact that four deaths out of a large pool over seven years is an exemplary record. It is difficult to avoid random horse diseases even with the best care. My own horse, Snickers, died of colic, a fatal horse ailment. Colic, the number one killer of horses, is a condition that is caused by season change, lack of water, infection and many other factors. A U.S. National Library of Medicine study stated that 52% of horses brought in for medical attention with colic had to be euthanized. Colic and other common horse ailments are responsible for many horse deaths.

While some of these deaths may not be attributable to disease, fatal injuries occur in all riding activities. For example, racehorses in California in 2010 experienced a 4% mortality risk per year from racing injuries, which far exceeds the rate of carriage deaths. Any horse owner can explain that horse ownership is inherently risky.

Proponents of horse bans also attack the quality of the New York horse stable life. However, evidence paints a different picture. The former president of the American Association of Equine Practitioners, Harry Werner, examined the carriage horse stables and wrote an article presenting a positive image of the horse stables. Emphasizing the cleanliness of stalls, he described the “ample bedding” and “adequate room” for the horses. The stalls were impeccable and veterinary, dietary, and farrier services were top quality. The horses even receive 5 weeks of vacation each year, a luxury competition and race horses never receive. At the end of the article, he recognized that the living conditions were of importance, but the physical well-being and behavior of the animals mattered most. He delivered high ratings in both areas. He closes his article with a statement that answers the worries of many activists: “In my view as an experienced equine veterinarian of 40 years — and after visiting the horses at work and at rest — all evidence points to a carriage horse industry that provides very good care for its horses.”

Activists urge New York to adopt an electric old-time car system as a replacement for horse-drawn carriages. However, this is highly unrealistic. The prototype cost $450,000 to build and, if passed, the state would buy at least 68. The Central Park Conservatory—the nonprofit organization that works with the city to manage the park— does not support adding cars to Central Park. Leaders of the organization explain that Central Park receives forty million visitors per year and “adding vehicles to the mix will make the park less safe for all of them and increase congestion.” Electric vehicles in Central Park are neither cost effective nor safe.

Horses taken from Central Park will have a bleak future. The hard, cold truth is few private owners want to pay for old and unusable horses. Horses without private buyers are cared for by the government. The government has no profit-maximizing desire to maintain happy and healthy horses. As soon as horses transfer from private to public ownership, their best defense—the ability to make money— is gone. The Bureau of Land Management (BLM) manages hundreds of thousands of unwanted horses annually. Only weeks ago, the Federal Government sold 160 horses to a Canadian slaughterhouse when their private owner had passed away. While the United States bans horse slaughter, Canada and Mexico profit off horses that are shipped to the countries to be slaughtered annually. Sadly, there has been a much bigger uproar about the treatment of horses in New York City than the treatment of horses headed to the slaughterhouses in Mexico or Canada.

The New York City horse carriages not only protect horses from becoming unwanted, they take in unwanted horses and give them top-notch care. A carriage driver named Ian McKeever, even paid $1,400 to save a skinny and abused horse named Roger from the slaughterhouse. After nine months, McKeever was able to train the pony. Roger worked 17 years in New York City, retiring as a happy, healthy and kind horse. The McKeevers even consider the horse a “family pet.” This is a far cry from the “cruelty” Mayor de Blasio attacked on the campaign race.

We must choose between two alternatives for the horses in Central Park. Mayor de Blasio’s option would send horses to overstocked shelters waiting for an adoption that may not come soon enough. The other allows healthy and happy horses to continue to generate economic growth for New York City. A ban on horse carriages in New York City would only be the beginning of a cruelty for the horses.