Studies say there is a value to homogenous friendships, but universities provide a unique place to experiment with what type of people you befriend. Students should take advantage of their time at Stanford to expand their social circles.

Growing up, I had heard that college was supposed to be transformative. The classes would be intellectually stimulating, the sports would be competitive, the parties would be exciting, and the friends would last a lifetime. I was skeptical I would find my best friends in a sea of 8,000 undergraduates from across the world, and NSO didn’t help. If you’re anything like I was the first week of Stanford, I couldn’t figure out why I chose to move so far away, where I had no family and no other friends. Two and a half years later, I can’t imagine being anywhere else; Stanford is where my best friends are.

Friends play a tremendous role in helping students adjust to and navigate residential universities academically, institutionally, emotionally, and socially. Friends are often the first point of contact others have with you, so the impressions others have of you can very much be based on your friends. Being a friend is as important as having a friend; as you age, extending friendship helps to define your self-worth. Given friendship plays an integral role in life, and in particular at Stanford, we asked the question: how do we pick our friends?

In a survey on friendship conducted by The Stanford Review, 56 respondents described the demographics of their friend group. The survey asked if the respondent’s friends shared the same academic or professional interests, socioeconomic status, political affiliation, religion, race, geographic background, relationship status, sexual preferences, and class year. Respondents could answer “not at all”, “not really”, “neutral”, “kind of”, “a lot”. For nearly all categories, students were more likely to be surrounded by friends that are similar to them, with the key exception of geographic background: 68% of respondents said that majority of their friends were “not at all” or “not really” from the same location as them.

For some of the categories, the respondents were relatively split. Regarding race, religion, major/academic interests, and professional interests, about half of students didn’t have friends that shared characteristics in these categories.

The most shared characteristic between the respondent and their friend group was class year, which is unsurprising considering the the structure of Stanford’s class and residential systems. Students also group together by political affiliation and socioeconomic status: 73% of respondents said that the majority of their friends “kind of” and “a lot” shared the same political affiliation, and 50% were mostly friends with others from the same socioeconomic status. 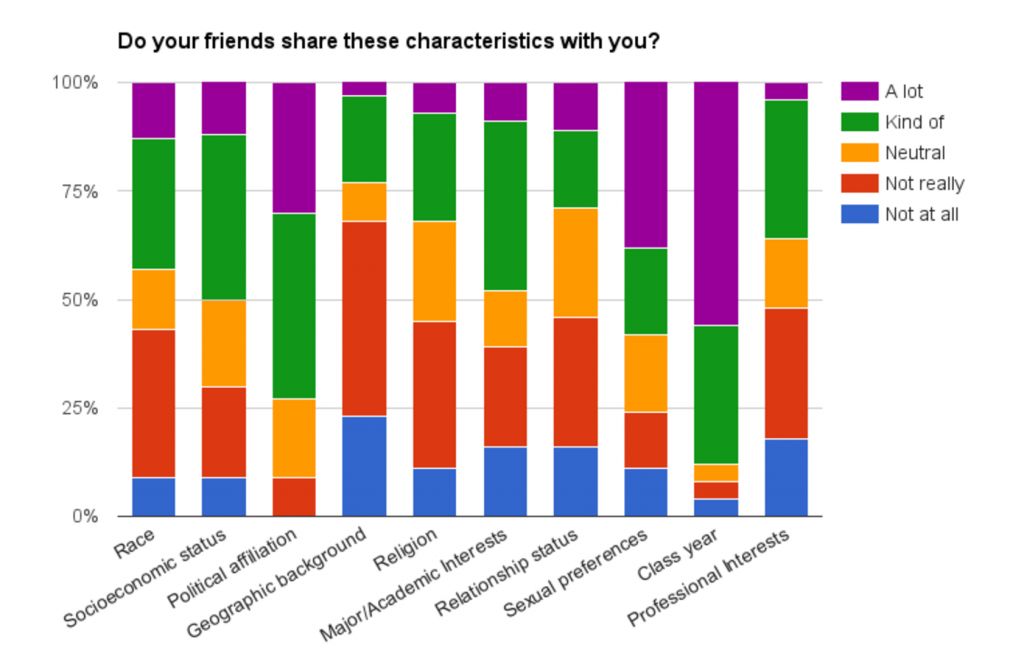 The results align with professional studies that have shown that individuals tend to form friends with people similar to themselves. Lois Verbugge at the University of Michigan looked at friendships to see how people organized themselves. The data overwhelmingly pointed towards segregation by ‘status’ – broadly defined, including profession, political affiliation, religion, age, and marital status.

But knowing the composition of our friend group is only part of the equation. Equally important is how we choose those individuals. One theory is that, in essence, we don’t. According to a study published in 2014 from University of California – Irvine, our genomes have a lot to say about the people with whom we like to spend time. Apparently, most friends are as genetically related to each other as fourth cousins, giving new meaning to the phrase that “friends are the family that you choose.” In fact, being friends with someone who perceives and copes with environments similarly to you may give you positive social benefits; the researchers posit that it is potentially so genetically beneficial to to be friends with people who have similar genes that it might even be affecting human evolutionary patterns. 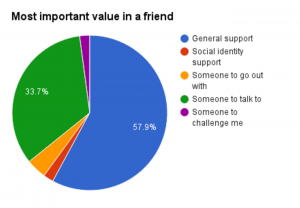 In addition to this biological explanation of grouping, there are social and emotional explanations. Researchers at the University of Puget Sound found that there are four factors that can help predict a friendship: levels of closeness (perceived connection), contact (in-person communication, emails, text messages), general support (being able to count on someone for help with a problem), and social identity support (“degree to which individuals believe that another person understands, accepts, or provides instrumental support for valued social identities”). When controlling for the first three factors, the study shows that relationships will transition from friendship to best-friendship when there is social identity support. 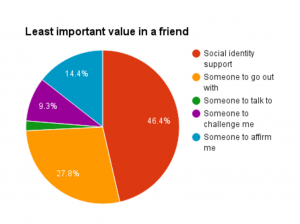 However, while it is clear that a somewhat homogeneous friend group has benefits for general support, universities are uniquely positioned to be a nurturing place for heterogeneous friendships that might push individuals developmentally in a way that homogenous friendships cannot. Because everyone attends the same school, and, ideally, the institution accepts students of different backgrounds and belief systems, friendships at the university can be used to expose students to new ideas and develop a level of empathy that might only be attained through a friendship. Coming to Stanford puts students in a unique position to increase their support system and their ability to support others that are not necessarily homogenous to them.

The data tend to explain why our friend groups are similar, but also why that’s important. Given the various pressures all students face at Stanford, it makes sense that certain shared characteristics are more likely to lead to a supportive friendship. It is without a doubt important that we have friends sharing similar experiences to us in order to provide empathy and advice as we move through the college years. However, in a university setting, we are in a unique place to define our ‘status’ quite simply: as a student. If we prioritize that over other ways of defining our identity, then it should be easier to explore friendships that would not naturally present themselves in other circumstances.

At Stanford, we should push ourselves to develop empathy and connect beyond typical political, religious, racial, and intellectual differences. Friendship is a game of luck but also one of some skill: increasing interactions, communication, and general levels of support can help foster friendships. We can be proactive in nurturing friendships as not only supportive, but also self-developing.