Stanford College Republicans (SCR) retracted their newly-designed logo on Wednesday afternoon amid clear evidence that it had been lifted directly from another business.

This afternoon, SCR announced in a Facebook post that it would be redesigning its logo after its most recent design was found to be uncannily similar to that of Rogue Bowstrings, an archery retail company. In fact, it is identical except for the logo text.

The allegations of plagiarism are particularly embarrassing for the group, since just days ago, it launched a grassroots campaign to obtain Stanford’s approval for the use of the logo. Stanford had initially refused to approve the logo for the group because of its use of the American flag. SCR’s leadership called the flag “kick-ass”, and mounted a campaign via conservative websites to pressure Stanford to green-light the logo.

Five days later, Stanford relented and approved the design after revising its policies around student groups. Today, however, SCR itself removed the logo, replacing it with a generic American flag. It assured its fans that Nine Degrees North, its graphic design team from Michigan, would be helping it to redesign the logo. It is at present unclear whether SCR were responsible for the elephant-logo choice, or Nine Degrees North.

SCR informed the Review that they found the logo online, did not realize it was the intellectual property of another company, and retracted it as soon as Rogue Bowstrings contacted them. Rogue Bowstrings thanked the College Republicans for their understanding, citing the “10’s of thousands” spent on their branding. They also independently posted that they are “proud” of their brand, joking that “we have such a great brand others desire it as their own.” 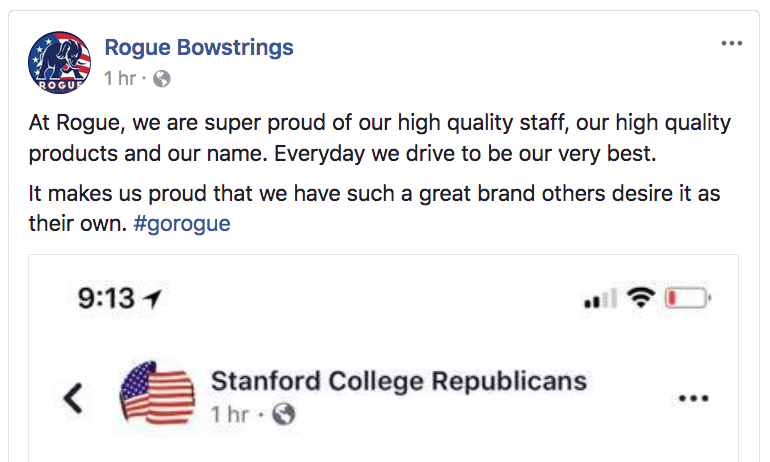 This piece was updated to reflect a response from the College Republicans.