Castro may have died, but Casa Zapata still deifies his henchman

Fidel Castro, the brutal Cuban tyrant, is dead. Casa Zapata should take this opportunity to honor Castro’s victims and show respect to our Cuban-American classmates by removing the fawning mural of his chief henchman, Ché Guevara, from their walls. Let’s show Cubans everywhere that we recognize their suffering.

The mural, called “The Last Supper of Chicano Heroes,” places Ché front and center, in the place of Jesus Christ. It praises him as someone who “fought for us,” meaning Chicano students. But as I wrote two years ago, Ché Guevara “is no hero to most Cuban-Americans, who had to escape the police state that Che was instrumental in creating.”

Ché presided over at least 1,118 summary executions, and personally enjoyed shooting victims, including children, in the back of the neck. He helped overthrow the corrupt Batista regime in Cuba, but then created the Cuban gulags. He was a doctrinaire Marxist who helped create the Castro regime, which arrests, tortures, and murders its citizens for “pre-criminal social dangerousness.”

But yet Ché is celebrated for fighting for social justice. And as the worldwide reaction to Fidel Castro’s death shows, the urge to ignore unpleasant realities and romanticize fashionable strongmen is often too strong to resist. Justin Trudeau, Prime Minister of Canada, called Fidel a “larger than life leader who served his people for almost half a century.” I suppose never holding free elections and murdering opponents is one way to “serve” the people. Vladimir Putin of Russia, that great champion of freedom, hailed Castro as “an inspiring example for all countries and peoples.” Jeremy Corbyn, leader of the British Labour Party, praised Fidel’s “heroism.” Jean-Claude Juncker, President of the European Commission, writes that “the world has lost a man who was a hero for many.”

Here in America, at least, we should know better than to lionize Fidel or Ché, both of whom sought to launch nuclear weapons at the US. But our temptation has instead been toward false balance. The New York Times breathlessly reported, “In [Fidel’s] chest beat the heart of a true rebel.” But they refused to judge, concluding with ambiguous statements like, “His legacy in Cuba and elsewhere has been a mixed record,” and “Some saw him as a ruthless despot who trampled rights and freedoms; many others hailed him as the crowds did that first night, as a revolutionary hero for the ages.” Even President Obama, the leader of the free world, did not make a single mention of Fidel’s atrocities in a 226-word statement on his passing. 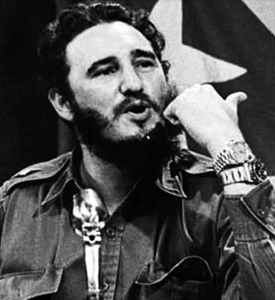 Our temptation right now is to hedge and cower, but it is time to face the truth. We can stammer about improvements in Cuba’s literacy rate (according to statistics collected by the Cuban regime), or we can recognize that in a society that censors what people can read and won’t let them leave to seek more information, free education doesn’t exist. We can praise Cuba’s healthcare system, even though it was already quite good before Castro’s reign, but this all misses the point. Marginal improvements in education and healthcare don’t compensate for murder, torture, and assassination. As Armando Valladares, who served 22 years as a political prisoner in Cuba, explains, “Stalin, Hitler and Pinochet also built schools and hospitals, and like Castro, they also tortured and assassinated opponents. They built concentration and extermination camps and eradicated all liberties, committing the worst crimes against humanity.”

If we care about human rights, we should stop excusing mass murder and torture. Praising Fidel and Ché only hands propaganda victories to a Cuban regime that continues to oppress its people on an island prison.

We should not celebrate, let alone deify, the man who trained the secret police to murder our classmates’ relatives.

Casa Zapata should take this moment to give the Cuban people the respect they deserve and remove Ché Guevara from its mural of heroes. He is a villain, and history should never absolve him.