Set to hit theaters nationwide on Friday, Sept. 28, *Won’t Back Down *is the controversial Hollywood rendition of education reform’s the “parent trigger.”

First passed two years ago in California, the parent trigger law allows parents to “take over” troubled schools once a majority of parents sign a petition. In *Won’t Back Down, *a mother (Maggie Gyllenhaal) and a teacher (Viola Davis) struggle to win over skeptical parents, a hostile teachers union, and a bureaucratic school district in their fight to turn around their failing inner-city school. Though not easy, the reform process they follow appears well established, and the film claims to be “inspired by actual events.”

“What’s going to be ironic about this movie is that it’s going to make it seem like this law exists in a lot of places. This law isn’t anywhere. This law is brand new,” said Dr. Bill Koski of Stanford Law School and the Stanford School of Education. Since California enacted the law as part of the state’s failed bid for federal funds under President Obama’s Race to the Top program, six other states have passed their own parent triggers, though Pennsylvania—where *Won’t Back Down *is set—is not one of them.

The parent trigger has been pulled twice in its short history, both times in California. In 2010, parents in Compton attempted to overhaul an elementary school, but the campaign degenerated into a bitter dispute that split the community in two, with one half demanding immediate  reform and the other distrusting the efforts aided by outside activists. The opponents alleged deception and fraud in the signature-gathering process, and when the factions took to the courts, the parent trigger petition was invalidated because its signatures were not dated.

In the same year, an elementary school in Adelanto was at the center of parent trigger’s take two, but the effort was similarly divisive and also ended up in court.

Dr. Claude Goldenberg of the Stanford School of Education views the hostile nature of parent trigger efforts as a direct consequence of the way the law is written. He believes a parent trigger turnaround would only be successful “under very unusual, perhaps impossible, conditions” and does not support the law.

“For this to be effective, parents, staff, and administration need to be able to collaborate on a unified, focused, and coherent vision of where they want to take the school. The parent trigger option is, by definition, going to be confrontational and acrimonious since parents are telling school staff they have fundamentally failed,” Dr. Goldenberg said. 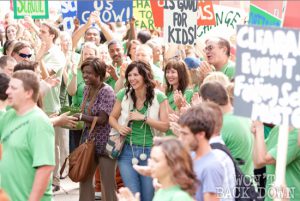 This catch-22 in which the parent trigger precludes cooperation in the very communities where it might be most necessary, worries Dr. Koski.

“There’s a real design concern. You can imagine another system where [teachers and school leaders] are accountable to the community and the community has the ability to influence decisions, but with a much more collaborative approach to reform.” he said.

Despite its messy implementation so far, the parent trigger law is popular. According to Gallup, 70 percent of voters support it. Sixty-one percent of Democrats are in favor, compared to about three-quarters of Republicans and independents. This June, the U.S. Conference of Mayors endorsed the law unanimously. More recently, Won’t Back Down was screened at both the RNC and the DNC.

“People are extremely frustrated and worried about the schools in general and often theirs in particular. I 100 percent sympathize with this frustration,” said Dr. Goldenberg. “But people are also looking for silver bullets, seemingly clean, easy-to-understand prescriptions for turning schools around…At best they’re alternatives with unknown effects, and at worst they create even more problems.”

Won’t Back Down may make the public even warmer to parent trigger laws, but it will certainly do no favors to teachers unions, who oppose the policy and play the role of chief antagonist in the movie.  Ironically, *Won’t Back Down *owes much of its pre-release media attention to pro-labor protests at the DNC’s screening. Many see this controversy as symbolic of a growing rift between teachers unions and the Democrat Party, President Obama, and many Democratic mayors. American Federation of Teachers President Randi Weingarten has already blasted Won’t Back Down as being anti-union and “egregiously misleading. ” Director Daniel Barnz responds that “the film is not anti-anything. It’s pro-children.”

Both sides seem far off the mark. If Won’t Back Down truly contains “the most blatant stereotypes and caricatures” Weingartern has “ever seen,” as she writes in her open letter, she must not watch the news very often. The ideological claptrap surrounding teachers unions is remarkable, and while *Won’t Back Down *is undeniably anti-union, at least it offers some nuance.

The same cannot be said when Gov. Jeb Bush proclaims to a national audience watching the RNC, “You can either help the politically powerful unions, or you can help the kids,” or when the striking Chicago Teachers Union publicly argues that Mayor Rham Emanuel’s push to toughen teacher evaluations reflects a larger philosophy seeking to “weaken or eliminate unions” and “privatize government functions.

Although nuanced, *Won’t Back Down *still falls prey to one cardinal sin: perpetrating the notion that our differences in opinion on how to reform mean that only some of us care about improving schools. Some of the most painfully reductive scenes in the movie frame the hesitance of a union supporter, seriously considering the overhaul, as a moral choice between bravely standing up for what is right and complacently—or even selfishly—protecting the status quo.

Won’t Back Down powerfully conveys the desperate urgency to reform public education that many Americans feel, even while remaining entertaining. Its supporters may bemoan the fact that the question “Is it anti-union?” has smothered commentary on the film’s larger themes. But perhaps there is a graver concern surrounding the movie’s release: that whatever attention it receives will misdirect the public eye from the root of the problem.