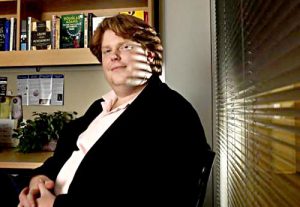 When I sat down to talk with Stanford’s Humanist Chaplain, John Figdor, he had just finished setting his email’s autoreply to inform students who were looking to set up a meeting with him that he would be busy for the next half-hour. On the Stanford campus, such attention to contact with students can be hard to find, but Figdor is committed to providing it. Like all Stanford chaplains, part of his job is to provide counseling and a sense of community to the members of his denomination, but unlike the others, his ministry is aimed towards the non-religious. He commonly deals with students who come to him with “concerns about dating and relationships, and work-life balance issues,” and he offers as much advice as he can.

Figdor explains, however, that he tries to steer more serious issues on to Counseling and Psychological Services: “While I was in divinity school becoming a humanist chaplain, I learned that some chaplains, with an absolute minimum of training, would try to help people with really intense issues, such as domestic violence or alcoholism. But I think that’s kind of irresponsible, because chaplains don’t necessarily have advanced degrees in psychology and counseling. One of the strong opinions of humanism is that you should ask the experts. So if you’re talking about psychology, you should ask a psychologist.”

His commitment to seeking the opinions of field experts in the resolution of serious problems sets him apart from other chaplains, but he also differs from them in terms of the influences that he draws from when speaking with students.

“One of the cool things about humanism,” Figdor explains, “is that we don’t have a canon: there’s no bible for humanists. Instead, we have the eastern and western literary traditions as our influences, so it’s pretty wide-ranging.”

Although it is broad, humanism does have some central tenets; humanists believe that human interests and values are of primary importance, and prefer individual thought and empirical evidence to faith, tradition, and authority. Figdor identified his strongest intellectual influences as “people like Steven Pinker, John Rawls, the eminent Harvard philosopher, obviously people like Richard Dawkins, Sam Harris and people like Christopher Hitchens, who [he] saw as a mentor in many ways.”

Yet despite humanism’s criticism of faith and the supernatural, Figdor still believes that humanists can be spiritual.

“It all depends on how you interpret this word spiritual,” he argued. Most people take it to mean “getting together to pray and focus on development of the soul,” but Figdor prefers to emphasize “Eudaimonia…the idea of human flourishing. This is the idea that people should pursue excellence in every aspect of their lives.” He therefore tends to avoid using the word spiritual due to the “supernatural baggage associated with the term.”

Figdor’s own interest in humanism was sparked when “people began to be much more interested in talking about religion and talking about how religion influences public life in this country… especially after 9/11.” After he studied philosophy at Vassar College as an undergraduate, he enrolled in the Harvard Divinity School. He “ was studying to become a young Christopher Hitchens, a scholar of religion.  But during the course of my studies [at the Divinity School], I learned that while there are tons of scholars and critics of religion, there was a real need for community organizers to start building Humanist communities.”

“Even though I enjoy those other activities, I decided to make that my secondary focus, and to make my primary focus building a community for students who are broadly non-religious- atheist, agnostic, humanist, etc.,” he added. While at Harvard, he was president of Harvard’s Humanist organization, ‘Harvard Atheists, Skeptics, and Humanists’. He also was a member of the Board of Directors of the Secular Student Alliance, and an Assistant Chaplain to Harvard’s Humanist Chaplain Greg Epstein.

Figdor’s first exposure to Stanford, the first University on the West Coast to add a humanist chaplain to its community, occurred when Atheists, Humanists, and Agnostics!, or AHA!, a Stanford student organization, invited him to speak on Darwin Day last year. The day is a celebration of the birthday of Charles Darwin, and after speaking to members of the humanist community at Stanford during that event, Figdor and five others set up a new humanist organization, the Humanist Community, dedicated to serving Stanford alumni. His work on that non-profit made him a natural choice for his new position, and in his capacity as the Humanist Chaplain he not only counsels students but also is heavily involved in organizing AHA! activities.

One of his goals in that regard is to enhance the collaboration between Stanford humanists and the greater community in this area. Prior to this year, there were only two explicitly humanist organizations in Palo Alto: the Humanist Community of Silicon Valley, which is located off-campus and tends to attract an older demographic, and AHA!, the Stanford student organization. Unfortunately, two groups have had little contact in the past.

“Historically, we haven’t had any real connection with the Humanist Community of Silicon Valley because they’re mostly…well, to be honest, they’re older… And students also have notorious difficulty getting off-campus to any event- you know, the Stanford bubble,” said AHA! President Armand Rundquist.

Figdor, however, hopes to change that.

“He really wanted to work toward building a broad coalition of humanist groups in the area,” said Rundquist. “There’s this divide between the on-campus student group and the off-campus Humanist Community of Silicon Valley and the other humanist communities in San Francisco or across the Peninsula; I think John really wanted to bring all of them in and help coordinate them.”