Stanford’s humanities core disintegrated over the past 25 years due to a conformist administration uncommitted to providing a broad liberal arts education. Now is the time for The University to invigorate and renew its humanities curriculum.

Stanford claims to provide an expansive undergraduate experience that “will remind you at every turn why you wanted a strong liberal arts education.” But Stanford’s humanities curriculum contradicts this claim. Despite having access to one of the top humanities departments in the world, Stanford students can graduate without having read a single substantial work of literature. This hardly constitutes a “strong liberal arts education”. 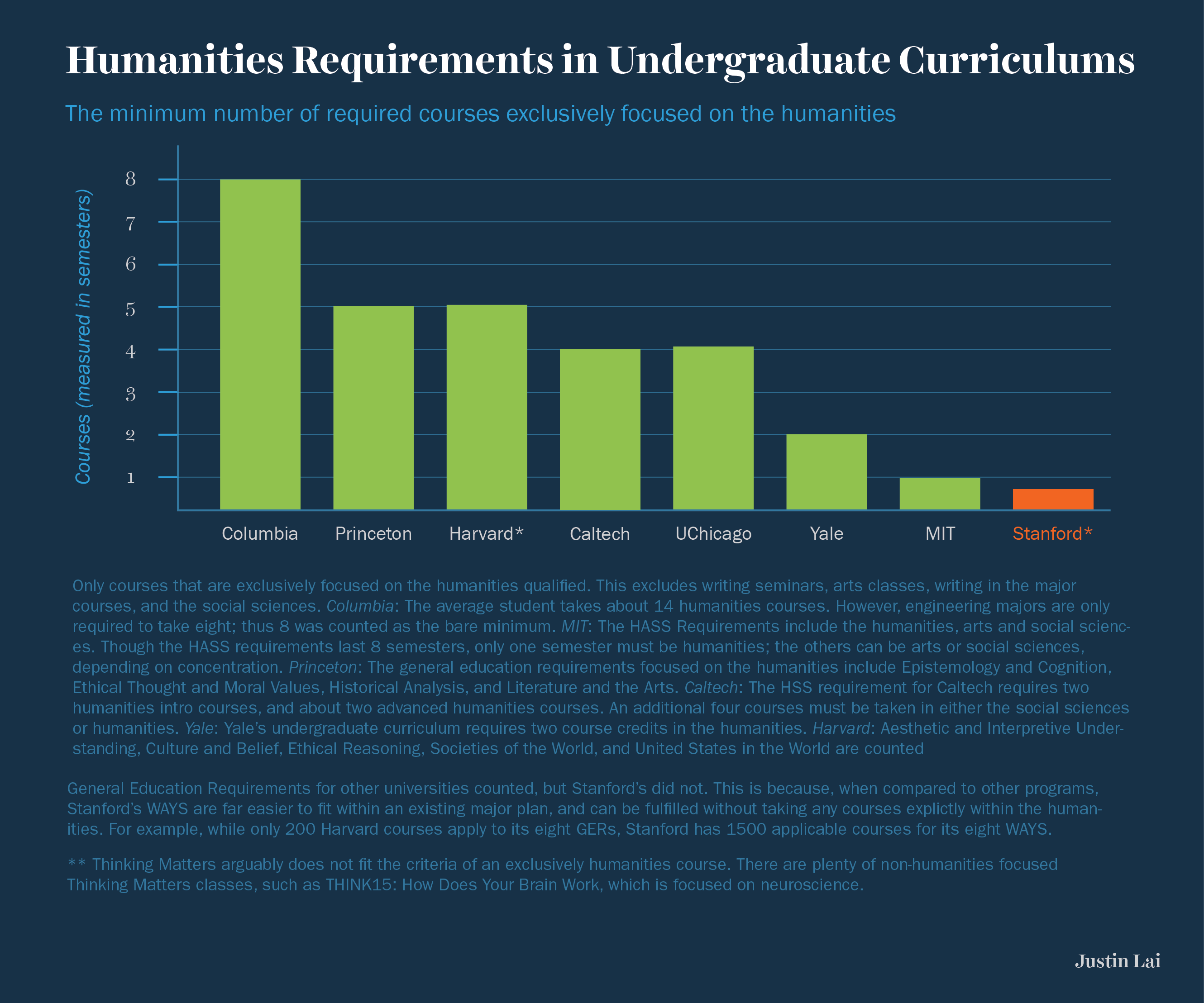 Stanford’s humanities requirements are far fewer than those of its rival institutions, and even less than schools with an explicitly technical focus such as Caltech or MIT. Thinking Matters, the latest iteration of Stanford’s humanities requirement, enrolls about 85% of freshmen, while the rest are enrolled in Structured Liberal Arts Education (SLE),  Immersion in the Arts: Living in Culture (ITALIC), Science in the Making Integrated Learning Environment (SIMILE), or Education as Self Fashioning (ESF).

Stanford used to have a humanities core. Thinking Matter’s predecessors were rigorous programs focused on the critical reading of important texts. The three-quarter Western Culture course consisted of fifteen great works. One of its successors, the three-quarter IHUM sequence, allowed for humanistic inquiry in diverse interdisciplinary tracks. Each iteration faced unique patterns of dissent and calls for change; some did not feature diverse authorship, while others had unfocused curriculums. Stanford’s reaction to such critiques reveals its lack of commitment to provide an authentic liberal arts education: the University continuously modified its curriculum to appease critics at the expense of the rigor and quality of its programs. What we are now left with is a single quarter class of hypothetically humanistic inquiry.

If Stanford is truly committed to providing a broad liberal arts education, the administration must take radical measures to stimulate the intellectual expansion that it so eagerly advertises.

The fundamental role of a liberal arts education is to broaden the intellectual horizons of the student body through exposure to new ideas, cultures, and perspectives in different disciplines. The humanities can be described as the study of how people process and document the human experience. Exposing students to the legacy and depth of the human experience is central to a liberal arts education.

It is also the university’s duty to to expand students’ intellectual horizons by supporting disciplines and vocations beyond those which students would naturally select. Only 10 to 18 percent of applicants for the Class of 2016 indicated primary interest in the humanities. Without the university’s intervention, would the rest of the student body gain any exposure to the humanities? Probably not. Forces outside the university, such as vocationalism and students’ preconceived perceptions of disciplines, direct students’ choices in courses. For example, a Stanford student seeking employment is much more likely to be familiar with the basics of Java through CS106A than the philosophical concepts taught in PHIL1. Thus, to live up to its promise to stimulate a broad liberal arts education, Stanford should counterbalance the force of vocationalism by promoting the humanities.

The History of Stanford’s Humanities Core

Following the tradition established by the University of Chicago and other east-coast private liberal arts colleges in the 1930s, Stanford established a humanities core focused on great works of the past in 1935. The result was History of Western Civilization, changed in 1969 to Western Culture. The core consisted of fifteen required texts, all focused on the evolution of European thought and philosophy throughout the ages.

Protests in the late 1980s criticized Western Culture’s authorship and eurocentricity,  demanding perspectives from those that were not “white, dead, and male”. Dissatisfaction with Western Culture culminated in a rally of 500 students and an appearance by Jesse Jackson on Jan 15, 1987. These protests destroyed Western Culture and initiated the establishment of CIV (Cultures, Ideas, and Values). CIV allowed students to select from various tracks of humanistic inquiry that introduced new diverse sociocultural perspectives.

This time, CIV was criticized for being too diverse: The courses were too disparate, the grading systems were uneven, and the tracks were unstructured. In 1997, the administration was forced back to the drawing board, launching the ill-fated IHUM (Introduction to the Humanities), a three-quarter multi-track interdisciplinary humanities sequence.

The three-quarter IHUM sequence did not immediately achieve notoriety. Professor Sepp Gumbrecht, the Albert Guérard Professor in Literature, recalls that “IHUM was quite popular at first.” Initially, Stanford only gave established, respected faculty members of the humanities department teaching positions. These chosen professors, already earning the highest incomes, were given an additional 11% income boost. Other disgruntled faculty members soon demanded the right to teach IHUM courses. Maintaining the program’s originally high standards proved to be impossible, and IHUM became well known as one of the worst experiences of Stanford freshman life. “When IHUM deteriorated, I knew there was no rescue,” said Gumbrecht.

Gumbrecht recalls an instance where IHUM’s notorious reputation superseded the experience of the course itself. While being interviewed in a *Stanford Daily *column, a senior student who had enrolled in Gumbrecht’s course stated that the worst experience of his Stanford career “was IHUM”. When asked about his favorite course, the student mentioned the name of Gumbrecht’s IHUM class.

The Faculty Senate voted in 2012 to replace IHUM with Thinking Matters, whittling three quarters of humanities down to a one quarter course. While the SLE and ESF programs are certainly rooted in the humanities, the vast majority of students enroll in Thinking Matters, and thus it deserves the most analysis. We can also disregard WAYS since over 1500 classes apply to the eight WAYS requirements; most students have little to no difficulty in fulfilling these requisites without taking a course directly rooted in the humanities. In comparison, Harvard’s eight General Education requirements can only be fulfilled by 200 carefully selected classes.

While some of Thinking Matter’s single-quarter course offerings are firmly rooted in the humanities, many lack even a single work of substantial literature or reading, and are often focused on non-humanities disciplines. For example, THINK15: How the Brain Works consists of just a single neuroscience textbook.

What Happened to the Humanities

The disintegration of the requirements does not necessarily indicate Stanford devalues the humanities. All of Stanford’s humanities programs rank among the top five in the country, and the recent construction of a humanities dorm and the support for SIMILE, ITALIC, and SLE invalidate any theories that Stanford does not adequately support the humanities department.

Conservatives suggest  that diversification and the pressure of liberal multiculturalism in general has splintered the intellectual rigor of the curriculum. But many of the administration’s decisions did not result from a push for greater socio-cultural diversity. CIV was discarded because of *too much *diversity in perspectives. Disparate texts, often not considered great works, were compared in contrived ways, compromising the rigor of the program. IHUM deteriorated due to faculty complaints concerning pay raises.

The problem, instead, is that the university has not fully committed to its duty to provide a broad liberal arts education. The administration lacks the necessary conviction to assert a clear plan that includes the humanities. Because of this lack of commitment to such a program, it has allowed criticisms to shape the curriculum at the expense of rigor and quality. The sociocultural diversity issue in itself was not the central problem; it merely exacerbated Stanford’s sensitivity to criticism and revealed the administration’s passivity.

The university prioritized perception above intellectual expansion in 1987 with the destruction of Western Culture, throughout the early 2000s with the expansion of IHUM, and again in 2012 with the establishment of Thinking Matters. Replacing Western Culture with CIV was a half-hearted reform measure that appeased critics but compromised educational quality. New multicultural tracks lacked rigor and featured awkward ties between disparate cultural perspectives. A Wall Street Journal column lampooned this contrived diversity in the syllabus of the new “Europe and the Americas” track:  “we await the lecture that interprets Marx through the work of Groucho and Harpo.” The expansion of IHUM is another example of satisfying critics while stifling intellectual expansion: the administration appeased critical professors hoping to teach a class; by doing so, the quality of IHUM courses quickly deteriorated.

Thinking Matters is the end result of this pattern of conformity. Kenneth Taylor, the Henry Waldgrave Stuart Professor of Philosophy, suggests that Thinking Matters cannot even be categorized as a continuation of a humanities curriculum: “Stanford basically has intentionally abandoned anything like a ‘core’ humanities curriculum. So it’s a mistake to think that it’s the latest in the sequence of undergraduate ‘humanities requirements’”.

It is time for the administration to revisit its commitment to providing a liberal arts education, and produce a new curriculum that reflects such an intent.

Conceptualizing a detailed plan of reform is a monumental task certainly beyond the scope of this article; it would take several academic committees and extensive research to accomplish. However, I will outline the basic fundamental characteristics of a new humanities curriculum.

The formation of a substantial humanities curriculum must fulfill four objectives. The first is to provide a rigorous curriculum strongly based in the humanities. The second is to introduce diverse sociocultural perspectives, which are necessary to understand in a world filled with ideas of all kinds. The third challenge is to create a common conversation; the curriculum should stimulate discussion of the intellectual material among the student body. The fourth and most difficult challenge is to preserve a sense of academic freedom, an ideal espoused by the Stanford motto and highly valued by its students. An education that a student personally chooses is naturally valued higher than an imposed education, and creates a more meaningful and personally significant academic environment for the student.

Robert Harrison, the Rosina Pierotti Professor in Italian Literature, has proposed a humanities core focused solely on the classics that would address all four objectives. The classical texts studied would be established works, foundational to modern thought. By providing a selection of works from various cultural and geographic contexts, addressing diversity would not be a problem. Since all students would be studying classics in one way or another with a narrower selection of classes, conversations both within and between classes would naturally materialize. Finally, the student would have the ability to choose which culture’s ancient texts to study in depth, providing academic freedom as well.

Thinking Matters only fulfills two of the four objectives, in that it achieves an adequate level of diversification in disciplines and perspectives, and that this diversification affords significant academic freedom to the student. However, it fails in the other two objectives. A single-quarter course cannot be considered rigorous enough to provide a meaningful humanities background. Though Stanford clearly intends to create a common conversation among its student body, indicated by its three books program, the fragmentation and brevity of Thinking Matters prevents any sort of basis for a sustained conversation. “It is only a matter of time before Thinking Matters needs to be revisited,” said Harrison. “All it has achieved is dismantling. Instead of invigorating and renewing the humanities, it dilutes them. Rather than read something, we now read nothing.”

Each curriculum would face its own unique set of challenges, limitations, and compromises. No plan is perfect. But that is no reason for Stanford to back down from the challenge altogether. Now is the time for the administration to revisit its current undergraduate humanities program, reaffirm its commitment to providing a liberal arts education, and invigorate the curriculum with a sense of intellectual expansion and purpose.

Thanks to Professor Robert Harrison and Professor “Sepp” Gumbrecht for insight and analysis for this article.