There is only one word that captures the essence of the Rose Bowl experience. Not just the game, but also the parade, tradition and 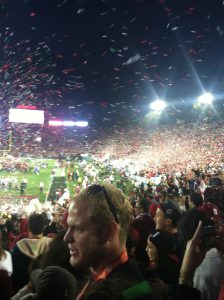 atmosphere present in that iconic stadium, fan bases clad in red and slightly darker red, and the streets of Old Pasadena on January 1st 2013. The word is epic. I am slightly ashamed to use it, as it seems lazy and vague, but I found that whenever I described my attendance at Stanford’s glorious 20-14 win over Wisconsin to family and friends, I would inevitably sum up the experience with that irksomely hackneyed word—epic.

An L.A. area native, that entire week leading up to New Years’ I had seen the annual sign of the impending Rose Bowl Game. It is subtle, but any Angeleno should be able to notice the Big Ten fans about town. They are not hard to miss. For instance, on a normal late December day this past winter break, you would see the typical L.A. mix on the beach sidewalk—a couple walking with their dog, a scantily-clad dude with huge headphones rollerblading alongside, a few skateboarding middle-schoolers with hoodies, among many others. And then you will see groups of four wearing Wrangler jeans, worn out sneakers, red flannel or Packers jerseys, and huge brown coats. Yes, the Cheeseheads are here for the big game.

I set out New Years’ Morning with my sister and freshman-year roommate a tad after 5 a.m. for Pasadena in my dad’s 2002 Mazda. We sped across four freeways to Pasadena completing the trip in unprecedented half hour, ecstatic that we would have time to sit in the parking lot and nap before the parade. Alas, 200 feet from the Rose Bowl exit we hit the masses of cars heading toward the stadium. Not for another two motionless hours were we able to pull into the parking lot. We made it to Colorado Avenue in Old Pasadena, an artsy and charming few blocks, five minutes before the famous floats and bands began their procession. For breakfast, I scarfed down a bacon-wrapped hot dog from one of the ubiquitous carts around the parade and the stadium.

The theme this year was “Oh, the Places You’ll Go!” The floats all sporting bold and pastel-like colors in honor Suess himself. My favorite was one float shaped like a volcano that spouted fumes. The bands all seemed about the same (other than the two school bands), and I quickly lost interest and headed back to the car for a much-needed nap. The Rose Bowl Parade is an event that is awesome to be able to say you attended—and is actually reasonably exciting for about half an hour. However, it is a bit difficult to stay attentive on a 37-degree morning after only four hours of sleep so I succumbed to the allure of my cushiony driver’s seat.

After the nap and parade, we tried finding the line for the bus we had paid for to take us the ten minutes from Old Pasadena to the stadium. We found it and immediately decided to forgo the bus and walk the 45 minutes to the legendary bowl. The area around the Rose Bowl is residential, so there were many vendors from the homes nearby. One of my favorite oddities was not one, not two, not three, but four different tables with the sign: “Cookies for college.” I had so many questions about their “group” that I decided not to ask any, and just bought the two cookies they were selling for a dollar. Other residents sold Rose Bowl trinkets, shirts and other memorabilia. After over a mile of walking past these vendors, the majestic stadium finally appeared.

I have probably been to about five UCLA football home games in my lifetime, so I was familiar with the sight. But, it was also completely different and new. The only thing in common was the interminable temporary parking lot that serves as a golf course during the week, and the structure itself. But the site outside of the game was like nothing I had ever experienced.

First of all, everyone was in red. From the hilarious red and white striped overalls Badger fans wore to the slightly darker shade of red (a barely discernible difference) sported by the Stanford faithful. I spent probably an hour and a half outside the stadium, and it was a combination of stress—trying to find the friends I was sitting with, who were what seemed like miles away—and blissful confusion—becoming lost in the smells of barbeque and vegan food trucks and the cacophony of radio music from the cars, tunes from the bands, group chatter, PA announcements.

At #6 in the country, ahead of unranked Wisconsin, the infamous LSJUMB was responsible for the national anthem, which junior trumpeter Ryan Volstad performed. For all the hoopla surrounding the event, though, the game itself was shockingly typical, verging on boring. Hogan and Ertz were great in the first half. The Card’s defense played very well, containing Montee Ball, college football’s all-time career leader in touchdowns, to 100 yards and 1 touchdown—wholly unspectacular numbers for a player of his caliber. On Wisconsin’s second drive, the Tree-fence had a goal line stand. Wisconsin made it interesting with two second-quarter touchdowns after that.

Halftime rolled around and the band did its usual thing, and then nothing really happened for the rest of the game other than a copious amount of punts and one more Jordan Williamson field goal. And then Usua Amanam, the defensive MVP of the game, intercepted a Curt Phillips pass near midfield as Wisconsin’s hopes ended. Like most of the Cardinal wins this somewhat bizarre yet inspiring and perpetually exciting season, the game was close—but  the defense held on for the win.

Stanford secured its first Rose Bowl victory since 1972, and offered more hope for national title contention than perhaps there has ever been on the Farm. Almost every sports news outlet has the Cardinal in the way-too-early top 10 for 2013 rankings, with some (namely, Bleacher Report) placing the Card in the top 5. Although in recent years Stanford nation has had this hope at the beginning of every season, next year it may actually be realistic. With most defensive starters returning, the defense leading the nation in sacks (with 57) will probably be even better. Of course, Stepfan Taylor and other leaders will be gone, but, as ESPN writer Kevin Gemmell stated, “It’s time to start giving them the benefit of the doubt.”

But before we look toward next year, and the Thursday night game against Oregon on November 7, and the potential No. 1 vs. No. 2 matchup against Notre Dame for the season finale, and even a Big Game back during it’s normal part in the calendar, and…who am I kidding, how can one not start looking forward to next year?

However, as you head up to the Bookstore cashier with all your Rose Bowl shirts and sweatshirts and what-not, it’s worth remembering for just a little bit this past New Years’ Day. It was typical Stanford football, it was the Granddaddy of them all, it was the 99th Rose Bowl Game, it was a beautiful sunset over the San Gabriel Mountains, it was post-game hate tweets about LJUSMB (well-worth investigating if this is the first time you are hearing about them), it was a defense of a Pac-12 Championship, and it was an extremely long experience, the likes of which you tell your great grandkids. And just to tack on one more cliché—as it best sums up Jan. 1, 2013—let me say: it was epic.