Last month, the Stanford Board of Trustees approved a 3.5% increase in tuition for the 2015-16 school year, bringing tuition from $44,184 this year up to $45,729. Stanford also announced an expansion of its financial aid program: undergraduate students with annual family incomes below $125,000 (previously $100,000) will not have to pay tuition, and families making under $65,000 (previously $60,000) will have room and board fees waived as well. These are substantial changes that affect every undergraduate on campus, and it is critical for us to understand the details and implications behind these numbers.

Given that Stanford is increasing tuition rates by significantly more than last year’s inflation rate of 1.6%, it is clear that Stanford’s real tuition revenue will increase as a result of the tuition hike. Some students on campus have raised concerns about how the university seems to be using this extra tuition money to fund its financial aid program, thus essentially requiring wealthier families to pay for the tuition of lower-income students. The following thread from the Stanford Class Confessions Facebook page (which is in no way affiliated with the author or with the Stanford Review) illustrates these students’ concerns: 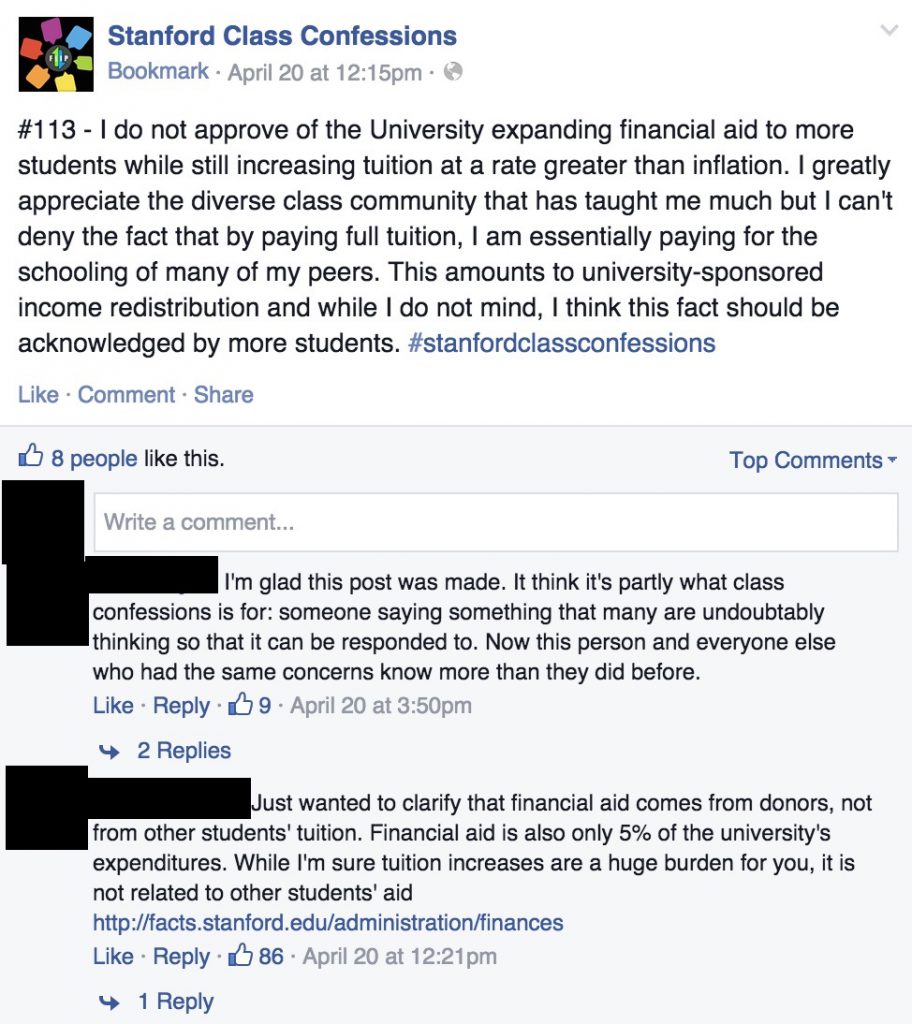 Students are not the only one voicing concerns over the idea of using tuition from wealthier students to fund financial aid programs. Kevin James, a research fellow at the American Enterprise Institute’s Center on Higher Education Reform, expressed his concern in an interview: “In general across the country, the big issue is the underlying cost of providing a college education. [Increasing financial aid] is simply shifting money around across students. It’s having some students pay more so others can pay less.”

In light of these discussions, it is critical to determine the precise role that tuition revenue plays in funding Stanford’s financial aid program. An email from Tim Warner, Vice Provost for Budget and Auxiliaries Management, sheds some light on the sources of Stanford’s financial aid budget: “Of our $130 million undergraduate financial aid program, all but about $21 million is funded with restricted gifts and endowment payout. The remainder is funded with general funds.” According to an official report released by Stanford this year, tuition revenue provides half of Stanford’s $1 billion general funds budget.

This means that approximately $10 million, or just under eight percent, of Stanford’s financial aid program is funded by tuition revenue from families who pay tuition. Therefore, there is some validity to the argument that the university is essentially redistributing wealth among its students. However, this wealth redistribution happens on such a small scale that it would be impractical to argue that it is unreasonable. Agreeing to be a taxpayer in the United States means agreeing to help fund programs that benefit the general public. These programs are a form of government-sponsored income redistribution, since tax rates are proportional to income levels. Similarly, it seems fair for families who pay tuition to help fund a small part of Stanford’s financial aid program–especially when the tremendous benefits of a socioeconomically diverse university are almost universally acknowledged.

In his email, Warner stated that Stanford is expecting a net monetary gain from the combined effect of increased tuition revenue and increased financial aid costs–though he did not provide specifics about how much revenue the university would gain. And it appears to be extremely challenging to find numbers regarding how many more students would receive full financial aid under the new program than under the current policy. Although there could be a variety of reasons behind this lack of transparency, it is clear that the university is much more comfortable touting the generosity of their new financial aid program than discussing how exactly the change will actually affect undergraduates and their families. It’s fine for the university to seek positive media attention. If they choose to do so through creating a shiny new financial aid policy, though, it is important that they help the public to be informed and to think critically about the implications of these changes given how many current and prospective students will be affected by it.