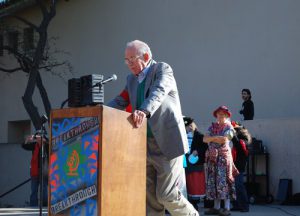 After the school-wide “Occupy the Future” event held in December, concern among students over certain Stanford officials’ explicit involvement lingers. Students and observers are split on whether the events were educational or political.

The divided opinions about the movement surfaced as a response to the University’s involvement. Included in the movement was a long list of professors writing and speaking for Occupy, promotion emails from faculty such as Dean Julie Lythcott-Haims, heavy support from the ASSU, and help with organization and planning from offices across campus.

In response to questions about the role of professors, he urged everyone to understand the “distinction between one’s role as a scientist and professor and one’s role as a concerned citizen who brings preferences and values to bear.” He considers the vocal and tangible support of Stanford professors to be a reflection of their personal political concerns separate from their responsibilities and influence as professors.

However, critics might argue that the seventeen professors whose essays were published by the Boston Review used their abilities as scientists and professors. Faculty, both essayists and speakers at teach-ins and the rally formed the backbone of the movement, furthering the perception that the University has taken a front seat role in Occupy the Future.

The Office of the President remained adamant in an email to the Stanford Review, saying that Stanford University “does not take positions on political issues.”  They did, however, specify their support for both the Occupy the Future events and a campus march by Occupy Stanford on the day of Big Game.

In a December 2011 email about the Haas Center’s involvement in Occupy the Future, Tom Schnaubelt, executive director, explained, “I view Occupy the Future as an opportunity for students to become aware of activism and community organizing as a potential pathway, to learn about, and possibly become involved in these things.” He specifically cited the University policy prohibiting campaign or lobbying activities, arguing that Occupy the Future did neither of these things.

Especially in light of this administrative support, skepticism over the impartiality of Occupy the Future’s education remains. “The discussions seemed slanted toward the liberal viewpoint” said self-identifying liberal, Kian Mehrazarin. After attending the rally and teach-in session, he was upbeat that the conversation happened, but echoed concerns of others that both sides did not see equal representation.

Even Professor Grusky commented “my own view is that much (but not all) of the Occupy the Future activities are best seen as political in nature.” He offered the thoughtful opinion that “I think it’s the responsibility of universities to make political activity possible, to support the constructive expression of competing views, but again it’s crucial to appreciate that this function differs from the function of supporting research and classroom teaching.”

While most would agree with his view that the ideal university “will be committed to analytic and empirical clarity,” critics still question whether or not the University—and its students—are fulfilling this role as well as they can.

“Most people are in favor of a discussion,” says senior Elizabeth Rasmussen, Vice President of the bipartisan Alexander Hamilton Society. “We just want to make sure it’s a fair discussion.”

Rasmussen decided not to attend the teach-ins because she did want to be tied to the larger “Occupy” banner and questioned the choice of name. She mused, however, “Maybe it’s our own fault for not having helped balance that discussion…We have a duty as those of us who do care and who do know a lot to share that knowledge and to engage others.”