Last Tuesday, Santa Clara County held its final public hearing to consider Stanford’s 2018 application for a General Use Permit (GUP), which would govern University expansion through 2035. The University proposes adding thousands of students, faculty, and workers as well as substantial building development, which it views as vital to its academic and research mission. The dastardly, evil Stanford almost got away with it…

But lo and behold, an eclectic and unexpected alliance was there, ready to stop them! Leading the charge were Stanford students from SCoPE 2035, an activist group advocating for “equitable outcomes” in Stanford’s future development. While their positions and demands are … numerous … one can really condense their platform down to a few ideas:

SCoPE gathered outside the hearing for a rally featuring all the hits in vague three-word activist slogans (“Stanford is Complicit” - “Hold Stanford Accountable”) and half-baked protest chants (“Hey hey! Ho ho! Exploitation’s got to go!”). Inside the hearing and in dozens of written comments, they were joined by a broad, Stanford-bashing coalition. Let’s meet them!

“I’ve lived here fifty years and the development has been a disaster!”

“Our space is being gobbled up! Our quality of life is suffering!”

The NIMBY (Not-In-My-Back-Yard!) is a fascinating creature, at once indebted to local developments that increase the value of their property, but opposed to continued development because it might inconvenience them personally. They are even more involved than the housing activist in urban planning policy.

The NIMBY’s home might have increased in value five-fold in a decade or two, but if he or she has to spend a half hour in traffic, you are going to hear about it!

JANET, THE LADY ANNOYED BY FIREWORKS

“Last night everybody within miles of Stanford was subjected to a barrage of significant explosions from Stanford Athletics Dept. to celebrate some game. It is utterly intolerable that something so counter to environmental and social standards should be foisted on the public.”

Barrage of significant explosions? Counter to basic social standards? Foisted on the public? I think Janet may have confused “some game” for Eurotrash!

While I deeply regret Janet’s cat cottage cataclysm, her statement perfectly demonstrates the disconnect between the idea that “Stanford is a bad neighbor” and the neighbors’ actual grievances (“my cottage, my cottage!”).

Negative impact? Has Stanford’s expansion in the last half century produced some undesirable effects? Yes. But does the Valley owe nearly all of its economic and cultural wealth to Stanford, to the point that it’s a little rich for Janet to be whining about Cardinal Football from her multi-million dollar bungalow? Yes.

Of Stanford’s 8,180 acres, over 60% are empty, most of them in the Foothills to our South (the Dish, Jasper Ridge, etc). In 2000, Stanford agreed to build nothing outside the so-called Academic Growth Boundary (read: the Foothills) until 2025! 25 years is a long time, but this time the Hillfolk demand a 99 year extension.

A 99 year property agreement? Where are we, colonial Hong Kong? For the record, Stanford has never actually proposed building in the Foothills, but the Hillfolk insist:

“I am extremely concerned that Stanford wants to add people without also adding places for ALL of them to live… I also value very highly the open space in this area and do not want to see it filled with buildings.”

Aha! I propose a compromise in which we house people in the Foothills without buildings: we’ll just convince Vice Provost Brubaker-Cole to reinstate Sigma Chi and banish them behind the Dish. At night, they’d be permitted tents for warmth and the occasional all-campus, but would need to take them down during the day so that Janet doesn’t see any signs of human habitation when she drives on 280 in her Tesla.

Stanford has for decades opened its part of the Foothills for the entire community’s enjoyment, without condition. On the contrary, Foothills Park, which is owned by the City of Palo Alto, is restricted to residents of that city. Resident of Stanford? Nope. East Palo Alto? Definitely not. It seems our friends the Lorax-wannabes (“we speak for the hills!”) have no interest in sharing with their neighbors.

Stand up for Stanford!

No matter how much discomfort the idea of Stanford being good causes many of my peers, the University does in fact have a societal mission: innovation in digital technology, research to advance human and planetary health, and educating generations of wealth-creators, creatives, and public servants, to name a few. Continuing that mission necessitates expansion.

California’s housing crisis puts us at a monumental disadvantage against peer institutions. Just ask the Chair of any department trying to hire new faculty: Assistant Professors (without tenure) who enter a Stanford housing lottery that is somehow worse than the Draw because they can’t even afford a burned-down house in Mountain View (it could be yours for $1.5 million!).

Pretending that Stanford stands to benefit from this public-policy disaster is deluded. The NIMBY cabal at ground zero of the housing crisis are no doubt giddy that they successfully tricked hundreds of students into joining their anti-growth crusade.

Therefore, I humbly propose the following name change for SCoPE 2035, to better reflect what they have regrettably become:

Does SCoPE really believe that the residents complaining about “loss of neighborhood character” want Stanford housing thousands of low-wage workers within walking distance of their gated communities? That the people complaining, incredibly, of “overburdened parks” are also deeply concerned about overburdened service workers?

Yet they stand together, breathlessly supporting full-mitigation and the County’s ludicrous conditions of approval, which, if violated, would block all development. Now, this happens to be what the NIMBYs and the public officials in their pocket actually want, but SCoPE is too focused on demonizing Stanford to see that basic truth about their new pals.

Concluding, I submit a comprehensive list of the demands Stanford now faces: 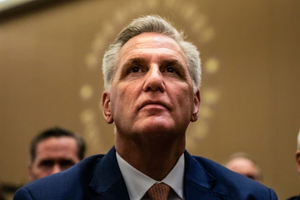 Kevin McCarthy is a Man Without a Mission

Does Academic Freedom Have a Future at Stanford?