Hearing both sides of an argument is essential to learning and forming opinions. So why does Stanford deny its students the opportunity to do so?

A study published in Econ Journal Watch in September reveals a strong left-wing tilt among top university faculties around the country, including at Stanford. Among 289 Stanford professors examined in the fields of economics, history, communications, law, and psychology, the University has a ratio of 11 registered Democratic professors to one registered Republican professor.

This proportion is only slightly better than the average ratio of 11.5 Democratic professors to one Republican professor found in the study, which examined the 40 leading universities with information available in Voter Lists Online’s Aristotledatabase.

According to the study’s authors, the faculty viewpoint diversity problem is likely to grow even more pronounced at most universities. As older professors retire, younger, more Democratic-leaning professors will presumably take over the leadership of their institutions.

The survey results did not surprise Evan Long, a Stanford junior and a conservative. “What these numbers show me is that there’s no diversity of opinion, and probably no discourse happening in the fields where it’s really important,” he said.

Jason Willick ‘15, now a staff writer for The American Interest magazine, tells me of his similar concerns. “I worry that [the academic process] won’t work as well when it comes to politically-charged research areas if all of the people involved belong to the same [political] tribe.”

Sasha Landauer, a Stanford freshman, had a different perspective. “Ideally, there would be more of a balance,” she said. “However, as long as professors are open to different viewpoints in the classroom, their views shouldn’t affect the students.”

This survey confirms the findings of a number of recent studies. One found there to be approximately three times the number of Marxists as Republicans in the social sciences. Two in five sociologists said they were less likely to hire a person they knew to be an Evangelical Christian.

Might it be time to admit that we have a problem?

Top universities like Stanford pride themselves on taking racial and gender diversity seriously. These schools do not deny their own biases, but make organizational efforts to counter them. They seek to understand how their decisions might unintentionally exclude minority groups. Stanford would benefit from giving viewpoint diversity some attention and care as well.

Academia was not always this way. In the 1960s, Klein and Langbert write in their paper, academic historians had a Democrat to Republican ratio of about 2.7 to 1. Now it is 33.5 to 1. Perhaps it is unsurprising then, that a recent paper for the American Historical Association’s news magazine found that areas of specialization within the field of history have been changing; among thespecializations that are growing rapidly are women’s and gender studies, cultural studies, environmental studies, and race and ethnic studies.

“Things began changing in the 1990s as the Greatest Generation (which had a fair number of Republicans) retired and were replaced by the Baby Boom generation (which did not),” wrote social psychologist and NYU Professor Jonathan Haidt for Heterodox Academy, the website and brainchild of a group of scholars who advocate for a more intellectually diverse academy. 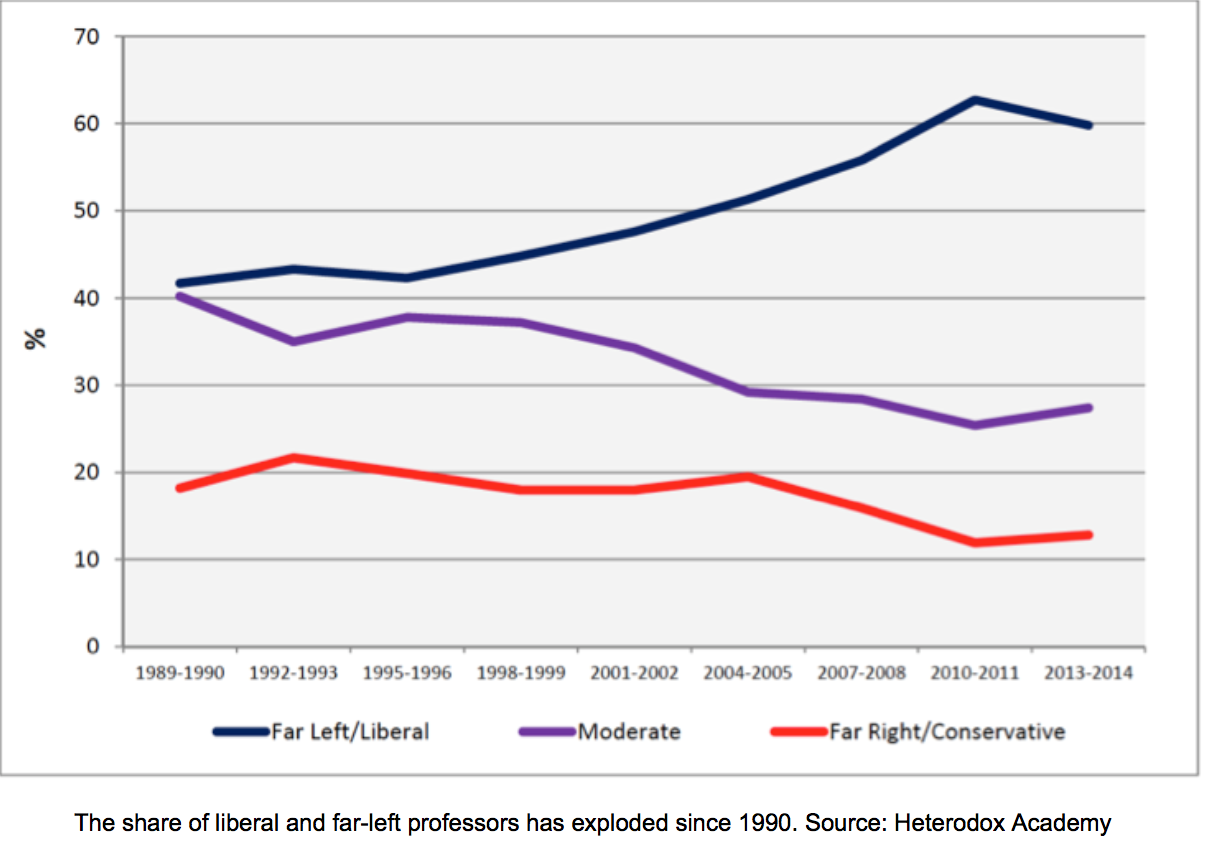 Other factors may also have contributed to the Left’s dominance in academia. Willick wrote in The American Interest that the “canon wars” of the 1980s and 1990s, which led universities to prioritize multiculturalism over the teaching of Western-civilization courses, may have also made schools unattractive to conservatives. For example, Jesse Jackson once joined 500 Stanford students chanting, “Hey hey, ho ho, Western Culture’s got to go!” as they celebrated the replacement of Stanford’s humanities core. This is the front that universities often present, unintentionally or not, to conservative students.

The political disparity in the academy is apt to damage academic work. As Haidt wrote at Heterodox Academy, a lack of ideological diversity may allow “entrenched orthodoxies” to remain unquestioned. “The academic world must have viewpoint diversity if it is to function properly and produce reliable research,” he warns.

The authors of the Econ Journal Watch study agreed. “One-sidedness, at a minimum, creates an appearance of partisanship, reducing — or more likely eliminating — the ability of universities to make balanced, nonpartisan contributions to public policy debates.”

But Klein and Langbert’s worries extend beyond the quality of academic research. “One-sided ideological orientation leads to one-sided teaching, which leads to intolerance of alternative views,” they wrote. “The ability to disagree requires practice, but neither students nor their professors practice balanced disagreement in universities because faculty meetings are increasingly held in halls of mirrors.”

A version of this article first appeared in National Review*