A comprehensive survey reveals the effects of the Stanford bubble on our political perceptions of campus.

Stanford is often perceived as a bastion of liberalism, full of left-leaning students, student protests, and activist movements; indeed, the university is famously characterised as a “liberal bubble”, politically far to the left of the rest of the US. However, this perception creates two issues. First, it is unclear whether such a characterisation is true. Lots of Stanford students are not particularly active vis-à-vis student politics; those that are, I have anecdotally found, often have on-campus political beliefs that misalign with their national partisan stances, such as a Republican friend who backed divestment. Second, such a perception can become self-enforcing. The result would be a crowding-out of political discourse, where people fail to voice their own non-consensus voices for fear of being ostracised. As a consequence, there would be a lack of meaningful political debate.

Either of these results would have serious repercussions for student politics. It is thus especially important to discover an empirically-validated answer about Stanford’s political consensus, rather than one warranted merely by intuition, small-sized anecdotal datasets, or the perception that one’s own viewpoints are marginalised and under-discussed. For that reason, and also out of genuine curiosity, The Stanford**Review contacted the Stanford student body last week to see where it stood politically. As it turns out, Stanford makes people more liberal both on foreign policy and socially, and the Stanford bubble has a very real effect on people’s perceptions: students think campus is significantly more liberal on fiscal and social issues than it actually is.

Our survey asked covered four areas. We asked first how much students cared about politics; second, how liberal they were on economic, social and foreign policy; third, how liberal they used to be before Stanford; and fourth, how liberal they thought the average Stanford student was. Four things should be noted before we move on. First, we asked people where on a spectrum of 1-5 they placed themselves, where they used to place themselves, and where they would place the average student. Second, we used the terms ‘dove’ and ‘hawk’ for foreign policy, which for the sake of rhetorical convenience I have equated here with ‘liberal’ and ‘conservative’; this does not mean we do not appreciate the differences between these terms, and the ways in which people of different political leanings often cross the aisle on the issue of foreign affairs. Third, we clarified, as simply as possible, definitions of liberals, conservatives, hawks and doves in each policy domain to ensure responses were consistent. Fourth, from here on, 1 means liberal or dove; 5 means conservative or hawk. 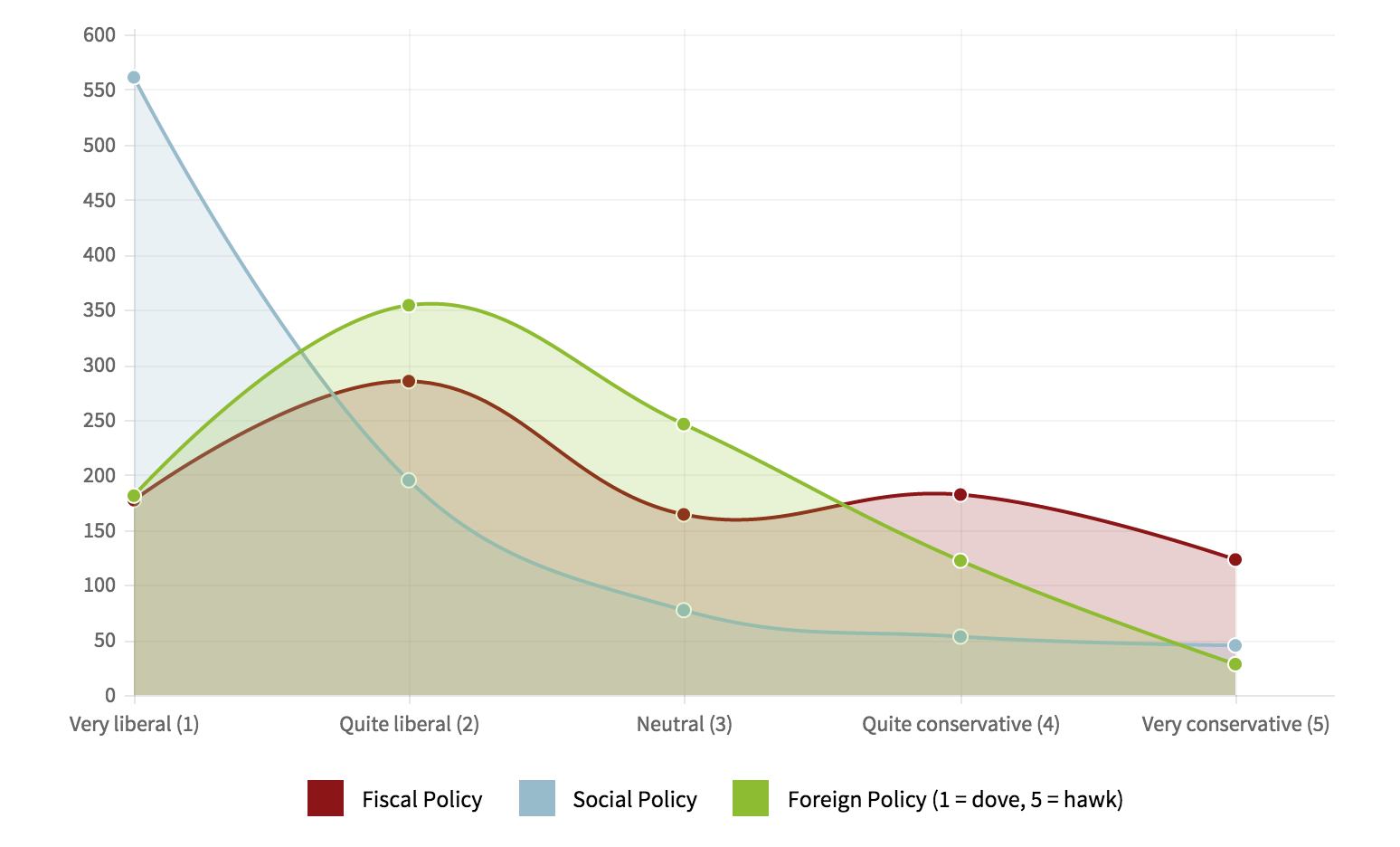 The average Stanford student, unsurprisingly, is pretty liberal*, although not exceptionally so: students averaged 2.8 on fiscal policy, 1.7 on social issues and 2.4 on foreign affairs. They also care moderately about politics, averaging 3.5 with a relatively small standard deviation of 1.1.  There were at least two more interesting observations from the survey data. First, students become more liberal on at least some issues during their time at Stanford: the pre-Stanford admit, assuming students can remember their past viewpoints accurately, scored 2.8 on fiscal, 2.0 on social and 2.5 on foreign policy, two of which (social and foreign policy) turn out to be statistically significant results. While something – perhaps Silicon Valley, the Economics faculty, or the Hoover Institution – seems to stop students from meaningfully swinging to the economic left, students become more socially liberal upon coming to Stanford. Second, there is a gap between the actual average political view of Stanford students and the perceived average. Specifically, while the average student scored 2.8 on fiscal, 1.7 on social and 2.4 on foreign policy, the perceived averages were 2.6, 1.6 and 2.4 respectively; the differences between perception and reality are statistically significant for both fiscal and social policy.

At this point, it is worth exploring the concept of statistical significance on which I have touched in more depth. Significance tests are designed to assess whether random chance could have produced the gaps between political past and present, or perception and reality. To do this, we first assume that the gaps were indeed random. For example, we might assume the following statement: “Students have not changed their fiscal/social/foreign policy beliefs since starting at Stanford.” Having made this assumption, we then calculate the likelihood that we would have seen the results we got purely by chance. Sometimes, this likelihood is quite high; indeed, if it is true that Stanford students have not changed their fiscal stance since arriving at the university, there is a 26% chance that we would see the same or more extreme results than we did. The same applies to the difference between perception and reality when it comes to students’ foreign policy; there is a 20% chance we would have seen a similar or even greater disparity, even if there is no actual difference in individuals’ minds. (As a result, these two statistics are insignificant, since the results we observed could have been a result of random chance.)

Four key results, however, are statistically significant. First, on perception-reality gaps, both fiscal and social policy differences – i.e. the difference between where Stanford students think the average student stands, and where the average student actually stands – are very statistically significant. This suggests that perceptions of a ‘liberal bubble’, while accurate, are less true than one might assume. Second, students almost certainly change their viewpoints upon arriving at Stanford; the shift in foreign policy is significant enough to be unlikely to be the result of chance, while the shift in social policy is significant at pretty much every level (i.e. extremely unlikely to be the result of chance). To be clear: the likelihood that we would have seen these results, if it were true that students have not changed on social policy since they arrived at Stanford, is 0.000004%. This probability is only slightly higher than the chance that you will die from the ignition or melting of your pajamas in the coming year.

What should we take away from these results? The data on how attitudes shift during our time on campus, while significant, would benefit from comparison with other universities, to establish whether Stanford uniquely liberalises people or whether the liberal phenomenon is one more generalisable to US college campuses. Yet despite this lack of comparative evidence, we should be cognisant of the natural biases students exhibit towards campus’ centre of political loudness. The Stanford bubble is very real, and it is plausible that recent polarised discourse on issues like divestment has had a disproportionate impact on our perception of students’ political leanings. These hard statistics indicate a reality where students think people are more liberal than they are, and adjust their comments accordingly. If nothing else, these results should prompt conservatives not to assume that everyone on campus will immediately disagree with them.

A Postscript: Was Our Survey Biased?

It is obviously worth assessing the methodology of any survey of this nature to ensure that the sample was representative of the general student population, and thus that the results this article has outlined are worth paying attention to. The sample size was 931, or 13% of the undergraduate population. In terms of region and class, the sample was fairly representative. The survey was completed by 288 freshmen, 233 sophomores, 213 juniors, 172 seniors, 13 co-terms, 6 grads, two staff members, one alum, one postdoc and one high school student (!), plus one person who chose to enter complaints rather than their class into the relevant field; the geographic profile of the sample indicated no particular skews towards certain campus locations (if, for some odd reason, it turned out that Oak Creek residents were diehard libertarians and Escondido was crammed full of Republicans).

One complaint we had was that only ideologically-charged people would bother to click through to the survey in the first place, thus risking selection bias. While this is plausible, there was a broad spread in terms of respondents’ interest in politics (average 3.5, with standard deviation 1.1); even if the average respondent was more politically-engaged than most people on campus, it is unclear that bias in a conservative or liberal direction from any individual student would not cancel out when nearly 1,000 data points were aggregated.

Another possible methodological issue is the question posed in our survey email: “Are most Stanford students truly liberal?” Some argue that this wording primed students into thinking Stanford was liberal. Such priming, they claimed, meant people would doubt their campus’ liberality, or we would make people think that campus really was liberal, and thus answer more enthusiastically that Stanford students were left wing. However, all data collection in the context of a university involves a tradeoff between unbiased data and meaningful samples. It was for this reason that we also didn’t require a SUID login; fraud was unlikely to be a serious issue, but a login barrier that caused many people not to bother responding was. Second, this tradeoff was particularly easy to make here, given that most Stanford students already think campus is liberal, so priming was unlikely to have any major change from the status quo. If we in fact primed respondents to think Stanford students are less liberal, our results are actually less significant than they should be; they would never point in the opposite direction, however. Thus, the survey results can be considered relatively representative of Stanford’s undergraduate population.

Finally, it was suggested that our descriptions of what it means to be ‘liberal’, ‘conservative’, ‘dovish’ or ‘hawkish’ were biased or inaccurate, and caused people to be confused or answer in ways that were not true to their own beliefs. One self-professed “social scientist” claimed that ‘fiscally conservative’ means “increasing wealth for the wealthy even at the expense of public good” (quoted verbatim), which seems implausible. It is obviously very difficult to sum up centuries of layered ideological belief in three sentences, but nonetheless there seems nothing controversial to us about saying that fiscal conservatives prefer lower taxes, spending and regulation; social liberals support gay marriage, abortion rights and euthanasia; and foreign policy hawks stand for more intervention and a stronger US foreign presence than doves.