The news is saturated with stories and opinions on guns, and the attention on the issue is heightened with this past year’s dramatic 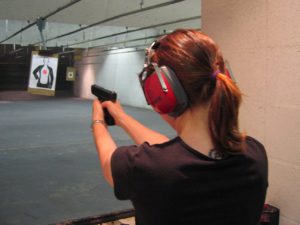 shootings in Aurora and Newtown. Understandably, the response to these horrors involves great emotion. However, in our dialogue about violence and gun ownership, we need to set aside our fears and biases and look at where the facts lead us.

Here in the Bay Area, the general response to gun ownership is an automatic “no,” and the Stanford campus is no exception. Our campus sees minimal violence and our main exposure to firearms is through the news, where killings are stories rather than the cases with peaceful endings.

This anti-gun bias is reflected in campus policy and state law. On its website, Stanford University Department of Public Safety (SUDPS) states that “all [firearms] are prohibited on Stanford Campus … except for sworn police officers,” and California has mandated absolute firearm bans on all college campuses. These policies assume that guns are fundamentally harmful. Remembering that a weapon is simply a powerful tool that can be used for self-defense as well as for harm, we need to reconsider Stanford’s “Gun-Free Zone” policy.

Gun-Free Zones: A monopoly of force

Absolute bans are ineffective, as criminals carry weapons regardless of their legality. Worse, Gun-Free Zones are uniquely attractive targets, as a monopoly of force is in the hands of whoever is willing to break the law, and police response is often too little and too late.

When Seung-Hui Cho shot his first two victims at Virginia Tech in 2007, the police unsuccessfully searched for the shooter for two hours. Cho remained in public spaces on campus for that entire time and even went to the post office to mail writings and recordings to NBC News. He then walked to a building of lecture halls at the opposite end of campus, chained the three main entrance doors shut, and killed 30 people in a second attack lasting roughly 10 minutes.

The rampage ended with Cho’s suicide. With over 200 rounds left, “he was well prepared to continue,” said State Police Superintendent William Flaherty. Unarmed, the victims had no hope but to make barricades and wait for the police to arrive, which happened well after the massacre was over.

The shootings at Columbine and Sandy Hook also ended in the perpetrators’ suicide, not police intervention. According to a U.S. Secret Service study into 37 school shootings, “Over half of the attacks were resolved or ended before law enforcement responded to the scene. In these cases, the attacker was stopped by faculty or fellow students, decided to stop shooting on his own, or killed himself.”

It is wrong to disarm an individual when effective protection cannot be provided in compensation, and relying on police officers and security guards has proven to be insufficient. When targets of violence, people have the right to options beyond waiting for help to come.

The right tool for the job

It is generally agreed that self-defense is a valid response to violence. However, when faced with an armed attacker in any situation, fighting back with nothing but your fists is the worst option. Victims need a tool that can level the playing field against all sorts of attackers.

According to a 1997 study of National Crime Victimization Survey data by PhD criminologist Gary Kleck, “robbery and assault victims who used a gun to resist were less likely to be attacked or to suffer an injury than those who did not resist at all or those who used any other methods of self-protection.” The probability of serious injury to a female victim is 2.5 times greater when no resistance is offered and 4 times greater when resistance is offered without a gun. The same study showed similar trends for male victims, though the magnitude of the statistics was diminished.

As a 5’ 3” girl, I am going to need a better tool than my fists if I get grabbed one night on the way home from my physics lab. Some friends of mine carry mace or Tasers for this very reason. While they are better tools than wrestling, they can be ineffective and even counterproductive. Pepper spray can rebound into its user’s eyes to disable his own along with those of his assailant; one-use only, Tasers are ineffective against more than one assailant and don’t work through thick clothing; and both have a very limited range.

With the limitations of other options in mind, a concealed handgun is a much more effective tool for self-defense. Along with overcoming the technical weaknesses of pepper spray and Tasers, guns pose a much greater deterrent to criminals. Many incidents involving a victim with a gun end without a single shot. When someone draws a concealed gun in self-defense, the criminal simply retreats 55.5% of the time, according to Kleck.

Before discussing concealed carry permits, it is crucial that I am clear on what they are and, more importantly, what they are not. Concealed carry permit (CCP) holders are not vigilantes with the duty to protect; in fact, it is strictly against laws and their training. There are consequences for acting unless they themselves are in immediate danger. Extending to campuses, the right to carry would simply allow CCP holders the same abilities and responsibilities they have in most other places.

While faculty, staff, and students deserve the same rights to self-defense in their place of work and study as others have, it is an understandable concern that allowing concealed guns would lead to more accidents and crime. Fortunately, this concern has not been realized.

After a combined total of one hundred semesters, none of the twelve colleges across the country–Colorado State University, Blue Ridge Community College in Virginia, and ten public colleges spanning 30 campus in Utah–that allow licensed individuals to carry on campus has seen a single incident of gun theft, accident, or violence, including threats and suicides. In addition, all Utah educators have been able to carry concealed weapons to work for the past 12 years, in which there have been no accidents or shootings in the schools.

CCP holders are statistically a very law-abiding group. According to each state’s Department of Public Safety, .007% of Florida CCPs over the last 25 years and .005% of North Carolina CCPs over the last five years were revoked due to a firearm-related crime. The felony rate of CCP holders in North Carolina is .017%, more than 20 times less than the national rate of .35%.

Not only are people who carry concealed weapons less likely to commit crimes, they can also prevent and stop them from happening.

In a mass-shooting, the perpetrator is looking to have complete power. “They’re the puppet master,” said Dr. Mary Ellen O’Toole, a retired FBI profiler. “They’ve got the control, the power, the weapons.” If potential targets are armed, they are far less tantalizing. The Aurora shooter had a choice of seven movie theaters within 20 minutes of his home. The one he ultimately chose wasn’t the closest but rather the only one that that banned concealed handguns. Holmes chose the theater in which his victims were most vulnerable.

In isolated attacks when the attacker’s motive is a more tangible gain–a mugging, for instance–the possibility of an armed target will cause the attacker to rethink. A wallet is not worth the risk of being shot.

Beyond preventing these crimes from happening in the first place, there are countless examples of CCP holders ending attacks early and widening the timeframe for escape and police response. Here just a few examples of mass-murders ending early due to armed victims: in 2007, a shooter was stopped by a CCP holder in a Colorado church after killing two people; in April 2012, a knifing spree in a Salt Lake City mall was stopped by a CCP holder when he drew his gun and told the attacker to drop his weapon; and just a few weeks ago in early December, a shooter at a Clackamas mall stopped his spree and killed himself when he saw a 22-year-old CCP holder pull his own gun. Stories of isolated self-defense from the past month alone include: an Ohio gas station clerk shooting a robber; an AutoZone employee scaring off a robber with a gun; and a pastor pulling a gun on a burglar who broke into his church.

Violence elicits particularly strong fears and emotions. When discussing the role of guns in our society, we need to rein in those fears and emotions, base our decisions on facts and statistics, and remember that guns are tools that can save lives, too.