Imagine a siren wailing.  You have 15 seconds to gather your loved ones and dash to the nearest bomb shelter.  15 seconds, this is all the warning you have to evade imminent danger.  15 seconds—anytime, anywhere, the countdown could commence. Can life go on in this manner, in constant mortal fear for yourself and for your loved ones? 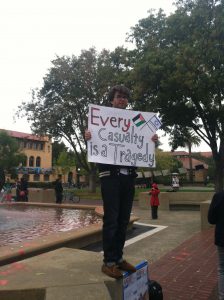 This scenario is all too familiar to many Israelis.  12,800 rockets have rained down on Israeli civilians from Gaza since 2001.  These rockets, aimed at civilian centers, disrupt daily life and threaten nearly 80% (5.5 million) of the Israeli population.  764 rockets were fired by Hamas in 2012 alone preceding the recent escalation.  933 rockets have been launched since November 14th.

What is a nation to do when its citizens cannot sleep soundly at night, when its populace is constantly in the crosshairs of an organization whose charter calls for its demise and for mass carnage?  Even after the cease fire agreement last week, rockets continued to rain down on Israeli civilians; yet, the world seems to believe that Israel should continue to absorb the fire and turn a blind eye to this constant threat.

Israel has responded with tremendous restraint and has shown a consistently high regard for human life.  Israel sends leaflets and text messages warning Gazans to evacuate areas before conducting a surgical strike.  In addition, the acceptable ethical civilian to combatant ratio for the United States military is 35 civilians to 1 combatant in order to engage in an operation with possible civilian casualties.  For the Israeli army, it is only permissible to do so if the projected ratio is 2 civilians to 1 combatant.  Israeli hospitals accept injured Palestinians, and treat them alongside Israelis.  For Israel, preserving human life supersedes any differences.

Israel initiated Operation Pillar of Defense for purposes of self-defense in order to remove a threat to its population.  Just as any other country, Israel has an obligation to protect its citizenry.   However, Israel tries to prioritize preserving human life while strategically striking at Hamas.  Conversely, Hamas uses Israel’s high ethical standard to promote its own interests.  The organization purposefully targets Israeli civilians, and indiscriminately fires rockets into Israeli population centers.  Knowing that the Israeli army will strive to avoid civilian fatalities on both sides, Hamas launches missiles, stashes weapons, and creates headquarters in schools, apartments, hospitals, homes, and other locations heavily populated by civilians.  If civilian casualties are still incurred after precautionary measures are taken to evacuate target locations, Hamas takes the opportunity to portray Israel as a belligerent demonic entity that targets innocents.  In this manner, Israel’s strides to avoid fatalities are turned on their head in order to promote an anti-Israel ideology.

Israel is not occupying the Gaza Strip.  Israel unilaterally withdrew from Gaza in 2005.  8500 Jewish Israelis were removed from their homes.  This action was taken to signal intent to overcome the impasse on peace, and to progress toward a two state solution.  Israel only asked that the violence cease and that negotiation take place.  In response, Hamas amplified its efforts to wage war against Israel. The organization capitalized on the opportunity to smuggle weapons into Gaza, and redoubled its campaign of guerrilla warfare.
Israel has taken other measures to protect its people that have been misconstrued and taken out of context.  In 2002 in the midst of the second Intifada, 25,700 terrorist attacks including 147 suicide bombings in pizza parlors, ice cream shops and buses claimed over 1,084 Israeli civilian lives.  The Israeli government had no choice but to protect its people by building a security fence.  Israel constructed a barrier of 97% fence and 3% wall in areas where snipers can fire on Israeli homes and roadways.  One may ask then was the wall effective?  Suicide bombings have fallen by 99% since the wall’s construction.  The majority are stopped at checkpoints before they can enter, and unfortunately sometimes blow themselves up there.  In no way was the security fence erected to separate 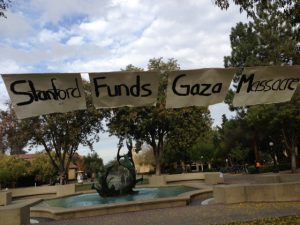 Palestinians from Israelis due to notions of superiority and prejudice. The inconvenience the security fence and checkpoints presents to travelers undoubtedly saves lives.

Though I do not claim to have an ideal antidote or remedy to alleviate the region from conflict and strife, I do know that running a positive campaign that emphasizes commonalities and strives to work through problems is infinitely more likely to lead to peace than vilifying one side.  An effort has been put forth to divest from Israel.  This effectively pins blame on one entity (and let me emphasize that Palestinians are not to blame, but Hamas is).  Lambasting and targeting apocryphal allegations against companies that collaborate with Israel is a common strategy employed by the national BDS (Boycott, Divest, Sanction) movement.  BDS tactics are divisive, unproductive, and unjust.  Ronnie Kasrils, a leading BDS advocate, stated at an Israel Apartheid week that “BDS represents three words that will help bring about the defeat of Zionist Israel.”  The campaign exacerbates and perpetuates misguided feelings of animosity.

We should place our trust in leaders who want the best outcomes for both sides.  Hamas calls for the destruction of Israel, as Ahmed Jabari, Hamas military leader said in 2010. “As long as the Zionists occupy” any land in the region, “only death or exile awaits them.”  This sentiment is codified in its charter which states that “Israel will exist and continue to exist until Islam will obliterate it, just as it obliterated others before it,” and expressed through its persistent attacks against it.  Hamas is not a partner for peace.

To quote the timeless aphorism, people are entitled to their own opinions, but not their own facts. Context is crucial.  Misconceptions and skewed narratives result from neglecting context and distorting fact. I stand with promoters of healing and collaboration.  I stand with pursuers of peace and security.  I stand with those who value human life.  For these reasons, I stand with Israel.