We write in response to a previous article in the Review entitled “Why Stanford protestors are wrong about India’s citizenship bill” by Neelay Trivedi ’23. We’d encourage you to read that article if you haven’t already. The article contains several logical and factual inconsistencies and lacks context, and we attempt to lay out these criticisms here.

The Citizenship Amendment Act (CAA) allows all Hindu, Sikh, Buddhist, Jain, Parsi or Christian immigrants from Afghanistan, Bangladesh or Pakistan who entered India before December 31, 2014 to be no longer considered illegal migrants by Indian authorities and expedites their citizenship process.

A core criticism of the CAA is that it excludes Muslims who have faced religious persecution. Trivedi responds by suggesting that the CAA does not affect the existing citizenship process for Muslims. Yet the existing process already heavily favors CAA-covered immigrants, such as the expedited granting of a long-term visa, a common prerequisite for citizenship.

While illegal CAA-protected immigrants have been granted amnesty through the CAA, illegal Muslim immigrants will retain their illegal status, denying them any legal pathway to citizenship whatsoever. Thus, while Trivedi is technically correct that the CAA “does nothing to limit or modify” the existing citizenship pathway, that process is hardly a viable option for Muslims.

In response, Trivedi states the difficulty of identifying Muslims who have “genuinely faced religious persecution.” However, there is no reason this difficulty would only apply to Muslims. A member of India’s ruling political party even recently admitted that “[o]ne cannot prove religious persecution” for CAA-covered immigrants and that the government would need to devise “in-house processes” instead (such as self-declaration of persecution).

Trivedi also claims that religious minorities such as Ahmadiyyas are “outside the scope of the CAA” because of a “legal precedent” set by a 1970 Kerala High Court decision that allowed Ahmadiyyas the right to call themselves Muslims. However, nothing here excludes the CAA drafters from adding the word “Ahmadiyya” (or any group, for that matter) to it. It is a cruel irony that Trivedi utilizes the very case upholding Ahmadiyyas’ religious freedoms in his attempt to justify not recognizing the religious persecution of Ahmadiyyas under the CAA.

Given these facts, it is not clear why Trivedi insists that he “admire[s] India’s secular tradition” while treating two religious groups so differently. In order to make logical sense, such an argument has to accept a preference of non-Muslim over Muslim immigrants, a violation of that very tradition.

Further, Trivedi does not consider the CAA in the context of the National Registry of Citizens (NRC), a proposed register of all citizens in India. The state of Assam’s recent statewide NRC shows the dangers of a nationwide implementation. In the absence of proper documentation for many existing citizens, both Hindus and Muslims (even soldiers and elected politicians) were left off the list and faced the danger of being extradited to detention centers. However, the CAA shields non-Muslim religious groups from this fate but leaves authorities carte blanche to pursue Muslims, effectively laying the groundwork for Muslim-only detention camps.

The link between the CAA and a nationwide NRC is clear and unmistakable, given Union Home Minister Amit Shah’s own statements. Mr. Shah’s ministry is responsible for handling citizenship affairs nationwide.

First we will pass the Citizenship Amendment bill and ensure that all the refugees from the neighbouring nations get the Indian citizenship. After that NRC will be made and we will detect and deport every infiltrator from our motherland. pic.twitter.com/oB2SlBaQ0j 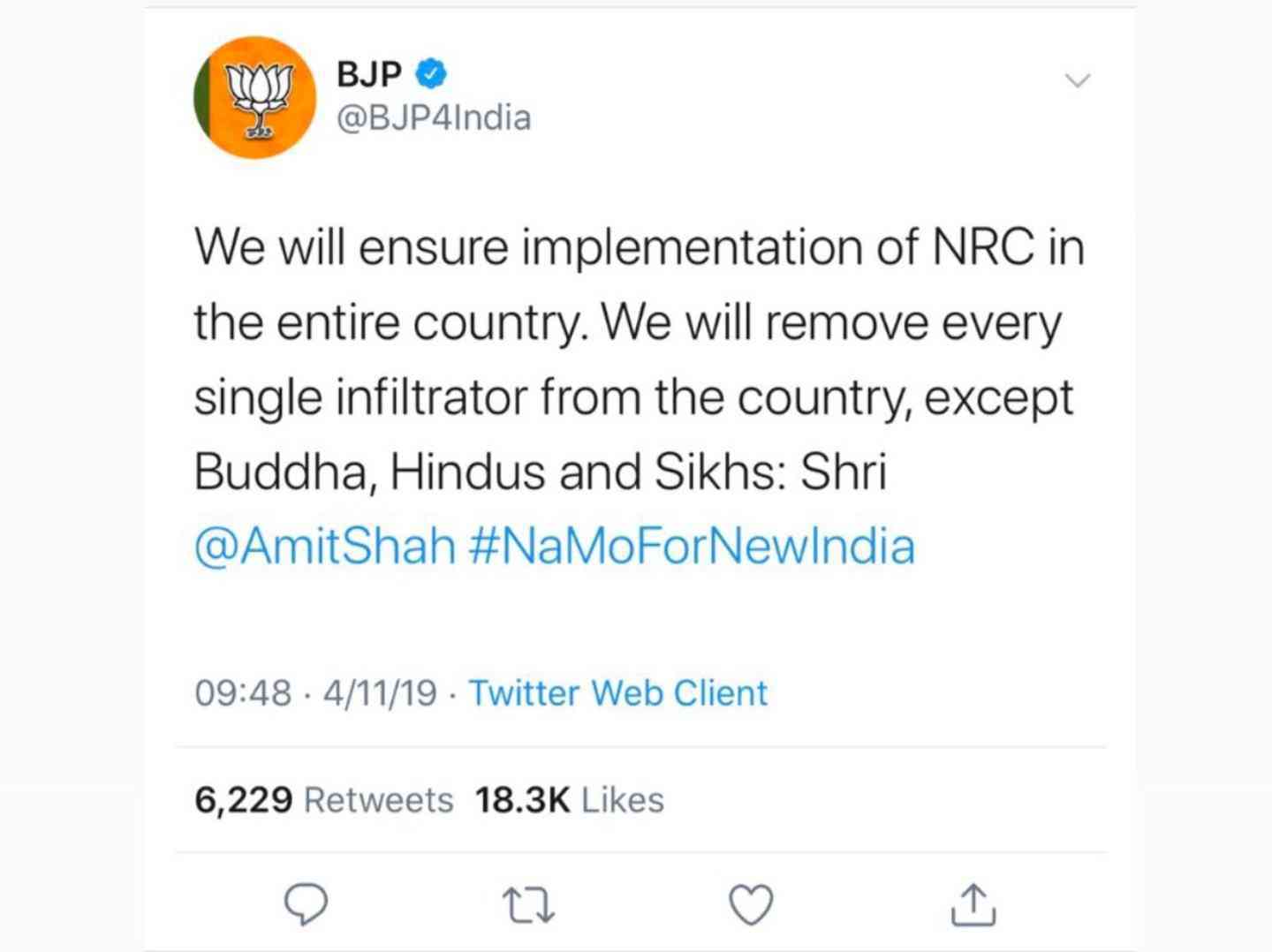 Here, we must assert that the CAA does not simply govern entry into India; it allows arbitrarily rigorous standards for proving the existing citizenship of members of non-protected groups.

Many land records in India are missing. Just 62% of Indians under five have birth certificates and 2% of Indians pay income taxes. Nearly every Indian has an Aadhaar biometric identification card and a voter ID card, but the government has disqualified them as adequate proof for the NRC.

At the same time, the government and Mr. Shah’s ministry have issued contradictory statements regarding the standard of proof they would require. It is a Kafkaesque irony that a law ostensibly brought in the interest of national security has greatly exacerbated uncertainty for millions of its own citizens.

Trivedi claims that India has “20 million illegal Muslim migrants,” providing no source for this claim. The closest one we could find is a government statement referring to “20 million illegal Bangladeshi migrants” -- from all religions. He then claims that most Muslim immigrants have entered India due to “economic and political reasons” rather than religious persecution, but then confusingly cites an unrelated article about people falsifying documents in the Assam NRC.

These factual inaccuracies matter because they help skew the facts to favor a simplified narrative of Muslims opportunistically entering India. Such a narrative also omits any mention of other persecuted refugees equally deserving of India’s attention, such as the scores of Sri Lankan Tamils and Burmese Rohingya fleeing military abuses.

Ultimately, Trivedi says it is “disappointing that the campus narrative has glossed over these horrific details [of religious persecution].” To us, it is equally disappointing how his article presents a myopic focus on certain injustices while giving a perfunctory treatment to a nuanced and layered issue already affecting millions of people. And it is further disappointing that the Review has not fact-checked some of his evidentiary claims.

This is fundamentally why the CAA-NRC combination is troubling: it can only be defended by lack of context and misreading history. Indeed, it threatens the very idea of India’s secular democracy. In taking our position, we do not oppose rehabilitating persecuted refugees -- it is in India’s history and character to do so -- but the CAA-NRC is not the right way forward. It is telling that even the Catholic Church in India, a community ostensibly protected by the CAA, has joined protests against it.

Instead, India should ratify the 1951 UN Refugee Convention, joining the vast majority of the world in acknowledging its responsibility toward those who seek asylum on its shores. We urge the Indian government to adopt a formalized framework for accepting refugees, rather than scoring political victories at the expense of some of the world's most vulnerable people.

Trivedi says that protesters like us embrace “virtue signaling.” We do. Standing up for our values is the very definition of virtue signaling. The point of our protest is to highlight that we value the constitutionally-encoded principles of secularism, democracy and freedom of worship as opposed to a narrow and pernicious idea of Hindu majoritarianism.

Cast merely as an amnesty for persecuted foreign minorities, the CAA-NRC is really an instrument for marginalization of India’s own citizen minorities: Indians that have fought for India in wars, fed India through their labor and served in government. To question their Indian-ness is a disgraceful and dangerous exercise.

The Metaverse: A Universe without Culture

When Students Silence Teachers - A Response to the COMPLIT123 Incident

Leave Abortion to the States