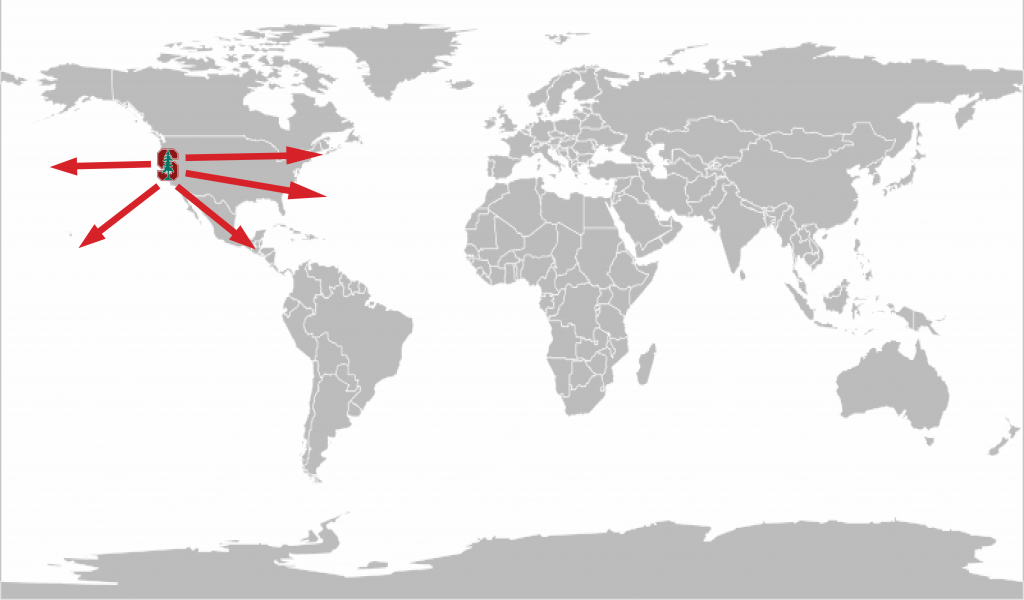 The United States’ invests a significant amount of capital in university labs to foster scientific and technological progress. In 2013 alone, the Department of Energy funded 2,622 projects totaling $777,693,900 across the United States. The federal government also funds a significant number of National Laboratories including Stanford’s Linear Accelerator (SLAC) and Berkeley’s Lawrence Laboratory. At Stanford alone the US Department of Energy funded 31 distinct projects totaling $11,967,000 during the the 2013 -2014 fiscal year.  Many of these laboratories, including Stanford’s, are staffed by undergraduate and graduate students and a large portion of these students are internationals. The federal government spends millions of dollars funding large laboratories and projects, yet many international students, trained by American taxpayer dollars, have to leave the country after graduation. International students face tough immigration laws to continue working in the United States. The United States should reform its laws to fully utilize brilliant international students in the American economy.

Most international graduate and undergraduate students are on F1 Visas  that require full-time enrollment. Stanford’s 2014-2015 graduate profile contained 33.3% International Students with the majority of the international students (58.5%) coming from Asia.  During school, many international students apply for the OPT Visa Program that allows students to apply their theoretical knowledge in an academic program to gain practical work experience. However, the OPT Visa has two major limitations: it lasts twelve months for regular applicants with the possibility of an extension of seventeen months for STEM majors and it limits work experience to positions that directly apply to the student’s field of study. Ventures with friends or startups are mostly out of the question because of difficulties documenting the relevance to their field of study.

The only alternative to the OPT Visa is the H1B Visa that requires international students to find a suitable H1B sponsorship company that fits with their major.  Students only have twelve months to find a sponsor company but issues remain after a visa is awarded: they only last for six years. Furthermore, H1B visas are currently capped at 65,000 (plus 20,000 students) per year and a decade ago, H1B visas were capped at 195,000 per year.

These issues cause many brilliant international students who struggle to get H1B visas or who want to start companies to leave the United States, depriving America of the returns to its investment and exacerbating a “brain drain”. Many brilliant students with PhD’s or Master degrees will return back to countries such as India and China. Professor Wadhwa, a fellow at the Rock Center for Corporate Governance, a joint initiative of Stanford Law School and the GSB, estimates that up 1.5 million skilled immigrants and their families will have to leave the USA because they are trapped in the limbo between H1B Visas and permanent residency. The approval process is incredibly slow and Professor Wadwha has told his Indian students that it could possibly take them “70 years for them to gain residency status.”

Stanford is not isolated from this national problem: international talent cultivated at the Farm is unlikely to be retained in the United States. For example, Pedro Sanzovo, a CS Major from the Class of 2015 from São Paulo, Brazil faced many challenges trying to work in the US during his summers and after graduation. During his sophomore year, he was interested in working in finance but faced roadblocks trying to convince the US government and Bechtel International Center that finance was related to his major. He was able to get approved yet many other students were not able to work in areas different from their majors.

Although happily working for Palantir using his OPT with his STEM extension after graduation, Pedro noted he would love to continue staying in the United States. He wishes “there was a way for me to keep my Brazilian citizenship and work as a foreigner in the US.”

Pedro also describes the difference between internationals and internationals with dual citizens or green cards:“The question I ask them to see if they are internationals without permanent residency cards is if they are going to get kicked out of the country one day after graduation. I’m okay for now because of the STEM rules but if I wasn’t a STEM major I would be drawn into H1B lottery. The big companies cannot guarantee you staying here, you have to get lucky.” When asked about the immigration system as a whole, Pedro noted, “It’s very counterintuitive, I have to fight for the right to work here after being trained with an amazing education from Stanford.”  When students like Pedro have to fight for the right to stay and contribute to the economy, America loses out on a large pool of talent and a return on the large investments in the public and private university education system.

While Pedro’s story has a positive outcome as he will work in the US after graduation, many international students such as Louis Lambillotte received neither compensation nor work authorization from his two summer internships in the US. After the tough challenge of proving to the US Government that his philosophy major applied to his summer finance internship, he chose to look for opportunities after college in the United Kingdom.

The current immigration system should be reformed because of the large number of highly trained international students that have to leave the United States after graduation. The existing system with H1B visas, OPT visas, and STEM extensions fails to address the need of the international students. Caps on the number of  H1B visas are unable to meet the demands of both employers and highly trained workers. Furthermore, the OPT visa does not allow students to work in areas outside their major, a major hallmark of America’s liberal education system. When international students leave, America loses out on the large pool of talent that was trained by US Taxpayers and by America’s elite universities.