The Stanford class of 2018 received an unwelcome surprise today in the form of a hoax email, entitled "Missing Graduation Requirements." 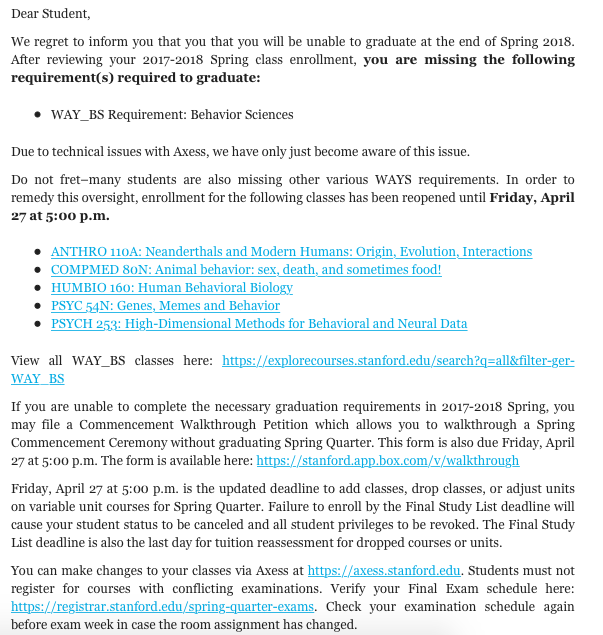 The email, sent from the email address of Senior Class President Madilyn Ontiveros, told students that they had not completed their (fictitious) "Behavior Sciences" (BS) WAYS requirement. It informed students who would be unable to complete their BS requirement not to "fret," and listed a series of real Stanford courses that would apparently fulfill the requirement. It also included an updated final study list deadline of Friday, April 27.

The Review understands that Ontiveros's email account may have been hacked, and that she was not the sender of the email.

The hoax email caused a great deal of stress for several students who spoke to the Review, many of them international students whose legal status could be complicated by a failure to fulfill all the necessary degree requirements. Additionally, students who had already graduated in fall or winter would be unable to re-enroll and continue or begin their professional work.

The email was signed by "Degree Progress" and alleged that it had been sent by the "Stamford [sic.] University office of the University Registrar."

UPDATE: Ontiveros issued an apology email, which reads as follows:

My sincere apologies for the alarming email that you just received from my account.

My email has been hacked from an unknown source that sent an email about a "WAYBS Requirement: Behavior Sciences" to what seems to be the entire Class of 2018. Please be assured that this email is fake, and was not generated by myself or the Registrar's Office. I have already been in contact with the University to handle the problem.

I apologize for the obvious stress and concern that this caused. This was not a joke or anything that I had any part of. All communication regarding graduation and major requirements will come from the Registrar's office directly.