As a student in the 90s, Marissa Mayer was dubbed a campus icon in a Stanford Daily column about distinctive individuals on campus. The article referred to her as “the blonde woman in the upper-division computer science classes” without a single mention of her name, yet those terse descriptors were more than enough to identify the now-CEO of Yahoo, as she was one of the small handful of women in the department at the time.

When Mayer graduated in 1999, a mere 10 percent of Stanford bachelor’s degrees in computer science were awarded to women. Though the number of female CS majors at Stanford has since doubled to over 20 percent, men continue to far outnumber women in most science, technology, engineering, and math (STEM) disciplines on college campuses and in industry nationwide. 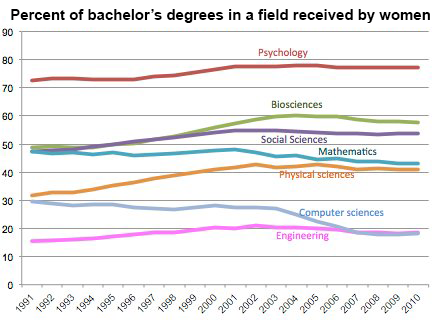 Expanding women’s participation in technology is deeply tied to the social and economic future of our country. In the face of a widening gender gap and surging demand for talented technologists, the tech community has thankfully begun to make this issue a priority. Organizations ranging from private companies to university CS departments and non-profit groups have begun to tackle this issue through a variety of initiatives.

However, one group has been missing from this discussion. Economic conservatives have for the most part avoided the issue, as some proposals have associated the Women in Tech movement with naïve government intervention and other patronizing initiatives. In this critical moment however, conservatives must acknowledge their role to expand the free labor market and kindle social progress by championing female technologists.

Why is this important?

It has become increasingly obvious that we are in desperate need of talented technologists. The 5 percent of U.S. workers who are employed in STEM fields are responsible for more than 50 percent of the country’s sustained economic expansion. Meanwhile, there is a dearth of applicants who meet advertised STEM qualifications, reflected in the skyrocketing salaries paid to the talented engineers in Silicon Valley.

This labor supply issue is intensified by the fact that the labor market is effectively halved with so few women entering STEM fields, which causes anticompetitive market distortions similar to the consequences of labor protectionism. Specifically, women’s exclusion in STEM effectively protects one pool of labor — male technologists — from competition in the labor market, and this dynamic inhibits the maximization of innovation, profit, and value to all of society.

Furthermore, data indicate that female employees and entrepreneurs positively impact company performance. Research conducted by Illuminate Ventures found that the average female-run, venture-backed company achieved comparable early-year revenues to their peers, and they used an average of one-third less committed capital. Additionally, women-led tech companies achieve 35 percent higher return on investment (ROI), according to a study from the Kauffman Foundation. These numbers are somewhat misleading, as lower levels of committed capital produce higher ROIs when coupled with comparable revenues. However, though it is unfair to directly compare ROIs of companies with very different levels of investment, this dynamic indicates that women are resourceful and capital efficient as well as highly valuable to their companies and investors.

Where are all the conservatives?

Unfortunately, certain proposed initiatives have characterized the Women in Tech movement as a liberal goal, opposite to conservative priorities. In particular, proposals such as equal opportunity employment quotas, gender ratios, and affirmative action frame it as a social justice issue, a domain dominated by liberals championing government intervention. In particular, the Left has established itself as the authority on gender debates by striving to equalize historical gender disparities through legislation such as free birth control, Title IX, and equal pay legislation.

Conservatives deeply care about making the world a better place; however, they also believe that government force and other patronizing methods are ineffective at solving core issues such as gender disparities. In turn, they have largely avoid this issue, because they perceive many proposed solutions as naïve or worse.

The cost of neglect

Conservatives are rightly skeptical of some proposed initiatives aimed at solving this issue. In other countries, these strategies have led to superficial results and created market distortions and business disincentives, and there is little reason to believe that they would be more effective in the American tech industry.

For example, ten years ago Norway required corporations to raise female participation on boards to 40 percent or face liquidation. On the surface, it was a smashing success– between 2000 and 2007, women’s representation on Norwegian boards increased from 5 percent to 40 percent, the bare minimum requirement.

Upon closer inspection, however, the data tell a different story. According to a study from the University of Chicago, the quota has had “little effect beyond the obvious: placing more women on boards”. For instance, none of Norway’s 32 large cap companies is run by female chief executive, and there has been no decrease in the gender pay gap. Furthermore, of Norway’s 563 publicly-traded companies subject to the quota, 384 firms responded by going private, and a study by University of Texas concluded that it is likely that many of the firms delisted from the stock exchange to avoid complying with the mandate. This mandate made gender parity an obstacle for companies to dodge rather promoting true equality or expanding the labor pool.

Imposing artificial requirements is clearly not the answer for making substantial strides towards gender parity let alone expanding the labor pool. However, this is yet another reason why conservatives ought to develop and suggest their own solutions rather simply than sitting on the sidelines and criticizing existing strategies.

Then what should we do?

Exposure at a Young Age

Most girls have little exposure to designing, building, and wrecking things, and childhood explorations are extremely formative in determining the scope of children’s future interests. In turn, young women lacking familiarity with these aspects of engineering are unlikely to pursue it as a degree or career. Developing interest in STEM begins at a young age, and the first step is giving young girls more opportunities to explore and create things.

Goldieblox, a company founded by Stanford graduate Debbie Sterling, is a great example of this strategy. Sterling realized that construction toys are integral to developing early interest in science, technology, engineering, and math but that they have traditionally been considered “boys’ toys”. Since its tremendously successful Kickstarter campaign in 2012, the startup has been developing construction toys for girls with the mission “to disrupt the pink aisle and inspire the future generation of female engineers”.

It is crucial that children are encouraged to adopt the growth mindset, the understanding that intelligence can be developed. This begins with teaching kids that technology is something you can learn rather than something you are either good at or not. Students who believe they can learn make far more progress than those who believe they are forever defined by their skills in that moment. On average, women tend to be more cautious in judging themselves, which can lead them to underestimate their potential, abilities, and contributions. By developing the growth mindset, young women can recognize their strengths and weaknesses as abilities to develop rather than a rigid, unchanging set of skills.

Of course our brains are not all the same. Men and women have different strengths and cognitive abilities, and conservatives are quick to point out this politically incorrect truth. For instance, women tend to be better at verbal communication, while men are generally stronger in spatial reasoning, the ability to mentally imagine and rotate objects and a skill that is helpful in STEM fields. However, the data indicate that the gender gap in spatial reasoning is cultural, not genetic, and there is a strong correlation between women who take coursework on spatial reasoning early on and those who are more successful and interested in STEM. The growth mindset combined with access to resources can be a powerful tool for supporting women in tech.

Technology leaders within the industry itself have an important role to play in developing the STEM pipeline. They have the unique ability to act as role models for aspiring technologists and provide an incomparable insight to the needs of the greater tech community.

For example, Palantir Technologies showcases how technologists can be a force for social good. The webpage that describes the company’s scholarship for women in engineering opens with examples of the impact that engineers can have: “From finding missing and exploited children to combating human trafficking and providing relief to victims of natural disasters, organizations around the world depend on good technology to solve hard problems that affect millions of people.” Results of a survey conducted by Intel suggest that girls want to know that their work will benefit others, so this framing of STEM careers may be a powerful tool for exposing women to technology.

The online marketplace Etsy has developed another effective model for developing the skills of incoming engineers. The company providesneed-based scholarships for women to attend Hacker School, a 3 month programming retreat held in New York. In particular, the company provides need-based scholarships to talented female coders. After the first six months of this scholarship program, Etsy saw an 500 percent growth of the number of women on its engineering team. The crucial aspect of this initiative was that Etsy helped women discover the tools to compete with their male counterparts, rather than lowering their standards in order to meet an arbitrary numerical goal or segregating women into special programs.

Palantir’s model and Etsy’s Hacker School are just two of the many effective solutions to this issue, and it will be exciting to see technology leaders adopt, incorporate, and further develop these ideas.

We are at a critical moment. Silicon Valley has begun to intersect with the biggest industries to solve their biggest problems, and these challenges increasingly require more diverse, innovative, and talented teams to discover the best solutions. Opposing harmful government intervention is accompanied by an important responsibility; rather than simply criticizing proposed solutions, we need to stand up and work to improve society ourselves. Unleashing women’s untapped potential is crucial to our economic future, and we all have a part to play in shaping it.