In 1968, Stanford opened its residential doors to the Civil Rights Movement. As the movement towards racial integration swept the nation, Cedro became the first black themed dorm at Stanford. After a series of housing shifts during the mid-70s, the black-themed dorm became the current-day Ujamaa, which maintains that to this day, 50 percent of its residents are black students.

Ten years later, the energy behind the Civil Rights Movement translated into the college admissions processes of schools across the country. In the landmark Supreme Court decision Regents of the University of California v. Bakke, the Supreme Court decided in a 5-4 split that while explicit quotas for racial groups in admissions are impermissible, it is legal to consider race as a factor in the college admissions process. The Supreme Court upheld the controversial decision in another 5-4 split in Grutter v. Bollinger in 2003, after receiving overwhelming support in the form of 69 amicus briefs from universities and other academic institutions in favor of upholding the University of Michigan Law School’s admissions policy. Conversely, there were only 15 amicus briefs – none of which were from universities – in favor of striking down affirmative action. Proponents of affirmative action stated, among other points, that racial diversity brought “a robust exchange of ideas”.

These resources strive to maintain the racial diversity that Stanford touts in its recruitment process. Stanford seems to be accomplishing its goal of promoting racial and socioeconomic diversity in its admissions through affirmative action, advancing one of the university’s core beliefs that “students benefit from unparalleled diversity of thought, experiences, cultures, and ways of viewing the world.” Racial diversity contributes to the accomplishment of this goal given the inevitably different backgrounds of a racially diverse population, but the next step in furthering Stanford’s diversity is to focus on “diversity of thought”.

Stanford has a long way to go in realizing its goal of diversity of thought, starting with the freshman experience. For freshmen interested in a more traditional liberal arts education, Stanford offers the Structured Liberal Education program. SLE’s program overview claims that it “encourages students to live a life of ideas in an atmosphere that emphasizes critical thinking and interpretation.” Interestingly, in an anonymous survey of 44 SLE students at Stanford, 61 percent of respondents self-identified their economic political views as “somewhat liberal” or “very liberal”. In the same group of respondents, 89 percent of respondents claimed to have “somewhat liberal” or “very liberal” views on social policy.

Similarly, 64 percent of SLE respondents noted that their professors are somewhat or very liberal. These numbers may have implications in the classroom that conflict with the notion of an intellectually diverse community. For students seeking a well-balanced education, it is important to consider the possibility that, given these statistics, an apparently “robust exchange of ideas” may end up being a debate between two liberal perspectives. These debates may create the impression of intellectual diversity, even though the perspectives offered may just be different shades of liberalism.

This distortion extends beyond the classroom. In a survey of 219 Stanford students conducted last week, 48 percent of respondents identified their views on economic policy as somewhat or very liberal, while a whopping 80 percent of respondents said the same about their social views. In the same survey, however, 85 percent of respondents claimed that their friends are somewhat or very liberal – more than either self-identified percentage. This suggests that on average, people think that their friends are more liberal than themselves, both fiscally and socially. One possible explanation is that the student body is aware that conservative viewpoints are in the minority, and therefore those who hold those views do not speak up. This further encourages people to primarily express their more liberal views to their friends, creating an even tougher environment for conservative viewpoints to be voiced.

There seems to be a somewhat polarizing effect in the difference between students’ actual views and the views they perceive their friends to have. As time goes on, fewer students identify as liberal. While 83 percent of freshmen identified as somewhat or very socially liberal, only 62 percent of juniors identified as somewhat or very socially liberal. Similarly, 52 percent of freshmen identify as having somewhat or very liberal economic views, while 39 percent of juniors identify as such. While this survey deals with two unique populations instead of tracking one sample size over its undergraduate career,  the respective 21 percent and 13 percent drops in social and economic liberal association are significant. 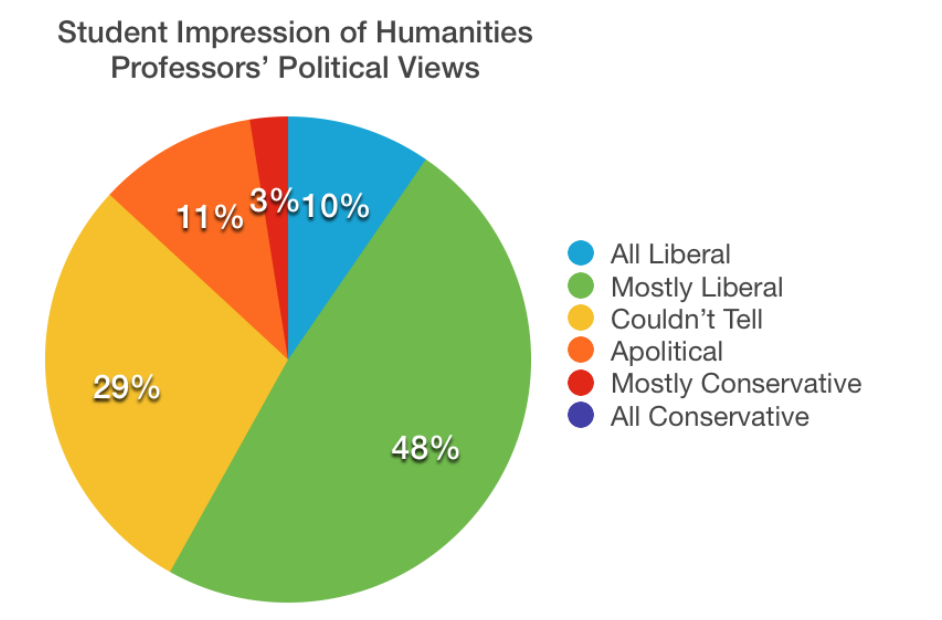 It can sometimes be difficult to participate in intellectual discourse if you know that few people agree with you. Unsurprisingly, of those who identified as somewhat or very socially conservative, 57 percent said that fewer people at Stanford agree with them during political discussions.

This survey suggests both that Stanford students may be a bit more conservative than they are willing to express to their friends, and that a strong majority of professors are at least perceived to be liberal by their students. When creating the university, the Stanfords wrote in the Founding Grant that the university should encourage “the studies and exercises directed to the cultivation and enlargement of the mind.” While Stanford’s movement towards racial diversity in creating residential and academic opportunities for minorities partially accomplishes this goal, it is important to consider that intellectual diversity may be the next step required to achieve this balanced education – and that Stanford may be far from reaching it.