*A Stanford student writes on life and politics inside the Beltway. See other posts here. * 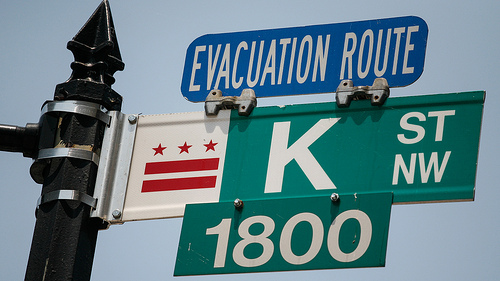 K-Street used to host many of the largest lobbying firms in the country. (Photo: Alex E. Proimos/flickr)

Ross Douthat, in a recent column, compared Washington, D.C. with the Capitol City in The Hunger Games series. Of course, DC residents don’t usually wear flashy clothes. And the fight to the death is only metaphorical in Washington.

But his comparison makes some sense. The Washington metro-area ranks very high in wealth and education compared to the rest of the country. He attributes the DC area’s increasing wealth and prosperity to increased federal spending. Dylan Matthews dives deeper to determine that the closest correlation with DC’s premium wage growth comes from an increase in lobbying and influence-peddling. While other factors may be at play, Matthews writes, “[I]t seems improbable that the $1.7 billion increase in lobbying between 1998 and 2010 wouldn’t increase wages in the D.C. area.”

K-street, then, is the maker of great metropolises. In fact, K-street tries to be the maker of great nations. But this shouldn’t be. Most people naturally reject lots of money and arm-twisting in the lawmaking process, with decent reason. The democratic ideal strives to give all people equal influence in the political process, and entities throwing money into lobbying disrupts this balance.

But these lobbying corporations, special interests, and organizations are not unjustified in their attempts to influence. Companies represent large portions of the economy and should have some say in how their industries are regulated. And many organizations lobby on behalf of underrepresented groups. Stanford should be lobbying for educational interests when they come before the federal or California State governments. Lobbying can have a positive effect on the policy-making process.

For people who still dislike the lobbying industry, a natural solution to the K-street influence would be to tighten lobbying regulations. Since the Jack Abramoff scandal, many have pushed for and seen greater reforms in the industry. But Abramoff himself remains skeptical of the effects of increasing regulations.

The real solution to limiting lobbying and influence-peddling, if one believes this would be better for society, should not come through increased regulations, but rather through decreased federal spending. Lobbying will increase whenever the government takes a greater role in the lives of the people through taxation, spending, and regulation, as the recent success of the Washington metro area currently indicates. And eventually, efforts to regulate lobbying will run into the first amendment, where they will have to stop. Lobbyists cannot be prevented from donating to or bundling for campaigns, as this would clearly limit their freedom of speech. Additionally, lobbyists cannot and should not be prevented from helping write legislation, where they often bring unique expertise to the table.

The best alternative to limiting influence-peddling and lobbying is to decrease the opportunity cost of choosing not to lobby. When overreaching regulations and barrels full of federal cash land on the House and Senate floor, companies naturally want to make their voice heard. And they should, because they have skin in the game. Lawmakers should weigh the companies’ interests with others’ interests, but in the end all interests should be heard.

Huge amounts of federal spending and high levels of regulation require the government to decide how it should all be distributed, and this isn’t always a fair process, as government has to intrude into the affairs of private individuals and firms. Any central planning will disrupt the fairer transactions of the market (the market isn’t always perfect so there is a role for government, just not as big as one sees now). By eliminating the need for companies and organizations to speak up to defend their interests, the lobbying expenditures in the capital will decline. Limiting lobbying cannot come at the cost of free speech, and should not come at the cost of well-written policy. Decreasing federal spending and regulation would let the market take care of lobbying, which may just leave its better parts.

A lesser K-street may mean a lesser DC metro area. But it would also mean a fairer lawmaking process where those people in the DC metro area have a more powerful vote.