The history of *The**Stanford Review *is the story of a group of libertarian and conservative students coming together to establish a publication that would counter the mainstream penchant for liberalism on campus.

In a February 1994 article, *Review *Editor-in-Chief David O. Sacks identified its members as “new campus radicals.” This was as opposed to the old radicals—left-wing activist academics whose presence on college campuses increased rapidly beginning in the 1960s.

The early tradition of the Review centered largely on the academic battle between liberal and conservative intellectualism, a battle the Review tried to reclaim from liberals on campus.

But Review writers, editors, and founders have just as interesting histories from their time after the Review as their time during.  From the editorial and news pages of the paper have come entrepreneurs, CEOs, writers, academics, and many other successful people.

Entrepreneurial Success and the PayPal Mafia

Perhaps the most famous example of *Review *members’ post-college success is PayPal. PayPal, a company founded in 1998 by, among others, *Stanford Review *co-founder Peter Thiel and former *Review *Editor-in-Chiefs Ken Howery and David O. Sacks, is now a multi-billion dollar subsidiary of eBay and one of the most heavily trafficked websites on the web.

After his time at PayPal, Peter Thiel went on to become one of the most prolific investors in Silicon Valley, notable for being the first outside investor in Facebook, and an early investor in Yelp, LinkedIn, and Palantir Technologies. He also founded Clarium Capital, a major venture capital firm, in 2002.

After serving as COO at PayPal, David Sacks founded Geni, a website dedicated to “creating a family tree of the whole world” and a spin-off project, Yammer, an enterprise social network.  Sacks also served as a producer on the widely-acclaimed 2005 film, “Thank You For Smoking.”

Words and Advice from Past EICs

Bob McGrew, editor-in-chief of The Stanford Review in the fall of 2000, served at a time when the discussion on campus focused on the Bush/Gore presidential election.

McGrew came to Stanford when he was only 16 years old. For the first year, he chose not to talk to many people about politics to avoid being ostracized in other ways besides his age. He realized that if he wanted to productively discuss politics with others on campus, the best way would be through the Stanford Review: “The only way to do this on equal ground was to do so at a distance…”

The political sentiments within the Review were balanced enough, nevertheless, for the productive “in-person” conversation that students like McGrew could not find outside the group.

“Meeting people with enough common ground that I could have a conversation without it always being the same conversation – that was actually what initially drew me to the Review,” he remarked. “There was nothing else that challenged people to look at the world a different way.”

After leaving his PhD candidacy in computer science at Stanford in 2005, McGrew started at Palantir Technologies. Today he serves as the Director of Engineering in charge of the company’s government product, a suite of tools for powerful information analysis, often used for defense and intelligence purposes.

To current and future Reviewers, McGrew advised that editors keep in mind how fragile and important the student group is in the setting of a liberal university. “What kept me at the Review was basically just the need for this to be there,” he explained. “If you don’t do something every single week…if there’s not somebody working on this, then it will vanish, it will never come back.”

Alec Rawls served as the *Review *Opinions Editor from 1997 to 1998 and currently serves on the *Review *board.  He writes to the *Review: *“My advice to editors and staffers is always to push the envelope. Conquer territory…When you take an extreme position and readers have to acknowledge, ‘hey, he’s actually right about that,’ you just created a future conservative.”

When Daniel Slate was beginning his work on the Review as a freshman at Stanford, the publication had a policy of going door-to-door through dorms to distribute the paper instead of simply leaving them on newsstands where they would be “tossed in the trash or [recycled].”  Slate was often confronted by RAs during these distributions, which he describes as “an early education in the negative opinion many had of the Review.”

Over time, Slate found the Review’s professionalism during his time as a writer and editor to be beneficial in fostering dialogue between the more conservative and liberal elements of Stanford’s campus.

Slate recalls: “Many left-wing students gave positive comments on the volume on which I worked as EIC, in which we took a more professionalized bent on a conservative publication, rather than focusing on provocation.”

He continued, “I was always pleasantly surprised when left wing students said they read the paper, and even more so when they occasionally said they trusted our reporting more than the Daily‘s.”

After his time on the Review, Slate went to work for Palantir Technologies as a professional writer: “I help lead a team of business writers, which is a role similar in many ways to EIC. In that sense, the Review was one of the most practical things I did at school.”

To current Reviewers, Slate advises, “Apply to the [Intercollegiate Studies Institute] Honors program, go to as many Hoover fellow lunches as you can, always argue about the multiple strands of conservatism (and know the history and theory), and emphasize investigative news— use the long lead time to be better than the Daily in digging up good stories.” 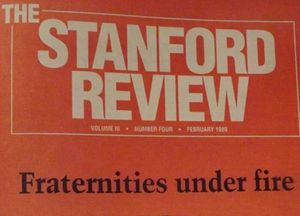 A Brief and Non-Exhaustive History of the Stanford Review