Obamacare is a lousy deal for young people 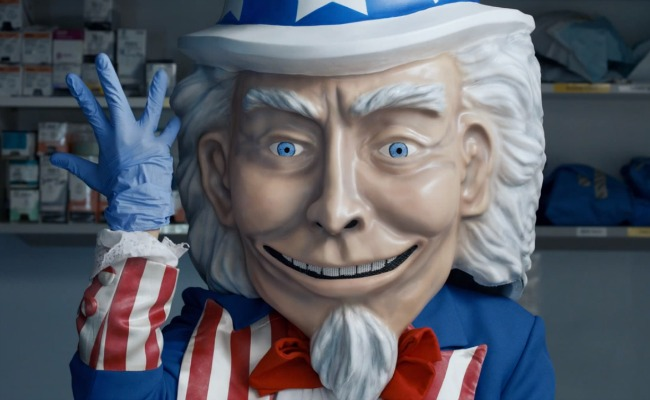 The government spends around $6 on seniors for every dollar it spends on children, according to Andrew Biggs of the American Enterprise Institute. There is a growing concern that older generations are committing “generational theft” by leaving behind enormous debt for young people to pay off in the future. Medicare alone has $35.2 trillion of unfunded obligations — the cost of waging the eight-year Iraq War thirty times — and spending for the program is expected to surge by 82 percent by 2023 as Baby Boomers continue to age. Furthermore, the benefits — if any — that Millennials will receive when we become eligible for Medicare are likely to be far less than what we are forced to pay in as workers. Millennials are projected to become the first generation in US history to have a lower standard of living than their parents. Regina Herzlinger, a professor at Harvard Business School, went so far as to say that Medicare cheats the young. “We’re really stealing from them,” she claimed. “It’s not right.”

The Affordable Care Act (ACA), also known as “Obamacare”, is another instance of generational theft. The legislation relies on those who are young and healthy to subsidize older, sicker people, and it’s doing so by forcing Millennials to pay for benefits they don’t need. Not only is it a direct cost to those young people, but it places a massive opportunity cost on all of society by draining resources from those who will drive our economy for the next generation.

Plans under the ACA are needlessly comprehensive for young people

Young people tend to be healthy and to have little savings. Consequently, they are more likely than older people to opt for plans that cover only catastrophic circumstances if they buy health insurance at all. However, under the ACA’s new regulations, all plans are required to cover with zero copay certain “essential benefits”, including alcoholism counseling, diabetes counseling, and maternity services, and these new requirements significantly raise all premiums. On the new exchanges, a 25-year-old non-smoker in California pays $184 per month for the cheapest plan, in contrast to a $92 median cost of the five cheapest plans on HealthInsurance.com in 2013.

Even before the ACA took effect, when the cheapest plans were less extensive and far more affordable, over a quarter of 18- to 30-year-olds decided that it made more financial sense to remain uninsured. Those individuals who thought they would not see a return on investment from even a barebones insurance plan likely wouldn’t pay more for wider-ranging plans required under the ACA. For many young people, it simply does not make financial sense to purchase more comprehensive insurance products, since they are unlikely to use enough of the benefits to compensate for the plans’ high costs. 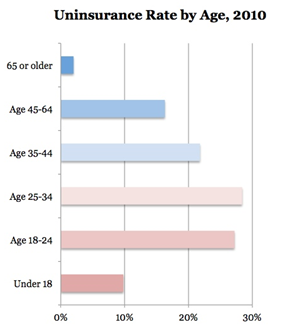 The “community rating laws” and the restriction against denial of service due to pre-existing conditions also raise the cost of premiums disproportionately for young people, despite the group’s relatively low health costs.

Pushed by American Association of Retired Persons (AARP) lobbyists, the “community rating laws” prohibit insurers from having an age rating (the pricing ratio between the eldest and youngest beneficiaries in a risk pool) greater than 3:1, although older beneficiaries have on average six times the health expenditures that younger people face. Healthcare policy expert Avik Roy explained, “The net effect of this ‘community rating’ provision is the redistribution of insurance costs from the old to the young.”

The restriction that insurers are no longer allowed to turn away clients due to pre-existing conditions also raises costs by making it more expensive for insurers to cover their pool of beneficiaries, because they now must cover riskier people as well as a broader range services. In turn, this raises premiums for healthcare consumers.

The architects of the ACA realized that young people would have little incentive to participate in the healthcare exchanges and that this would lead to a serious structural problem called “adverse selection”: if the exchanges failed to recruit lots of young, healthy people, the premiums on the market would be extremely high. Thus, lawmakers added the individual mandate requiring all Americans to purchase healthcare. By 2016, the fine for remaining uninsured will ramp up to $695 per person or 2.5 percent of household income, whichever is greater.

“The individual mandate is absolutely necessary if you have a community rating law,” explained Dr. Jay Bhattacharya, an associate professor of Medicine and Economics at Stanford. “The individual mandate is an attempt to address the adverse selection problem [caused by the community rating laws] by essentially forcing people for whom insurance would otherwise be a bad deal to join in.”

Subsidies offered by the federal government offset the cost of insurance for very low-income people. However, most young people are better off on average if they just pay the penalty. A recent study by the National Center for Public Policy Research shows that about 3.7 million of those aged 18-34 will be at least $500 better off if they forgo insurance and pay the penalty, and over 3 million will be $1,000 better off if they go the same route. Opt Out, a campaign organized by the group Generation Opportunity, is urging young people to be wary of signing up for the health care exchanges set up under the ACA and to pay the penalty instead of “purchasing a policy through the Obamacare exchanges that will cost more with no return on investment”.

ACA perpetuates generational theft beyond redistributing health costs to Millennials through other provisions like the employer mandate. This mandate requires all businesses with more than 50 full-time employees to provide health insurance and imposes a penalty of several thousand dollars per employee that is not covered. A survey by the Chamber of Commerce found that 71 percent of small business owners are finding it harder to make new hires because of this mandate, and young, inexperienced people entering the workforce will bear the brunt of this slowdown.

Businesses are also incentivized to cut the hours of or lay off the least experienced workers, who are often the youngest. Jimmy John’s announced that the company plans to cut workers’ hours in order to avoid having to offer them health insurance under Obamacare, and many other firms have been forced to act accordingly. “We have to bring them down to 28 hours [per week],” said Jimmy John’s CEO. “There’s no other way we can survive it.”

Furthermore, young people are simply in a poor position to cope with additional costs. Entering the workforce, they generally have low incomes, small savings, and student debt. According to Pew Research, households headed by a senior were 47 times wealthier than those headed by someone under the age of 35. It is unfair to place older, wealthier individuals’ healthcare costs on the shoulders of those just starting out in life.

Proponents of the ACA argue that it really is not so unfair, because today’s young people are tomorrow’s old people. They say that higher costs in the short term will be offset by the provision that raises coverage of children who fall under their parents’ plan up to their 26th birthday and when today’s young generation grows old. However, Chris Conover of Forbes found that the ACA is not a good deal in the long term; for 22-year-olds, it is “essentially imposing a tax of 13.8% on the lifetime premiums they would otherwise pay”.

**There is an opportunity cost of draining young people’s income**

It is important to keep in mind that policy does not operate in a vacuum. Every dollar collected in taxes and every mandate levied by legislation has far-reaching effects. As our government increases the financial burden on the young, fewer people will have the resources to start businesses, to expand their human capital through education, to raise a family, or to pursue any other aspiration. These important facets of society will suffer as young people are forced to devote more resources to cross-generational subsidization. If nothing else, government programs such as the ACA require a thriving tax base, a condition that cannot be met if economic growth is stunted by legislation meant to serve short-term aims.

There is no doubt that the United States faces severe healthcare challenges and that reform is necessary. However, when considering the efficacy of the ACA, we need to remember that we are stifling the potential for future growth as we funnel resources away from young people who are just starting out in life.

Should we trust the fact checker?

In recent years the “fact check” has risen to obligatory prominence on the pages and screens of news outlets. If

In an op-ed in today’s Washington Times, which Real Clear Politics titles “Beneath Dem Proposals, Nothing but Hurt,” Stanford

Don’t Politicize the Prize (any further)

First off, I suppose it’s fair to congratulate President Obama on winning the Nobel Peace Prize. That having been