Last Monday, March 9th, activists at Stanford organized a protest in response to the job promotion of a Bay Area black woman, Condoleezza Rice, who was recently appointed Director of the Hoover Institution.

The protest, which was previously reported on in a Review exclusive, was planned during black history month and carried out during women’s history month.

It came just one day after civil rights leaders and politicians marked the 55th anniversary of civil rights marchers being attacked by state troopers and police on the Edmund Pettus Bridge in Selma, Alabama. Dr. Rice grew up in segregated Alabama and was just 11 years old on “Bloody Sunday.”

In this Monday protest, two activists were “bound and gagged” and then smeared with red paint, symbolizing the blood of “the victims of U.S. imperialism.”

The protest was originally scheduled for 11:00 a.m. to 3:00 p.m., but organizers announced a “restructuring” in an email to participants in light of the cancellation of most on-campus events and classes at Stanford due to the coronavirus.

In justifying not cancelling the event outright, organizers wrote that it is “still important to hold those complicit in imperialist war accountable.”

While the Review commends the facial coverings as a precautionary measure against the spread of coronavirus, video evidence contradicts the claim that the lead protesters were “gagged.” In fact, they were singing loudly with fellow protesters the following refrain:

“The students are freedom fighters, learning how to fight.

We’re going to fight all day and night until we get this right.

As previously reported, protesters misspelled Dr. Rice’s name on a banner as “Condoleeza,” but the Review is pleased to learn that they added the second “z.”

Another banner stated, “Hoover is the War Machine.”

As expressed by its founder Herbert Hoover ‘1895, the mission of the Hoover Institution

“… is, from its records, to recall the voice of experience against the making of war, and… to recall man's endeavors to make and preserve peace.”

The Review was unable to photograph or film the event in person, but we would like to thank the Chair of the Undergraduate Senate and ASSU Executive Candidate Munira Alimire ‘22 for providing photos of the event through social media.

The protest was also supported on social media by Who’s Teaching Us?, a campus group claiming to support faculty diversity. They recently distributed fliers citing unverified statistics that Stanford faculty are “70% White” and “70% cis-men.”

Dr. Rice was the first female and only ever black Provost at Stanford, and will be the first in both categories to lead the Hoover Institution.

The Review has reached out to Who’s Teaching Us? to inform them that Dr. Rice is a black woman and that the outgoing director is a white man.

Stanford Under Investigation for Discrimination Against Men 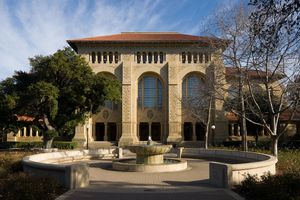