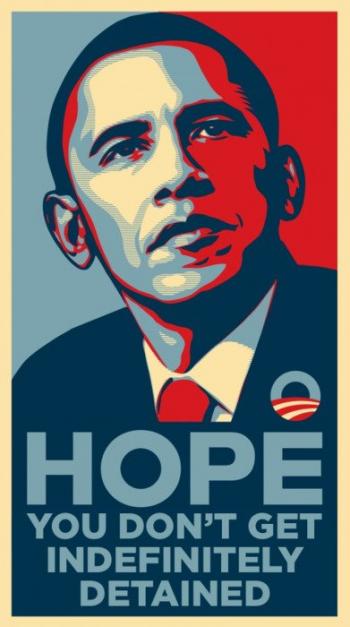 complete inefficacy on the part of the Obama administration. Whatever the reason, President Obama has gone back on his word and refused to veto a dangerous piece of legislation that could have dangerous repercussions in the future.

The NDAA has traditionally only served as a simple budget measure for the Department of Defense, allocating funds and setting policies for their spending. Historically, though, this has been manipulated to include provisions that won’t be challenged, because the bill is too important to be slowed down in congressional arguments. Recently, the NDAA has been used to handicap President Obama’s ability to shut down the Guantanamo Bay detention center and to allow for the indefinite military detention of anyone suspected of aiding the activities of any terrorist group without due process of law.

Of course this sounds bad, but ultimately inconsequential to most Americans. But these two provisions have far-reaching impacts that threaten basic constitutional principles of freedom far beyond what national security can justify.

The former is one of many setbacks to the closing of Guantanamo Bay that Obama has attempted since his first day in office. Congress has consistently voted down the allocation of funds necessary to transfer prisoners out of the camps, which on the surface makes sense, given our fiscal crisis. But the NDAA 2013 allows for the expansion of major weapons programs throughout the armed services, including $60 billion for the Navy’s F-18 fighter plane program alone. This is thousands more than it would cost to move the Guantanamo prisoners to the mainland for prosecution or repatriate those who have been already been cleared for transfer back to their home countries. This is also a violation of constitutional separation of powers, as Congress is basically suspending the president’s role as commander-in-chief and executor of matters of foreign affairs.

Not that this matters, though: Obama’s own actions reveal his commitment to shutting down Guantanamo. Despite paying lip service in his signing statements to fighting the unconstitutional impositions on his executive authority, the president has signed the NDAA into law two consecutive years with no attempts to remove these provisions and breaking his own threat to veto the bill. He also restarted military trials and gave an executive order that allows for the indefinite detention without charge of those kept at the base. Just last week, the office in charge of ending operations at Guantanamo prison camp was shut down by the State Department.

Why does this matter though? For one thing, the abuses of human rights at Guantanamo Bay are a stain in our national history, and its continued operation shows a tacit approval of these actions, especially considering the same crimes are still committed. Our refusal to adhere to a higher standard is only fuel to terrorist groups who can point to this as an example of America’s hypocrisy in regards to human rights. But more importantly, it shows a worrying two-facedness on the part of the Obama administration. Despite speaking often about his commitment to closing Guantanamo, he has only taken actions that have prolonged its activity. His real motivations and goals remain unclear.

The second major ramification of the NDAA is its continuance of last year’s section 1021, which allows military forces to hold anyone suspected of aiding a terrorist group indefinitely without trial. If brought to trial, suspects would be tried in a military tribunal described under Article I of the Constitution as opposed to Article III courts, denying due process of the law. Many have argued that this is already provided for by the Authorization for Use of Military Force Act of 2001, which is already frightening policy, but the new law is far vaguer and specifies that the law can apply to U.S. citizens and legal residents. Opposition to the law has been widespread, including the Feinstein-Lee amendment in the Senate for this year’s NDAA that would have negated this provision but was nixed behind closed doors when the bill went to the House.

Last year, Obama mentioned in his signing statement that he found trouble with these parts of the bill, and he would seek to remove the offending sections. Since then, though, a lawsuit against him filed by a number of journalists and activists (Hedges v. Obama, 2012) sought to do precisely this and won an injunction from District Judge Katherine Forrest. Instead of ceding and allowing section 1021 to be struck down by the judicial system, the Obama administration appealed and filed for a stay on the injunction. The Supreme Court denied the application to hear the case or remove the stay. The argument made by the administration could have easily been that the plaintiffs (journalists who felt their ability to appropriately cover stories about terrorist groups was threatened by the law) were not endangered by the law. The fact that the administration refused to make this claim proves that the law impinges on First Amendment rights.

Even if Obama personally has no plans to implement the laws in such a fashion, his intentions mean nothing. Though the signing statement might provide a guideline for how his administration will interpret the laws, they have no binding power. Future administrations will have the ability to remove the rights of anyone who even consorts with groups labeled by the U.S. as terrorist indefinitely. Obama’s signing statement for the 2013 NDAA didn’t even make mention of section 1021. An inclusion this year states that the provision should not be construed to deny the writ of habeas corpus, which works a superficial fix. But the habeas corpus has already been affirmed for all people. This is only applicable if those detained by the military had access to an Article III court, which is impossible under detention. The wording serves as a convenient way of ignoring the harsh implications of section 1021.

So why worry about this? Obama has shown his willingness to deny due process of law in the pursuit of terrorism suspects with his actions in Guantanamo, and he is now expanding the government’s power to detain so it includes anyone who is even suspected of associating with terrorist groups. It’s your choice: Is he seeking this power for the executive branch, or is he really this crippled by Congress?

These issues seem distant from Stanford. We live in the bubble, as is often pointed out. But that doesn’t mean this legislation doesn’t affect us. Without even resorting to a slippery slope, it’s easy to see that our government doesn’t prioritize human rights or transparency and is more than content with going behind the backs of the American people to take away the freedoms of not just America’s enemies but its citizens as well. Stanford has a history of letting the government know when we disagree with its policies. While violent protests aren’t quite feasible, a simple letter to your congressman might make the slightest bit of difference. To put your voice behind measures seeking to change the NDAA, visit http://bit.ly/VKSsi1.

UPDATE: This article was edited to change “legislature” to “legislation” in the first paragraph.