A debate entitled “Should the Government Restrict the use of Fossil Fuels?” featuring the founder of the Industrial Center for Progress and the Senior Director of the Sierra Club’s Beyond Coal campaign escalated from feisty to zealous on Tuesday. The two speakers and crowd members clashed over of climate change, fossil fuels, and renewable energy. What began with dismissive statements towards one another’s organizations became thinly veiled personal accusations of misrepresentation as both the moderator and host were forced to repeatedly remind audience members to not to shout at speakers.

The two speakers diametrically opposed each other from the beginning. In his opening remarks, Alex Epstein, author of Fossil Fuels Improve the Planet, began by claiming “Warming, globally speaking, has basically not occurred in the last 15 years.” True to the name of his book, however, his argument did not just focus on defending fossil fuels’ environmental impact. He instead claimed that fossil fuels, most importantly coal, have been the driving force behind the quickly improvement in quality of life and life expectancy, particularly in developing countries. “The life expectancy in India has jumped 7 years,” he emphasized, claiming success followed a greater availability of food, water and medicine thanks to the fact that “you can get as much [coal] as you want in the foreseeable future.”

Nilles neglected to rebuff this claim, but attacked the coal industry on pollution and its consequences in his opening statements, beginning “the mining and burning of fossil fuels is the largest source of pollution in the world.” He cited environmental destruction in the Appalachians, where “10,000 miles of rivers are gone forever” and the coal industry’s “lock on politics.” He attributed this to the fossil fuel industry taking advantage of more loopholes than any other industry in America. “Only one industry in America is allowed to dump mercury [into water supplies],” he explained. He also claimed that if coal plants were required to pay for the cleanup of environmental damage they do, coal would no longer be economically feasible.

Epstein defended the coal industry, admitting that while coal is imperfect, China and India’s rapid improvement are testaments to the benefits of coal. He also attacked the assumption that it is worth sacrificing energy to prevent pollutants. As an example, he offered the linear no-threshold model, a theory that predicts that if a certain level of radiation is dangerous, than a lesser dose must be harmful to a proportionally lesser degree. Despite a large body of evidence against the model, it is still widely used in legislation today and applied to fields outside of radiation, which Epstein cited as an example of “bad science rampant in government.”

Nilles brought an extended example of his own. He told the story of a Native American tribe in Nevada living next to a coal plant producing poisonous dust that swept across the tribe’s land. Whether because of an illegal practice or lack of oversight, the tribe suffered direct consequences of pollution. He further cited mercury as a more general danger, saying “one in ten women in the US have enough mercury in their body to cause a loss of IQ [to a child].”

Epstein would later respond to Nilles’s argument, saying that pollution is indeed bad, but that it’s “noise” compared to the benefits that energy has had on human life. “If 100 million people are breathing harmful air,” Epstein countered, “why are we all living longer?” “Any time you cut down access to energy, you’re cutting down someone’s life and ultimately everyone’s life,” he elaborated.

This prompted Nilles to claim that “we have options” in our energy sources, notably clean energy. “87% of new [electricity] generation this year was non-fossil fuels,” he claimed, following up by saying “Texas is building more solar than anyone else,” and emphasizing the economic feasibility of these solutions.

The two could not find any common ground on the issue. Epstein initially used the example of Germany, the perceived global leader in clean energy who is currently building 12 coal plants to support the wind energy network. “[No form of clean energy] has ever been scalable,” Epstein concluded.

The argument over clean energy eventually escalated, with Nilles presenting the assertion of the CEO of a Nevadan coal utility that “coal is dead” and upcoming solar projects funded by Warren Buffet and Wal-Mart as evidence of clean energy’s feasibility while and claiming that fossil fuel companies are scared of wind energy’s potential. Epstein, meanwhile, compared the suggestion of replacing coal with wind to replacing a skyscraper’s steel infrastructure with wood. Epstein noted that the Sierra Club formerly supported the use of natural gas, “but when gas became popular, they opposed it. The environmental movement has never backed a practical source of energy,” he concluded to laughter from the crowd. “I will bet you that once fossil fuels do their fair share, clean energy wins hands down,” Nilles later respond.

The two also went head to head on climate change. Epstein initially claimed, “the real consensus is that there is a greenhouse gas effect, but not that it’s catastrophic.” He explained that climate change predictions are “all based on predictive models”, but that the models have so far all been incorrect. He cited a NASA’s scientist’s prediction about temperature and greenhouse gases. Despite underestimating the amount greenhouse gasses we have produced, the model overpredicted temperature change. “These speculative models are being used to promote policies to restrict fossil fuels,” he lamented.

Nilles largely ignored this argument but cited groups of scientists including the Academy of Sciences that are predicting “we essentially need to be off fossil fuels in two decades to prevent runaway climate change.” Epstein jumped on the claim, asking “what scientists?” and declaring that there is no one group of scientists with all the answers. He described Nilles’s outlook as a “quasi-religious fear of climate,” and repeated “these fears are completely based on predictive models that can’t predict the future.” Nilles in turn compared the coal industry to the tobacco industry. “It’s a very seductive idea to say ‘well [the consequences] haven’t happened yet’… It’s a classic tactic from the tobacco industry and now fossil fuels. It’s just delaying,” he said.

One audience member immediately told Nilles he was “deeply offended” by the comparison, claiming Nilles willfully ignored the invaluable progress the coal industry has created in America. “Duly noted,” Nilles replied. The audience member, a self-described entrepreneur, then challenged Nilles on why he wasn’t working on entrepreneurial solutions himself. The two had a miniature debate about the role of democracy in energy that quickly escalated until the host sternly reminded the audience that they should ask simply ask questions. From that point on, however, the audience became much more vocal, laughing at Epstein for saying to Nilles “I’m against subsidies, if you know what a subsidy is,” and in turn laughing at Nilles for refusing to give a statistic an audience member specifically requested.

The next scuffle came quickly afterwards. This time, an audience member was “deeply offended” by a remark from Epstein. The audience member challenged him, “Is it ok to marginalize smaller communities for the greater good?” Epstein’s response, which began with a reference to the “bigger picture” was quickly lost as again the two began quickly exchanging retorts bordering on sarcastic. Both the moderator and host again reminded the audience not to give speeches.

Nilles seized on the audience member’s challenge in his closing remarks, reflecting “[Epstein is saying] ‘A lot of little people are going to be hurt but globally…’, that’s a choice we don’t have to make in America.” He again cited that California will be at 30% clean energy in 5 years, while multiple states including Iowa and South Dakota are already at 25%. Epstein instead focused on the broader picture, saying that while pollution does have problems, “the bigger issue is that people are malnourished… [and without] clean water],” problems immediately solvable by greater energy availability.

Though the two speakers cordially shook hands when the host declared the end of the event, more audience members were left standing with questions. Debates broke out and crowds immediately formed around the speakers following a quick thank you from the moderator.

The debate simultaneously revealed intense passion around the issue and effectively gave a chance for multiple schools of thought to voice arguments. Both the speakers and the crowd colored their discussion with vocal opinions, The lack of consensus reflects not only the contentiousness of the debate, but the honesty both sides brought to their defense. This was not merely a debate for show, but a debate of ideas and beliefs that inspired the crowd instead of inspiring a half-hearted consensus. 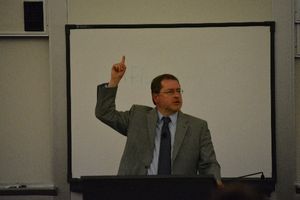 Jeh Johnson: “The Role of Lawyers in National Security Policy-Making”

“I was an eyewitness to 9/11- I saw the second plane hit the twin towers…Afterwards, like so many