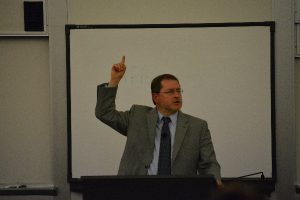 Both controversial and almost universally recognized as necessary, prison reform has been creeping up from a longstanding issue in California and other states to the national stage. Grover Norquist, a conservative tax reform advocate and member of the NRA board, believes that conservatives will lead this traditionally left-wing reform area. Speaking at the Law School this afternoon, he explained the historical problem that liberals face with reforming the justice system: beginning with Dukakis’ failed 1988 Presidential campaign that hinged in part on a prison furlough program Dukakis promoted. After a prisoner on furlough raped a woman and assaulted her fiancé, both his primary opponent Al Gore and Presidential race opponent George. H. W. Bush attacked Dukakis’ softness on crime. Ever since then, Norquist explained, liberal candidates have been forced to worry that if they pass any prison reform legislation, they’ll take the blame if any former convicts commit repeat crimes.

When an audience member questioned why a conservative candidate wouldn’t face the same criticism from the right in his or her primary, Norquist claimed “We have enough conservative names [behind prison reform] to help defend from attacks on the right.” And indeed, many conservative states including Texas have been implementing prison reform. Headlined by increased drug rehab programs and limiting incarceration for non-dangerous criminals, Texas’s new legislation has cut its incarceration rate by 10% this decade and according to Norquist, has saved $2 billion by not building two new planned prisons and decommissioning others.

Norquist was quick to clarify, however, that he was not simply advocating Texas’s approach, but rather using it as evidence that individual states can make progress on the issue. The best strategy, he believes, is federalism. “You’ve got 50 states competing to provide the best government at the lowest cost,” he said. He countered arguments that the federal government should legislate prison reform, explaining “If it’s the same everywhere, you can’t differentiate what’s working and not working.” He also rejected the substitute idea of comparing the US to other countries, saying “I’m much more comfortable comparing Illinois and Indiana than saying ‘Why can’t we be like Zambia?’” His end goal of maintaining or decreasing crime rates while cutting costs is already working in not only Texas, but South Dakota, where 51% of incarcerations stem from drugs and alcohol related crmies that pose no immediate danger to the public.

When asked by an audience member about the risk of rising crime after limiting jail sentences, Norquist took multiple minutes to specify his stance: “Step 1 is you’ve got to ensure people that crime will go down, not up.” “You can’t sell this if crime goes up,” he laughed. He backed up his belief in the feasibility of this strategy though, again citing Texas. “By all measures, Texas… can say ‘things have gotten better for citizens and we’re saving money’”.

On a final note, he encouraged “baby steps” in all legislation. “Even if you believe in this 100%, don’t risk failing because you went just a little too far,” he says, warning against losing credibility for your idea if you move too quickly and things go wrong. “Baby steps” he repeated, “and it’ll work.”

Energy Debate at Law School Turns Fiery A debate entitled “Should the Government Restrict the use of Fossil Fuels?” featuring

Jeh Johnson: “The Role of Lawyers in National Security Policy-Making”

“I was an eyewitness to 9/11- I saw the second plane hit the twin towers…Afterwards, like so many