As flood waters begin to recede in some areas of Pakistan, leaving incredible destruction in their wake, the ASSU Executives, Angelina Cardona ’11 and Kelsei Wharton ’12, are launching a [Pakistan Flood Relief initiative](http://assu.stanford.edu/index.php?option=com_content&view=article&id=241). The need is undoubtedly enormous: although current estimates of the death toll are [not yet large](http://www.cnn.com/2010/WORLD/asiapcf/08/21/pakistan.floods.death.toll/index.html) compared to some other disasters, an estimated [15 to 20 million](http://www.nytimes.com/2010/08/19/opinion/19iht-edban.html) people have been affected and the risk for a massive outbreak of waterborne disease is high. A full one fifth of the country lies under water and even as some areas begin to dry, others are being submerged, complicating relief efforts.

The initiative will involve an ASSU-linked donation website as well as an effort by the Executive to gather support from other colleges and to form an umbrella group that could raise even more money. In addition, Cardona is personally offering to match dollar-for-dollar the first $500 in donations. $2500 had already been donated (prior to the launch of the initiative), which Cardona explained is from the United Nations High Commission for Refugees (UNHCR) to start off the ASSU Campaign.

The announcement of the initiative comes after an earlier email by Cardona on August 19th to a variety of ASSU lists (Senate, GSC, class presidents, Executive Cabinet) and One Stanford, the list for Cardona/Wharton supporters, saying that:

Asfandyar Ali Mir, Stanford 2012 and citizen of Pakistan, [has been named] … the Czar of Pakistan Relief Efforts (an unpaid position). He came to us with deep concern for his country and enthusiasm to work. He wrote Kelsei and I to see what we could do as student leaders to help increase awareness of the situation and to raise funds to help people in need as a result of the flood.

The establishment of a relief czar position follows in the footsteps of the Gobaud administration’s reaction to the Haiti earthquake, which resulted in the creation last year of a Haiti Relief Czar, a position filled by Faradia Pierre ’12. Perhaps learning from the Gobaud administration’s fight with the GSC about making the position paid, the current position, as mentioned above, is unpaid. In terms of creating the position, this is also a speed booster, since it precludes the need for legislative approval. The history of ASSU organized relief efforts is positive as well: last year, $450,000 was raised for Partners in Health by the ASSU unified relief effort (including the participation of 27 other colleges and universities). Indeed, Gobaud cited the effort as his most successful action as ASSU President. The Cardona/Wharton has a long term ahead of them so we needn’t assume that the same  for them, but it will be interesting to see the comparison.

The site to donate is linked to USA for UNHCR, the United Nations High Commission for Refugees, and features different donation levels that correspond to particular aid packages, ranging from blankets to a supply of clean water (indeed, one of the ironies of the flooding is its destruction of supplies of clean water, raising the risk of cholera and other waterborne diseases). (The site also includes a “high” donation level of $1000, hopefully inducing the classic “anchoring” effect from psychology).

A final note on donations: if you are thinking about donating, do it (if you aren’t, think about it). The only question would be whether to donate through this site or another one: if you have a parent who works at a major corporation, you may be able to have your parent donate (then pay them back) and get a matching contribution that way, even once Cardona’s matching dollars are exhausted. However, if you know that you probably won’t actually get around to talking to your parents about this, then use the site: it’s quick, it’s easy, and it’s going to an organization that makes a difference. What more could you want?

Here’s the full text from the email:

As many of you have heard, Pakistan was hit by torrential flooding a few weeks ago. The flooding has continued ever since, and it has devastated the life and livelihood of 20 million people, according to an estimate of the UN. Stories, visuals and reports coming out of the flood hit zone are heart wrenching, but even they do not do a very good job portraying the enormity of the unfolding tragedy. The scale and sheer size of the disaster is overwhelmingly huge, with aid workers describing the flood’s impact as worse than the 2004 South East Asian Tsunami and the 2010 Haiti Earthquake combined.

This is an opportunity for us to come together. We are launching the ‘Pakistan Flood Relief Effort’ campaign to rally support and raise funds for this mammoth catastrophe. We have partnered with the United Nations High Commission for Refugees (UNHCR) and all funds raised will go to this organization to aid Pakistan flood victims.
The campaign is online and you can start contributing now. We are asking students to donate just $5.  We will be matching the first $500 of funds raised from our executive salary. Students, members of the faculty, employees, alumni and friends of the Stanford community, please support the flood-affected people of Pakistan: [DONATE HERE](https://www.kintera.org/site/c.lfIQKSOwFqG/b.6201771/k.36AB/Pakistan_flood_emergency__Stanford_University/apps/ka/sd/donorcustom.asp?msource=stanpak).
Our university has always shown extraordinary commitment to humanitarian issues. This once again is one such humanitarian disaster, albeit more devastating than any other in recent history. It calls for action, and we can help the 20 million affected in Pakistan.Sincerely,
Angelina Cardona, Kelsei Wharton and Asfandyar Mir ASSU President, Vice President, Director Flood Relief Effort 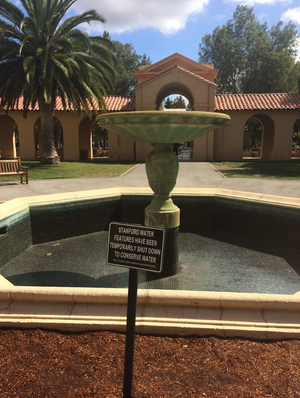 Is Stanford Doing All it Can to Conserve Water?