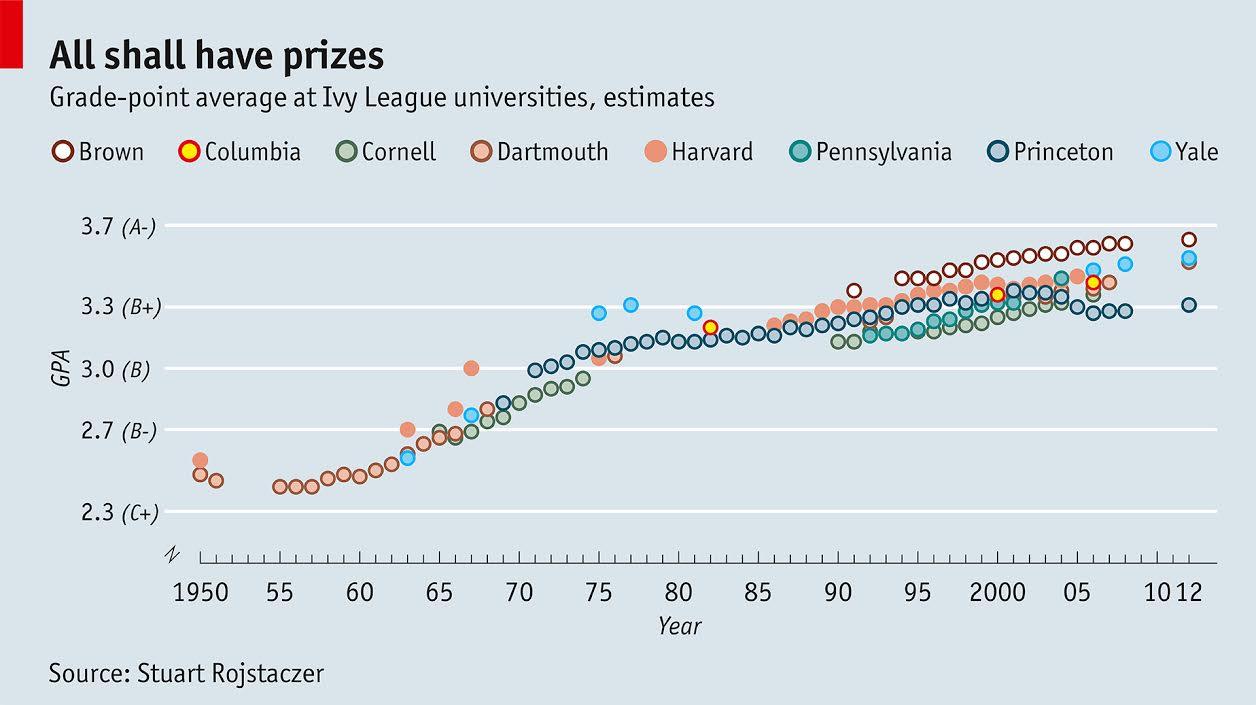 On the surface, the typical grading system seems simple: a 4.0 equals an A grade, a 3.0 is a B, and so on, and students with a higher GPA show more academic prowess than their counterparts with lower grades. However, that paradigm is changing with the rise of grade inflation. Over the years, the average GPA has been growing: in 1960, students in both public and private institutions earned about a 2.4, a little above a C+. By 2006, this number was about a 3.0, a B, in public institutions and even higher in private ones

This phenomenon of grade inflation, in which schoolwork today receives a higher grade than it would have years ago, is a point of concern for schools across the country. High grades can help students land job offers, school acceptances, and other opportunities, a tantalizing outcome especially in today’s competitive job market. However, with 43% of students earning A grades as of 2012,  the value of individual students decrease: their academic records blend in with those of many other equally high-achieving students. Deans of admission and prospective employers, as a result, have a tougher time deciding who is truly worthy of a position than they would have if grades followed a normal distribution. The knowledge that A-grades are common can also decrease student efforts: a 1996 study of Cornell’s actions against grade inflation revealed enrollment increased in classes with relatively easy grading policies

Most obviously, different grading policies across campuses create enormous controversy. Last December, for example, Harvard’s Dean of Undergraduate Education stated, “The median grade in Harvard College is indeed an A-. The most frequently awarded grade in Harvard College is actually a straight A.” Harvard Government Professor Harvey Mansfield believed the high median grade “represents a failure on the part of this faculty and its leadership to maintain our academic standards” while Harvard’s Classics Department chair Mark J. Schiefsky added that the grade inflation “seems….troubling…one has a range of grades to give and one would presumably expect a wider distribution.”

Likewise, in the spring of 2014, Yale University’s grading committee announced that 62% of grades given at Yale fell within the A-range whereas only 10% of the grades were in that range 40 years ago. Yale Philosophy professor Shelly Kagan thinks this upward compression of grades nullifies grade’s effectiveness as evaluative tools. “If B-plus is being kept for bad work, and virtually everyone is getting A or A-minus, this eliminates any genuine feedback,” Kagan said. “I’ve always thought this is a disservice to undergraduates”.

While Harvard’s and Yale’s grading policies for the 2014-2015 academic year are still under consideration, two similarly prestigious schools—Princeton University, a co-ed school in New Jersey and Wellesley College, an all-women’s college in Massachusetts- have implemented concrete policies to curb grade inflation on their campuses.

In the fall of 2014, Princeton University adjusted its grading policy so that no more than 35% of the grades given out in any department should be As, a maneuver which has been  controversial from its inception. Though Princeton attaches a letter explaining its grading policies to its students’ applications, undergraduates have complained the new policy makes them look like less qualified candidates than peers from schools with more lenient grading policies. They also believe that their academic environment is one of sabotage and competition for the few As available, not of collaboration and the pursuit of knowledge. On the flipside, the knowledge that only a handful of As will be given no matter what can decrease student anxiety. As one student admitted, “The grading policy provides students (myself included) with an easy excuse anytime we receive grades that we don’t feel reflect our work.”

Now, however, Princeton is reconsidering its grading options. Undergraduate Student Government Academics Committee chair Dillon Sharp ’14 explained that, even if the policy were revoked, not every Princeton student would earn an A, and subsequently, grades would be able to represent one student’s intelligence compared to his or her peers’. Changing the policy would also take the focus away from grades, which Sharp describes, as “such a minimal part of the Princeton experience”.

Like Princeton, Wellesley College imposed grading guidelines about a decade ago. As noted on the Registrar’s website, which is accessible to alumni as well as current and prospective students, average grades in courses at the introductory (100) and intermediate (200) levels with at least 10 students should not exceed 3.33, a B+. Professors who feel as though students in a particular section were particularly exceptional must write a letter to the administration explaining why they want to exceed the cap. The Academic Council, the main governing body at Wellesley, collects and reviews all letters to see whether specific departments are consistently violating the policy. The Journal of Economic Prospects published the effects of Wellesley’s anti-inflation grade policy in its Summer 2014 volume. Unsurprisingly, the chance of students earning an A or an A- dropped 18% after Wellesley implemented the change, Bs gained popularity, and the proportion of students graduated magna cum laude- the second highest honor for graduating seniors, dropped 4%, from 20% to 16%. In short, Wellesley’s grades are closer to a normal distribution than they were before.

But, since the policy applies only to certain departments, students in academic departments such as chemistry and economics, that weren’t subject to the cap, continued to receive slightly lower grades that students in departments which faced restrictions. As a result, grades did affect students’ choices of major; students did not leave the humanities in general but were more likely to switch majors within that field in general than they were pre-cap. Economics, the most popular major and a major unaffected by past grade inflation, gained new students while other social sciences classes saw their enrollment decline.

Wellesley’s policies also seem to be slightly discriminatory: African-American students as well as students with relatively low SAT scores saw a larger-than-average drop in grades. The researchers suggest that a more even grading policy across the whole college will do a better job demonstrating what students need more help.

In addition to nuancing Wellesley’s own policy, the researchers conclude that, since Wellesley’s grades are falling while other schools’ are rising, the only solution is for other colleges and universities to join Wellesley in combating grade inflation.

As the researchers have pointed out, efforts against grade inflation are not as equal across campuses: Harvard and Yale students are pitted against their Princeton and Wellesley counterparts for the same opportunities, but only some of those academically-comparable scholars have A-grades to support their abilities. This phenomenon of grade inflation in general and the different responses to it have to it prove that grade-giving is not as simple as it may seem.

Coming to Stanford made me feel much more conservative than I ever had before. Conversations in my dorm room and