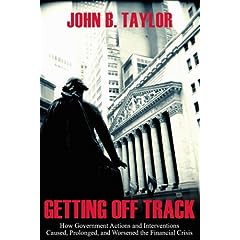 At least according to Professor John Taylor, Hoover fellow, professor of economics at Stanford and former adviser to Ronald Reagan and John McCain.

He’s not buying all the talk that squarely blames the free market system for creating the bubble that burst last year. Instead, Taylor has been publicly pointing out the role of government in the buildup to the financial collapse.

Then he published this op-ed in the *Wall Street Journal *and the great debate began.

Monetary excesses were the main cause of the boom. The Fed held its target interest rate, especially in 2003-2005, well below known monetary guidelines that say what good policy should be based on historical experience. Keeping interest rates on the track that worked well in the past two decades, rather than keeping rates so low, would have prevented the boom and the bust. Researchers at the Organization for Economic Cooperation and Development have provided corroborating evidence from other countries: The greater the degree of monetary excess in a country, the larger was the housing boom.

It was, in other words, Al Greenspan’s fault. Which is actually a pretty common conclusion.

Taylor is a basic free marketer, a proponent of meat-and-potatoes markey ideas; he even penned the introduction to economics textbook that Stanford uses, for God’s sake. He knows his stuff.

Some, however, have criticized his ideas: *The New Yorker *blog, The Balance Sheet, points out a flaw in Taylor’s timeline in a recent post. He think Taylor misread a graph:

So, in effect, Taylor is saying that even though the people who were setting prices for things like LIBOR and the like believed that Lehman’s failure really mattered, they were in fact wrong. The problem is that the graph that Taylor relies on as his only piece of evidence (it’s on p. 16 of his paper) doesn’t demonstrate what he thinks it does. In fact, LIBOR rose sharply in the days just before Lehman failed—evidence that even the prospect of Lehman going under had people worried. It then dropped a little when AIG was rescued, but then went straight up again, so that in the seven days leading up to and just after Lehman’s failure, LIBOR nearly doubled. That’s hardly a sign of the market shrugging off the incident.

This blog-battle cuts to the perhaps the most important (certainly economic) question of our time: who is to blame for the financial crisis?

A Brief Case for Crypto: What Bitcoin is, is Not, and Why D.C. Should Proceed with Caution

![](https://docs.google.com/uc?export=view&id=0B4t9VJLm_PWhckxzRm5vS2ZtOWM "Bitcoin")Bitcoins are becoming an increasingly accepted form of currency