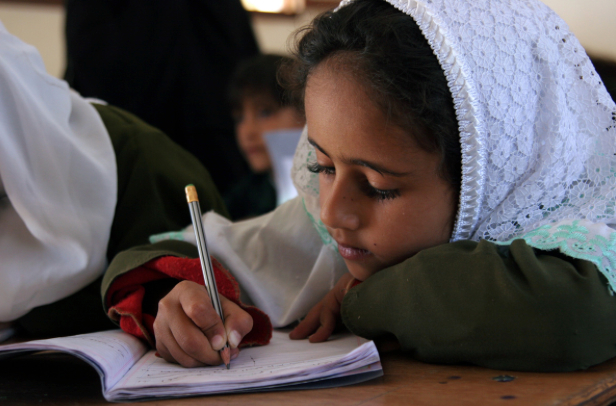 Terrorist organization Boko Haram, whose name means “Western learning is forbidden”, has declared a war on education. On April 14, the group abducted 230 Nigerian schoolgirls and captured the world’s attention. In addition to the recent kidnapping, Boko Haram gunmen killed dozens of schoolboys in February and September, and the terrorists have destroyed hundreds of schools in Nigeria.

The kidnapped girls’ parents certainly were aware of the risks of attending school in northern Nigeria: the girls only came to school to take their final exams. Even this is rare. Few Nigerian parents ensure their daughters receive any education; only 4% of Nigerian girls complete high school. However, there are substantial benefits to educating girls, especially in developing countries.

Educated girls can have a vital economic impact on developing countries. According to Melanne Verveer, a Georgetown professor and former U.S. Ambassador-at-Large for Global Women’s Issues, empirical data show that increasing girls’ education correlates with economic growth, increased agricultural yields and greater labor productivity. UNICEF reports that “a woman is more likely to get a job and earn a higher wage if she has a basic education: one percentage point increase in female education raises the average level of GDP by 0.37 percentage points. Every additional year of primary school boosts girls’ eventual wages by 10 – 20 per cent, and an extra year of secondary school by 15 – 25 per cent”.

It is difficult to promote women’s literacy and higher education in view of extremists’ religious mores, violence and poverty endemic in developing countries. The leader of the Boko Haram said that he was following Allah’s orders when his the group kidnapped the girls from their school. While Nigeria is the largest economy in Africa, the country is poor and has a per capita income of only $3,000. Nigerian families need school and income subsidies and to afford to spare their daughters from working instead of attending school. Nigeria needs programs designed for its cultural ecosystem that take into consideration issues such as the shockingly low life expectancy of 52 years among others in order to improve its literacy rate. Many external organizations that have done extensive surveys of the Nigerian people in order to understand them and offer programs that improve their lives.

A multitude of organizations including the Hewlett Foundation and the Gates Foundation, countries such as Germany, England, and the United States, and non-governmental organizations (NGOs) are tackling the women’s literacy problem. They point out that women are likely to pass their education on to their children and produce a multiplier effect for literacy and education. Their strategies include subsidizing school fees, creating safe school spaces, and tailoring school lessons for cultural differences.

One group, the U.S. Aid organization is involved in promoting literacy through various initiatives such as Mobiles for Education for Development (M4Ed4Dev).  M4Ed4Dev uses mobile devices and software to further education in developing countries.  Dr. Paul Kim, Stanford’s Chief Technology Officer, has worked on this initiative and studied the use of mobile devices in education in rural Mexico and India. M4Ed4Dev met at Stanford two weeks ago and explored literacy development.

“The beauty of mobile technology is that it is a supercomputer in your hand. It can do a lot of things for you,” said Dr. Kim in an interview with The Stanford Review. He believes that the mobile phone in particular offers great educational potential. “There is phenomenal penetration of mobile technology in developing regions. What I’m expecting is that many devices out there are transitioning into cell phones.” He noted, “In rural areas where they may not have electricity, they may not have internet access, they have a mobile phone.” Dr. Kim explained how mobile devices are transitioning to smart phones which can be priced at $20 and include Facebook and Google features offering a “lot of opportunities for educators including literacy development, youth development and career placement.” He pointed out that there are “three billion phones in our drawers, unused,” which could serve as educational tools in developing countries, following the development of user apps that need to be built around mobile technology.

Nigeria is a fertile ground for mobile device education. The literacy rate has decreased and primary school gross enrollment rates have dropped, indicating that a solution is needed to supplement brick-and-mortar schools. Since the rural population remains 50% of the total population and the poverty headcount ratio is 85%, mobile technology would provide a way for rural children to have access to education and could even allow them to work for their family while finishing their studies at home. As a bonus, leveraging mobile technology for education provides a way for children in developing countries like Nigeria to safely complete their lessons.

Dr. Kim headed up an education initiative that “leverages mobile devices to transform education in a way that is more student-centered, more inquiry-based.” He said education initiatives must “stay away from passive education.”  “We have so many ways to access information and knowledge, we need to help students become more expert in searching and investigating knowledge by themselves.”  Dr. Kim said everyone from NGO’s to for-profit companies should be involved in furthering education in developing countries.  “NGO’s can ignite the fire, but in order for it to scale, it must be done by the for-profit entities.

He said that businesses must see a potential profit to become involved in education in less developed countries, and that businesses are better than NGO’s at addressing the ecosystem or societal infrastructure of a country. “NGO’s can ignite the fire, but I think that in order for it to scale up and go at a massive scale it must be done by the for-profit entities,” he explained.  Dr. Kim said that Intel has been very successful in analyzing the ecosystems of developing countries and selling its Classroom tablet to them. For comparison, Dr. Kim cited that only 25% of the millions of dollars of laptops distributed by the non-profit One Laptop Per Child Universal Primary Education Project in Uganda are still in use.

Dr. Kim travels widely and has visited developing countries, and has concluded that he thinks it is important for anyone involved in education in developing countries to “understand the whole ecosystem.  It is not just about giving free drugs, food, etc. A lot of discrete approaches will not work.”  According to National Geographic, Nigeria has many advantages including being the fifth largest oil exporter and a middle class, but deep-seated problems including a weak army, corrupt government that has swallowed $31 billion in four years and violent extremists.  Clearly, any educational solutions have to take these factors into account and must reflect the country’s “status quo” as Dr. Kim suggests.

There are a few very important metrics that many people discount. He continued, “In African countries, life expectancy is very short.  There are no jobs. Youth development is missing.  There are no outlets.” Requirements for furthering education in developing countries include “Whole person education” and efforts to “protect and promote peace.”

Although the immediate focus in Nigeria is on getting the kidnapped girls out of the clutches of the Boko Haram, for the long term Nigeria and the rest of the world must move past this one crisis, one instant response mentality. Even raising education standards is not enough; a much more important issue is to fully change the mentality and behavior regarding education and to change education from being solely academic to being holistic.

Dr. Kim says that otherwise, “Education itself is meaningless.”